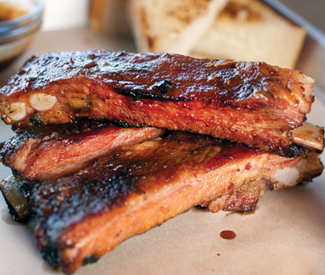 For a child of East, West, and Middle America, I have an unexpected and profound affinity for the music and food of the South. Traveling in the region, my love grows. Florida conch and stone crab, Tex-Mex and Texas brisket. But when I dream of the South, I think Deep South. Start talking low country and Gullah cuisine, or Cajun and Creole cooking, and I become brutally homesick for a home I never had.

Then there is the barbecue. And by barbecue, I mean pulled pork, those words being synonymous in the Deep South. Texas brisket? Naturally. Memphis ribs? Hell yeah. But pulled pork, that tender, shredded, fatty mound of piggy goodness, for me, is the pinnacle of BBQ. Don’t even get me started on sauces. South Carolina mustard or thick, sweet Kansas City sauce? I’ll take it all, thank you. A proper sauce turns impeccable meat into ecstasy.

One of the more memorable journeys the Renaissance Man and I ever took was a two-week road trip through four Southern states for BBQ, music, and food. Though I’ve been a California girl for the larger part of my life, in this glorious state of endless riches I rarely find barbecue comparable to that of my Southern exploits — even coming from those who claim to be Southern natives. There are whispers of true BBQ here, but often something indefinable is lacking. The problem commonly lies in sauces, smoking techniques and woods used, or the meat’s tenderness (I’m sorry: it ain’t real BBQ if it’s not fatty). Even delicious ‘que is missing a certain raw, gut-level sense of place outside the South.

Regardless, some worthy Bay Area spots have emerged to satisfy ‘que cravings. Uncle Frank’s was the best BBQ I’ve had in California, until it tragically closed last fall. Frank’s brisket was thick with fat, served in the back of a dodgy dive bar in suburban, staid Mountain View.

Bo’s Barbecue (3422 Mount Diablo Boulevard, Lafayette. (925) 283-7133, www.bosbarbecue-catering.com) specializes in solid brisket. Golden Gate Park golf course houses an unexpected gem, Ironwood BBQ (around 47th Ave., SF. (415) 751-8987, www.ironwoodbbq.com) which is strong on pulled pork. Years ago, Brother-in-Law’s BBQ morphed to Lilly’s and became Da Pitt (705 Divisadero, SF. (415) 440-7427, www.dapittbbq.com). Though past its glory days, it’s still a worthy detour, wafting glorious smoke aromas down the street. What of ever-popular Memphis Minnie’s (576 Haight, SF. (415) 864-7675, www.memphisminnies.com)? I must admit that despite a love for their rowdy Southern tunes and spirit, I can’t get behind the lackluster meats and watery sauces.

We go through waves of ‘que openings and we’re in the midst of another now. Here are five recent BBQ openings.

From Wednesday to Sunday, this pop-up kitchen in Rebel steps outside tradition with items like Kurobuta pork belly. But more than any of the other newer ‘que joints on this list, it gets Carolina-style pulled pork right — Sneaky’s is among the best in town. Only downside is the price — a single platter of meat and two sides is $17, a two meat combo $26, compared to $12 and $18 for the same options at CatHead’s BBQ.

Stand-outs: Aforementioned pulled pork is tops here, as is South Carolina mustard sauce (and they’re perfection together). Sneaky’s brings it with Creekstone Farms brisket and baby-back ribs. The outfit is to be commended for using all natural, hormone-free meats, smoked with locally-cut almond wood. Sides ($4) include a classic coleslaw, and fresh — not soggy or overcooked — collard greens. Cheeky points for Rebel’s fancified gay biker bar setting, and the majestic motorcycle that serves as the room’s centerpiece.

Nate’s BBQ had quite a following — not to mention coveted home delivery. It recently morphed into CatHead’s BBQ under the direction of Tennessee native Richard Park and Pamela Schafer, and has become one of the city’s best BBQ options. Thankfully, it still offers delivery. Vegetarians get a nod with cornmeal-crusted BBQ tofu. Mains are wonderfully priced at $7 with a mini-biscuit and pickles, while a platter with two sides is $12. Of note: large biscuits are aptly described as having the size of a cat’s head

Stand-outs: They had me with Coca Cola-smoked brisket. A subtle sweetness permeates the über-smoky beef. Ribs are also strong, the best of any place listed. The secret is extra fat, rendering the meat fall-apart tender. All sides ($4 each) are vegetarian, including mustard or spicy habanero slaw. Collard greens taste healthy, a fresh change of pace from traditional collards. Though I miss the ham hocks.

Tanya Holland of West Oakland’s beloved Brown Sugar Kitchen opened B Side Barbeque a few months ago, a hip, comfortable space lined with photos of African American cowboys. Look closely through the smoky, rich air and you’ll see Tanya and her husband in one of the old-timey shots on the walls.

Stand-outs: Pulled pork is tender and lush in Carolina mustard sauce, but they shine with smoked brown sugar-rubbed brisket ($9 half order; $16 full order). Fatty beef sings with sugary crust. Ribs are succulent. A side of fresh, spicy coleslaw ($4), light on the mayo, is a happy companion. Food is prepared with care, a step above many East Bay ‘que joints.

The Marina has itself a BBQ restaurant. Small, welcoming, and lined with rustic artwork and paraphernalia from Texas to the Carolinas, Cedar Hill is a big win for the neighborhood to the north. The ‘que is not as soul-satisfying as it is in the South, but has plenty to offer with dishes like Cajun shrimp on Anson Mills grits topped with andouille sausage and piquillo peppers ($17), or sweet tea-fried chicken ($7.50–$19 for a quarter to whole chicken).

Southpaw BBQ has the most welcoming, festive atmosphere of any of the new ‘que joints, with beer brewed right in the dining room, additional beers on draft (like Bruery Mischief, Brother Thelonious, and Deschutes Green Lakes), and a playful cocktail menu offering sazeracs made with Germain-Robin craft brandy and tea syrup.

Stand-outs: Slightly smoky Honey Bunny cocktail (blanco tequila, red pepper, orange and carrot juice, agave) is lively and fun. Platters ($14-19) come with cornbread and two sides. As much as I wanted to love the ribs, brisket and pulled pork, they bordered on being either dry or not as flavorful as other ‘que joints. Though not barbecue, fresh, flaky catfish ($14) from Louisiana is my favorite here: comfortingly fried and not at all fishy.