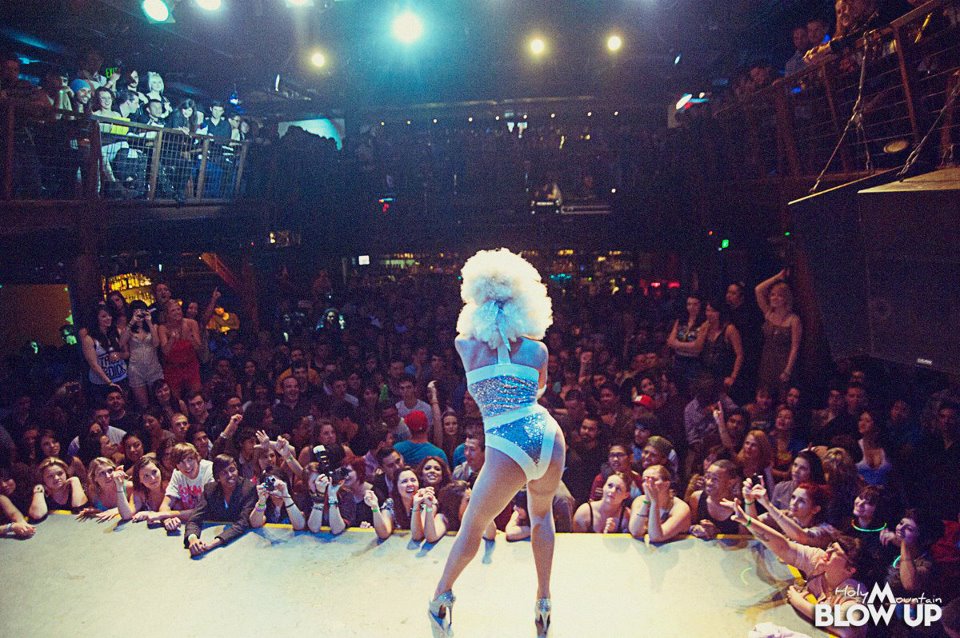 Is it weird that last night I found myself dancing around in my Underoos to Mother Nature’s wowser light show and bass mechanix? Outside the disco, thunder and lightning are rare commodities ’round these parts (they happened, like, maybe three times in the ’90s?), so please forgive me for flashdancing on my fire escape rather than hitting the dance floor. Sometimes you just gotta be a semi-private dancer in the elements, love.

Speaking of spring storms: Sad — but ultimately hopeful — word has came down the wire that two of SF’s best parties, Blow Up and Kontrol are calling it quits, at least in regards to their regular installments. Greg Bird of monthly techno blast Kontrol at the EndUp put out an eloquent statement about how each of the crew’s side projects had taken on lives of their own, and that June 3’s party would be the last, except for special events. Who could blame Kontrol, after seven years of outstanding live techno fun? In any case, we’ve still two months to bid adieu, so keep it together.

But fantastic electro-glamour gig Blow Up’s last weekly party is tonight Fri/13, and you know it’s going out with a bang.

No tears! Ultimate breathtaking hostess Ava Berlin assures me that seven-year-old Blow Up will be back and better than ever — she and ace DJ Jeffrey Paradise are taking off to the desert for a couple months to plan a relaunch and prepare for the continued success of Paradise’s sunny tech-pop outfit Poolside. Blow Up parties will return, no fear. And how perfectly SF is taking off for the desert to regroup for a few. Loving.

Tonight’s farewell Blow Up at DNA Lounge features damn fine remix crew RAC, which has the power to make everything it touches insanely catchy in an old-school electro-pop way, and DJ Miles, indie-hero resident of the lovely Popscene weekly party. Throw on something risque-bananas and toast the bon voyage of this essential piece of SF nightlife gorgeousness.

Besides those listed in this week’s Super Ego clubs column, here are some more party picks for the wet and wild weekend:

Ah, you dance music genius Curtis Jones — first you ruled the Chicago house scene in the early ’90s as Cajmere. Then you got REALLY freaky — anticipating both the fried and funkdafied antics of Moodymann and the acid-brained electroclash antics of Felix da Housecat. (And for good or ill we are about to experience an electroclash revival, heralded by Felix’s takeover of the Blow Up party last month.) He’ll be headlining the always bonkers Lights Down Low party, as part of host DJ Sleazemore’s birthday celebration.

Ever since the amazing Non Stop Bhangra parties moved to Public Works, the audience for this incredible party has exploded — so much so that the party will now take over both of the expansive club’s levels. To launch the upstairs dance room, Jimmy Love and the dholrhythms crew  are enlisting the aid of serious Arabic-vibing bass crew Hookahdome: Jef Stott featuring MC Rai, Kush Arora, Drumspyder, bellydancing, and more. It will be a sunburst of global insanity.

Essential second-generation Detroit techno innovator Kenny now lives in LA, but he’s as full of ideas and energy as ever (and he’s a pretty great guy to boot). While he hasn’t received as much attention as I think he should for his many contributions, that’s all starting to be rectified with renewed interest in some of Detroit’s less-lauded players. It helps that he’s been getting around a lot more, remixing recent tracks excellently, and playing splendidly! He’ll be joined by another Detroiter, Monty Luke, for a night of solid banging.

And here’s a mighty swell remix he did last year:

Twisted Berlin star DJ Kaos does have a bit of a reputation for being, well, chaotic in a party way — what do you expect from such a force of nature behind the decks? Still, his “disco-dusted” tunes, perfect gateways to sexy debauchery, are also glimmering slices of urbane perfection. High mixed with low, at the groovy No Way Back party with beloved local DJs Conor and Solar, returning to the awesomely reurbished 222 Hyde. Go get down.

Fresh from his night with Kenny Larkin, Monty Luke — a Detroiter with deep SF roots — will be turning the children of the routinely packed and queer-fab Honey Soundsystem Sunday party out. Monty’s been known for a heady blend of bass funk with acid highlights and deep grooves. Lately he seems to be delving into the more cosmic reaches of the classic techno sound, which I will never argue with. This will be a perfect way to round off your weekend in style.