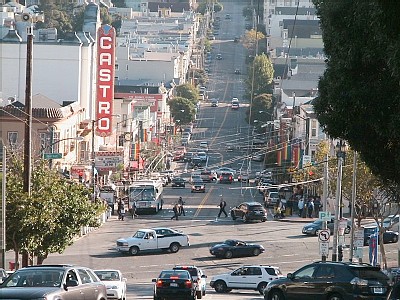 San Francisco’s bicycling community is bracing for a backlash following the second recent case of a cyclist hitting and killing a pedestrian, particularly given a callous online posting by someone claiming to be the cyclist, whose 71-year-old victim this week died of injuries sustained a week ago at the intersection of Castro and Market streets.

The case was a hot topic at last night’s monthly Carfree Happy Hour, a gathering of cyclists, transportation professionals, and alternative transportation activists, many of whom had unearthed new information about a case they’re all grappling with. And the consensus opinion was that the cyclist seemed reckless and may deserve to face criminal charges.

Yet activists also sought to place this case in context, noting that an average of almost three pedestrians are hit by cars everyday in San Francisco, even though that rarely makes headlines. There were 220 pedestrians killed in San Francisco from 2000-2009, the vast majority hit by cars whose drivers rarely faced criminal charges. In fact, the same week that Sustchi Hui was killed there was another pedestrian killed by a motorist and another one by a Muni bus.

But that doesn’t lessen the importance of this latest bike-vs.-pedestrian fatality, which is sure to make news precisely because it’s so rare, and because it comes just weeks after 23-year-old Randolph Ang pled guilty to vehicular manslaughter for running a red light at Embarcadero and Folsom Street in July 2001, hitting a 68-year-old woman who later died from her head injury.

Someone who identified himself as Chris Bucchere posted a note on the Mission Cycling Google group on the afternoon of the incident, March 29, describing an accident that apparently took place at the same time and place. And the description that Bucchere gave of the accident is not likely to garner much public sympathy for him (We contacted Bucchere by e-mail and telephone, we’re waiting to hear back for him, and we can’t independently confirm the authenticity of the message or its contents).

“I wrecked on the way home today from the bi-weekly Headlands Raid today. Short story: I’m fine. The pedestrian I clobbered? Not so much,” the message began.

The post then goes on to describe the incident, which matches the details of other reported accounts of the fatal crash: “Around 8 am I was descending Divisidero Street southbound and about to cross Market Street. The light turned yellow as I was approaching the intersection, but I was already way too committed to stop. The light turned red as I was cruising through the middle of the intersection and then, almost instantly, the southern crosswalk on Market and Castro filled up with people coming from both directions. The intersection very long and the width of Castro Street at that point is very short, so, in a nutshell, blammo.”

Another member of the Carfree Happy Hour group who is a regular competitive cyclist said that Bucchere was a member of the website strava.com, which tracks minute-by-minute data of cyclists for training purposes. And this source said he was able to use the site to determine that Bucchere was traveling through the intersection – which is at the bottom of a steep hill – at approximately 35 mph at the time of the collision.

Bucchere’s message continued: “The quote/unquote ‘scene of the crime’ was that intersection right by the landmark Castro Theatre – it leads from a really busy MUNI station to that little plaza where The Naked Guy always hangs out. It was commuter hour and it was crowded as all getup. I couldn’t see a line through the crowd and I couldn’t stop, so I laid it down and just plowed through the crowded crosswalk in the least-populated place I could find.

“I don’t remember the next five minutes but when I came to, I was in a neck brace being loaded into an ambulance. I remember seeing a RIVER of blood on the asphalt, but it wasn’t mine. Apparently I hit a 71-year old male pedestrian and he ended up in the ICU with pretty serious head injuries. I really hope he ends up OK.

“They asked me a bunch of stupid easy questions that I couldn’t answer, so they kept me for a few hours for observation, gave me a tetanus shot and sent me on my way.

“Anyway, other than a stiff neck, a sore jaw/TMJ, a few bruises and some raspberries, I’m totally fine. I got discharged from the hospital during the lunch hour. The guy I hit was not as fortunate. I really hope he makes it.

“The cops took my bike. Hopefully they’ll give it back.

“In closing, I want to dedicate this story to my late helmet. She died in heroic fashion today as my head slammed into the tarmac. Like the Secret Service would do for a president, she took some serious pavement today, cracking through-and-through in five places and getting completely mauled by the ragged asphalt. May she die knowing that because she committed the ultimate sacrifice, her rider can live on and ride on. Can I get an amen?

“The moral of this little story is: WYFH”

Several members of the newsgroup took issue with the lesson Bucchere claims to have learned : WYFH, or “Wear Your Fucking Helmet.” One poster wrote, “I’m not sure that’s the moral of the story,” to which several others agreed. Another poster wrote: “What were you thinking ? As a 15 year sf resident and a 10 year cyclist and a pedestrian at that intersection every weekday .. I’m kind of embarrassed to wear my mc kit anywhere nearby now. I truly hope you’ve learned your lesson but I’d have to say this is not the end of the story for you, and yes you should get yourself a lawyer.”

Recent studies have shown that San Francisco is a dangerous city for pedestrians, but not as dangerous as many other cities on a per capita basis given our density and high pedestrian populations. A study released in January by the Alliance for Biking & Walking concludes San Francisco has the third highest biking and walking levels among major US cities, but ranks eighth in bicycle and pedestrian fatality rates.

A 2011 study by the group Transportation for America, “Dangerous by Design,” analyzed factors associated with pedestrian deaths – some of which seem to be at play in this case – and concluded, “Especially when combined with unsafe street and road design, vehicle speed presents a deadly threat to pedestrians.”