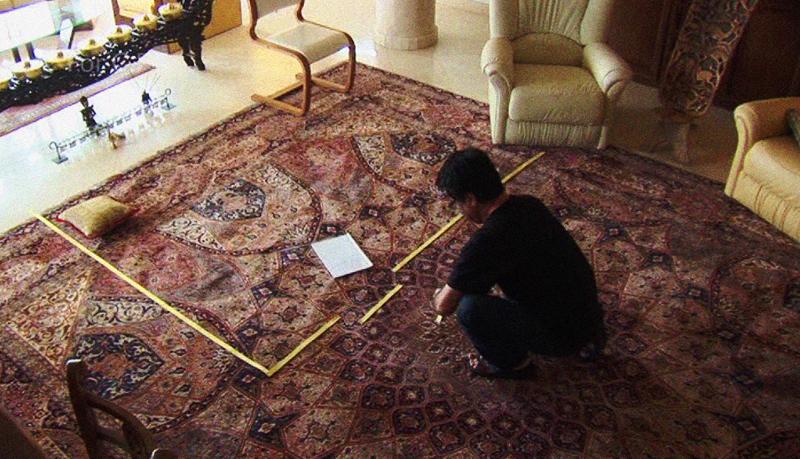 Of slightly more urgent, politically relevent, Celine Dion-less note, check out Sam Stander’s review of This Is Not a Film, a movie by embattled filmmaker Jafar Panahi that was literally smuggled out of Iran on a flash drive hidden in a cake. It opens Fri/13 at the SF Film Society Cinema (a zone soon to be taken over by the upcoming San Francisco International Film Festival, kicking off April 19).

If you’re an artist yourself, possibly one who looks spiffy in a pair of chaps, the Folsom Street Fair (which has a new date this year!) has put out a call to independent filmmakers interested in working on a planned documentary on “the grandaddy of all leather events.” From the Folsom Street Events press release:

“Demetri Moshoyannis, Executive Director, said, ‘As Folsom Street Fair approaches its 30th anniversary, Folsom Street Events is seeking an independent filmmaker to help document our rich, diverse, and sometimes salacious history. With so much film talent in California, across the U.S., and even abroad, we believe that the development of Folsom Street Fair is a compelling story that must be shared.’ Jacob Richards, Board President, added, ‘The Board of Directors has agreed to provide support for the project in the form of a very modest grant (if requested), fundraising appeals to its donor base, access to historical documents and agency contacts, and more. We are hoping to receive a broad range of proposals from diverse filmmakers.'”

Head to www.folsomstreetevents.org for more info.

And if you’re simply looking for a new movie to see (The Hunger Games has grossed $373,330,642 worldwide … so far. Katniss Everdeen, you’ll never go hungry again!), you can geek out with Morgan Spurlock‘s fun doc Comic-Con IV: A Fan’s Hope; check out Moroccan filmmaker Ismaël Ferroukhi’s latest, Free Men; see a couple of American Reunion cast members moonlight in the hockey flick Goon; and learn more about the recently-in-the-news-for-hopeful-reasons-for-once country of Myanmar in doc They Call it Myanmar: Lifting the Curtain. Reviews follow.

Comic-Con IV: A Fan’s Hope When what is now known as the San Diego Comic-Con International launched in 1970, attendance consisted of a couple hundred comic-book fans. Now, it’s a huge event thronging with hundreds of thousands of geek-leaning movie, TV, video game, and — oh, yeah — comic-book fans; it’s also become an essential part of the hype-building machine for every major pop-culture property. Super Size Me (2004) director Morgan Spurlock’s lively doc examines the current state of Comic-Con with input from those who’ve ridden the nerd train to fame and fortune (Joss Whedon, Guillermo Del Toro, Stan Lee) — but the film’s most compelling sequences zero in on a handful of ordinary folks obsessed with the event for a variety of reasons. There’s the proprietor of a Denver comics shop, a 38-year Comic-Con veteran, faced with the chilling prospect of having to sell his most valuable (and most beloved) comic in order to keep his business afloat; the Carrie Brownstein look alike who spends the entire year crafting incredibly detailed costumes for Comic-Con’s annual masquerade contest; the soldier and family man who dreams of drawing comics for a living; and the sweetly dorky young man nervously planning to propose to his girlfriend … during a Kevin Smith panel. To its credit, Comic-Con IV never mocks its subjects, and it manages to infuse its many storylines with surprising emotional depth. Extra points for the clever, comics-inspired transitions, too. Director Spurlock appears in person for post-film Q&As Sun/8 at 5 and 7:30pm shows. (1:26) Vogue. (Cheryl Eddy)

Free Men Amid moderate hoopla for Casablanca‘s 70th anniversary, it’s a good time for something that was a whole lot more common back then — a wartime drama not about battle or victimization, but espionage intrigue crossing the lines between military, diplomatic, and civilian sectors. Arrested for participating in the black market in the occupied Paris of 1942, North African émigré Younes (Tahar Rahim from 2009’s A Prophet) evades prison or deportation by agreeing to spy on a local mosque suspected by the Nazis of harboring and smuggling out Jews. His clumsy efforts are quickly found out by a visiting imam (Michael Lonsdale), with the result that Younes — whose brother (Farid Larbi) is already a committed fighter in the Resistance underground — winds up playing double-agent, pretending to serve the police and SS while actually working against them. En route he becomes entangled in the disparate agendas of others including Leila (Lubna Azabal), who’s secretly involved in the Algerian liberation movement, and Salim (Mahmud Shalaby), an apolitical, bisexual singer whose career ambitions blind him to the personal dangers he risks. Ismaël Ferroukhi’s handsome, twisty drama won’t have you white-knuckling the armrests, but it’s an intelligent, satisfying throwback to the colorful characters and narrative intricacies of another era’s cinematic melodramas — with the welcome update of making non-white players our protagonists rather than “exotic” support players. (1:39) Lumiere, Shattuck. (Dennis Harvey)

Goon An amiable Massachusetts bar bouncer who’s the odd one out within his highly-educated, high-achieving Jewish family (led by Eugene Levy), Doug Glatt (Seann William Scott) can punch your lights out as easily — and with as little malice — as he’d flip a light switch. That skill looks useful to a local hockey team in need of an enforcer to disable relevant members of the opposing team when needed, then sit in the penalty box. Soon “Doug the Thug’s” burgeoning reputation brings him to the relative big leagues of Halifax, where his main job for the Highlanders is protecting a star (Marc-André Grondin) who’s been skittish since his serious bruising at the hands of “Ross the Boss” (Liev Schreiber), our hero’s veteran equivalent. Based very loosely on Doug “The Hammer” Smith’s memoir, this latest from director Michael Dowse (2004’s It’s All Gone Pete Tong) and co-scenarist Jay Baruchel (who also plays Doug’s incredibly crass best friend) is a cut above most Canadian hockey comedies — which, trust me, is not saying much. But it is indeed rather endearing eventually as an exercise in rude, pretty funny yet non-loutish humor about oafish behavior. A lot of its appeal has to do with Scott, who is arguably miscast and somewhat wasted as this “Hebrew Dolph Lundgren” — the actor’s forte being manic, impulsive, near-lunatic rather than slow-witted characters — yet who helps Goon maintain a no-foul friendliness in inverse proportion to its face-mashing action on ice. The writing could be sharper, but apparently there is only room for one smart hockey satire in our universe, and that spot was taken by Slap Shot 35 years ago. (1:30) Lumiere. (Harvey)

They Call it Myanmar: Lifting the Curtain Recent elections signal that Myanmar’s status as “the second-most isolated country on the planet,” per Robert H. Lieberman’s doc, may soon be changing. With that hopeful context, this insightful study of Myanmar (or Burma, depending on who’s referring to it) is particularly well-timed. Shot using clandestine methods, and without identifying many of its fearful interviewees — with the exception of recently-released-from-house-arrest politician Aung San Suu Kyi, a Nobel Peace Prize winner — They Call it Myanmar offers a revealing look at a country largely untouched by corporate influences and pop culture. Myanmar’s military dictatorship is the opposite of a cult of personality; it’s scarier, one subject reflects, because “it’s a system, not an individual,” with faceless leaders who can be quietly be replaced. The country struggles with a huge disconnect between the very rich and the very poor; it has a dismal health care system overrun by “quacks,” and an equally dismal educational system that benefits very few children. Hunger, disease, child labor — all prevalent. Surprisingly, though the conditions that surround them are grim, Myanmar’s people are shown to be generally happy and deeply spiritual as they go about their daily lives. A highlight: Lieberman’s interactions with excited Buddhist pilgrims en route to Kyaiktiyo Pagoda, with an up-close look at the miraculously teetering “Golden Rock.” (1:23) Bridge. (Eddy)

And if none of the above are weird or insane enough for your tastes, the new series at the Vortex Room, “Starship Vortex,” will not, we repeat not, in no way, shape, or form, let you down. Blast off!