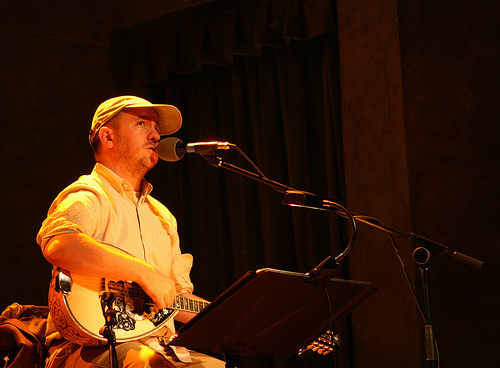 While the Magnetic Fields’ newest album, Love at the Bottom of the Sea, recaptured the group’s love for synthesizers and electronics, Saturday night’s Fox Theater performance was a testament to the timeless quality of its stripped-down acoustic format.

Using a charming setup of mandolin, acoustic guitar, accordion, piano, and cello, the band burned through 25-plus songs from various points in its two decades-strong career. The first plucks of opener “I Die” quickly established Stephin Merritt’s morose rumble of a voice — which sounded just as drolly beautiful and unbelievably deep as it does on record — and quickly hushed the impressively diverse crowd populated with theater geeks, punk rockers, old-timers, and lovey-dovey hipster couples.

It didn’t take long for the band to begin tackling songs from its landmark 1999 album, 69 Love Songs. Tracks like “A Chicken With Its Head Cut Off” and “Busby Berkeley Dreams” elicited giddy responses amongst the audience and led to more than a few people lightly singing along. An unexpected treat came when Merritt took lead vocals on “Come Back From San Francisco,” a track that was sung by member Shirley Simms on the album.

Speaking of Simms, vocal duties were shared among her, Merritt, and Claudia Gonson all evening, which helped keep things lively and unpredictable. Just as Merritt had taken over for her on “Come Back From San Francisco,” Simms reciprocated with a rousing rendition of his “Fear of Trains,” from the country-influenced The Charm of the Highway Strip.

With such a big catalog to compose a setlist from, nearly every album was represented, from the baroque sounds of Realism (“You Must Be Out of Your Mind), to the noisy Distortion (“Drive On, Driver”) and early favorites like Distant Plastic Trees (“Tar-Heel Boy”). Arrangements of all of these were simple and elegant, and a real testament the talent and attention to detail of each member.

Merritt’s well-documented prickly personality shone through at times in agitated comments to the crowd about flash photography and unnecessary hooting and hollering. And, if basing an opinion strictly off of body language, it really seemed like he’d have rather been anywhere else than on stage all show. None of that took away from what was a wholly fun, engaging and heartwarming show, however, which even at a packed 90 minutes felt all too brief.