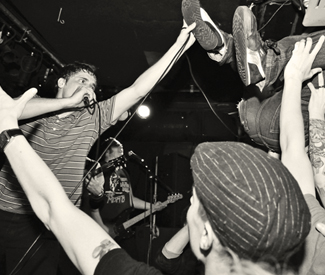 MUSIC East Bay ska-punk band Operation Ivy was arguably one of the most influential underground bands of all time. Not only was it a major influencing force behind the ska-punk boom of the 1990s, but lead singer Jesse Michaels’ angry yet intelligent, politically minded lyrics resonated with thousands of frustrated teenagers for years to come. Yet, the band never achieved much in the way of success until after it broke up in 1989.

“I never expected it to make any impact, but it did, which creates a different view of the past than what actually happened,” says Michaels. “We just played a little music and attracted a modest amount of attention. Everything that happened afterward — influence, the sense of history — it all feels kind of like a movie that people are making up.”

It wasn’t until 2008, when he formed Classics of Love, that he finally fronted a group with as much immediacy and chemistry as Operation Ivy. His bandmates — Morgan Herrell, Mike Huguenor and Max Feshbach, also known as San Jose post-punk trio, Hard Girls — offset Michaels’ ’80s hardcore-style songwriting with warm guitar tones, indie-rock sensibilities, and a musical virtuosity Operation Ivy never knew.

“From the first note we played together it worked. I had never experienced that before,” Michaels says.

The foursome got together thanks to Mike Park from Asian Man Records. Michaels was looking for musicians to play on his solo album that Asian Man was planning to release. Park recommended Hard Girls.

Huguenor didn’t know what to expect before meeting Michaels. “I was really nervous because when you think of his lyrics, you think of someone who is really concerned about social issues. There aren’t many songs he’s written that have a lot of humor in them,” he says. “It turned out he was down with jokes about weird stuff that would make Freud puke, so it was OK.”

This musical and interpersonal chemistry led Michaels to scrap the whole solo record idea and instead form a group with Hard Girls. Michaels brought in blueprints for songs, but the group worked together as a whole to arrange the songs.

Classics of Love released its self-titled debut full-length on Feb 14. The album rides a line of old and new punk rock — it showcases subtly complex instrumentation that still manages to sound raw.

The record’s engineer Jack Shirley, who is also the guitarist for Comadre, helped give the album its unique sound quality. Working with one of his musical heroes, Shirley was also relieved to learn that Michaels was down-to-earth. “You can tell he understands the importance of Op Ivy, but he’s not the least bit arrogant about it,” Shirley says.

Michaels is not only modest about the impact he’s had on so many people, he at times is downright uncomfortable with it.

More than two decades after Operation Ivy split, Michaels continues to write exceptional punk songs and finds simple joy expressing himself through music. Of course, it helps that he found those like-minded bandmates.

“Jesse is a weirdo and Morgan, Max and I are weirdos. We hang out and say horrible things that mostly don’t make sense. That’s how you get through life,” Huguenor says.

With Joyce Manor, Gnarboots., and Kill the Bats