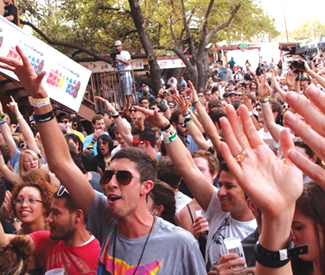 MUSIC To be at SXSW is to know you’re missing out on a lot of good music. Fortunately the music you do see makes up for the difference, and very often it’s the unexpected showcases, the things that weren’t on your radar until that very moment, that end up being the highlights of your experience. That said, here are some of my impressions from this year’s slate:

On the way to the ZZ Ward show I stumbled upon Grupo Canalon playing on a street corner. Incidentally, a friend from SF had recommended it as an act that shouldn’t be missed. The group hails from the town of Timbiqui in Cauca and plays traditional Afro-Colombian roots music, with lots of percussion, a marimba, and a capella vocals. Even the hipsters on Sixth Street couldn’t resist dancing.

Amid an extended sound check plagued by feedback, a frustrated ZZ Ward assured the Bat Bar audience that her performance would be worth the wait. The words seemed cocky in the moment but she and her band delivered. Based in LA, the chanteuse’s “dirty blues with beats” sound has gathered its fair share of buzz and she seems to have the poise and the chops to become a star.

As I walked through the heart of Sixth Street not only was every venue overflowing with showcases but it was hard to swing a stick without hitting an “unofficial” street showcase. I snapped photos of two guys furiously strumming acoustic guitars in front of the Ritz Theater. When asked what their band’s name was, the taller one replied “Well I’m Mike and he’s Gabe… that’s as far as we’ve gotten.”

In the afternoon I wandered downtown only to run into Andy and Christian of San Franpsycho. They had a rack of clothes and a mobile screenprinting setup — representing SF style deep in the heart of Texas. As we commiserated about the craziness that is SXSW, SF local Danny Lannon of The Frail happened by.

Then it was off to catch a few songs by the White Eyes at the Taiwan music showcase. Frontperson Gau Xiao-gao was festooned in a nude leotard with fabric streamers while she led her band through the punk and straight-forward rock paces.

Later on I went to Spinlet’s All Africa party at Copa. After some confusion about the schedule, Kenya’s Sauti Sol took the stage. The first thing to notice about Sauti Sol was the band’s incredible clothing. The musicians were all wearing these beautifully tailored kanga-print jackets with beaded epaulets. En masse it kind of resembled an East African Sgt. Pepper’s Lonely Hearts Club Band. The second thing to notice was the great music. It navigated effortlessly from rocking out to singing soaring harmonies, all the while spontaneously breaking into lockstep dancing. The crowd ate it up.

At the big SPIN blowout Santigold‘s rhythm section entered the stage wearing Max Headroom-esque caps, her backup singers came out in outfits that were a spin on matador chic, then Santigold herself finally came out donning a crown. While her big hits like “L.E.S. Artistes” sent the crowd into frenzied sing-a-longs, her new material was received almost as enthusiastically, boding well for her album release come April.

At the globalFEST showcase the crowd was enjoying the sounds of Janka Nabay and the Bubu Gang, M.A.K.U SoundSystem, and Chicha Libre. Boston’s Debo Band closed the night with its take on retro Ethiopian pop music. I first caught the band a little over a year ago and since then its live act has grown by leaps and bounds. The band has been working with producer Thomas “Tommy T” Gobena of Gogol Bordello and it seems it learned a few things from the Gogol performance playbook. Keep an eye out for its release later this summer.

As I crossed the threshold into Empire Auto’s warehouse space I was enveloped in a complete sensory overload. The room was bathed in a light that made it feel like the crowd was hanging in suspension, and dubstep producer Starkey had that crowd feeling his beats. Literally. The bass was so pounding that it rattled my organs. A few minutes later the bass cut out completely, leaving the crowd adrift as Starkey protested over the PA “Yo, I wasn’t even in the red! Is anyone out there even working?”

The production manager told me that the bass was so heavy that it had knocked Starkey’s laptop off his table, and they were trying to get him to take it down a notch. Yet the thing the manager was even more worried about was that Daedelus was returning to the venue later that evening. Apparently two nights before his bass was so relentless that it had blown two woofers, cracked two windows, and fried the hard drive of the computer delivering the club’s visuals. Hopefully that night didn’t go out with too much of a bang.

Over at the Nat Geo showcase Israeli culture-clasher Balkan Beat Box was rocking songs from its newly released album Give. One track that had particular traction was “Enemy in Economy,” which details leader Tomer Yosef’s experience being taken for a terrorist on an Alaska Airlines flight. The crowd couldn’t get enough of the song’s hook “Welcome to the USA/we hope you have a wonderful day.”

Meanwhile Nigerian-German singer Nneka was inside playing her beautiful blend of politically conscious music. My SXSW experience closed out with Jimmy Cliff‘s set on the patio stage. By kicking things off with “You Can Get It If You Really Want” he wasted no time in giving the capacity crowd what they really wanted. As the patio tent got progressively more hazy it seemed the perfect moment to bid adieu to the festival and make my way home.