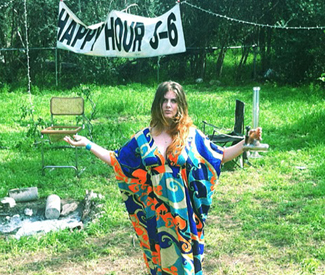 HERBWISE DIY pop star Lisa Dank doesn’t smoke marijuana to help with her art — smoking weed is her art. The Seattle singer-producer — known for her florid, handmade costumes and gonzo stage presence — crafts odes to cannabis (check out her aural fixation at www.soundcloud.com/lisa-dank), and has a day job at 4Evergreen Group, a patient network that supplies legal and educational resources to its members, as well as physician recommendations for medical marijuana.

Dank was headed down to South By Southwest to do shows at house parties and on the street with the aide of a PA system jacked into her car, but she managed to snag an artist wristband and also logged in hours in the green room chatting with performers about weed culture today. She’ll be publishing her findings in 4Evergreen Group’s new bi-monthly lifestyle magazine — but first, we got her to share her favorite snippets from South By.

TOP 11 MEDICAL MOMENTS FROM A POTSTAR AT SXSW

1. My Omicron hash oil vaporizer pen. Didn’t leave my side. Not even on the airplane. ‘Nuff said.

2. Austin loves pot. Especially at the Wells Fargo. Every time I went to withdraw cash, the point was brought up that I work in the medical marijuana industry. These boys couldn’t get enough! They sang the praise of medical pot (literally — shouting and fist-pumping.) They even brought out their camera-phones to show me the NORML cop car rolling around town.

3. MPP (Most Popular Piece): Quartz glass pieces are popular amongst locals and musicians for their affordability, cleanliness, and durability. Local glass pieces were a close second. Note: My all-star award goes to the editor of UC Berkeley’s student newspaper, who pulled out a gorgeous hand-blown, sandblasted Sherlock similar to the work of glass artist Snic. The editor had bought it at the smokeshop across the street from campus on Bancroft Way. We loaded bowl after bowl of Sour Diesel and Grape Ape six feet from Diplo in the VIP section of Speakeasy’s rooftop patio all Tuesday night, as Teki Latex and the Sound Pelligrino team did their thing.

4. Let’s just say Talib Kweli and his crew are fortunate that I have such a good weed connect in Texas.

5. Chali 2na smokes joints! Hemp extra-long! He had his own stash but took my number just in case. You can never have enough weed connects in Austin. He’s also a sweetheart because he let me use one of his papers.

7. Bands on the run: Brick and Mortar (from New Jersey), Fox and the Law (Seattle), and The Sundresses (Cincinnati) stocked up on buds at home and drove slow all the way down to Austin.

8. Sub-pop recording artists Spoek Mathambo and Thee Satisfaction enjoyed the relief brought forth by the herb after a long walk and checking out Sub Pop’s great showcase at Red 7 on Friday night.

9. Strain trend: Sour Diesel. My guy had it. When he was out, the pedi-cab that I tried to buy from told me he had Sour Diesel too. Just hours later on the official SXSW artist’s deck-lounge at the Austin Convention Center, some locals pulled out two grams of S.D. to roll up in our blunt.

10. Underground future-super-producer Dubbel Dutch had a quandary for me: “I can’t smoke weed anymore! I used to smoke weed every day when I was younger, but now I take one hit and I’m done!”

I explained to him the brain schematics of cannabis, how we have cannabinoid receptors built into our brain but don’t produce cannabinoids endogenously. I hypothesized that his adult brain’s super-sensitivity to THC was due to his excess smoking during the formative years of his brain’s development. I told him he’d trained his brain to be extra-receptive to cannabinoids.

11. Smoking joints throughout my house party set. And for that I thank you, kids of Wilson House.