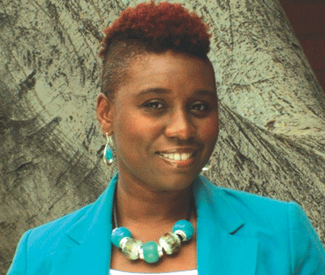 LIT In Redefining Black Power (City Lights Books, 206pp, $16.95), Joanne Griffith’s assemblage of her interviews with black thought leaders, Obama is not the focus, but his presidency is the frame. Journalists, activists, an economist, a theologist who wrote speeches for Martin Luther King, Jr. — each chapter of the book is a dialogue faithfully transcribed from Griffith’s well-informed questionings, reminding readers that the fight for expanded democracy in the United States didn’t end when the brand-new First Family took the stage that night in Chicago’s Grant Park.

Because when it comes to the fight for equal rights in this country — as economist Julienne Malveaux quotes from Lauryn Hill in her Redefining Black Power interview — “it’s not what you get, it’s what you keep.”

Griffith wants to make sure that the words of black leaders are kept in history’s permanent ledger. The Redefining Black Power project was born after she visited KPFK in Los Angeles, where the Pacifica Radio Archives are kept. The archives, a repository for interviews with African American leaders going back for decades, inspired her role as a modern day chronologist. With the help of Brian DeShazor, director of the Archives, Griffith has been airing one historical interview a week on her BBC Radio 5 Sunday evening show.

She also started conducting interviews herself. This edition of Redefining Black Power (she hopes there will be more) is structured as a look at the state of black America since President Obama ascended to the Oval Office, public fist bumps, and dolorous battles over health care.

The book is important, more readable than you’d think interview transcripts would be, and includes seldom-heard perspectives like those of an activist who refuses to vote and calls President Obama “crack” for African Americans, and a Ghana-born New York journalist who asserts we must never forget what it meant when Malia Obama wears her hair in twists.

Griffith acts as the conduit of information, rarely the pontificator herself. That’s why we tapped her for a Guardian interview via email last month, eager to hear what she’s learned about black power today.

SFBG: Explain where the interviews in the book came from. How did you become acquainted with the Pacifica Radio Archives and why are they important?

JG: The idea for the Redefining Black Power Project, of which the book is part, was born out of the historic audio held in the Pacifica Radio Archives, a national treasure trove of material charting America’s history from a progressive perspective dating back to 1949. But it was one recording of Fannie Lou Hamer addressing the 1964 Democratic national convention that sparked the idea for Redefining Black Power. Brian DeShazor heard the tape and wanted to find a permanent way to preserve and share the voices held in the Archives with a wider audience, and what better way than through the written word? Brian approached City Lights Books with the idea, and this book is the result, drawing on the voices of history to link us to the election of Barack Obama, one of the most significant moments in the social and political history of the United States. Through this project, we hope to preserve the voices, opinions and perspectives of African-Americans in this so called ‘Age of Obama’ for historians to digest and explore in years to come.

How did I get involved? As a complete audio nut, I always make a point of visiting local radio stations wherever I travel in the world. Back in 2007, I was in Los Angeles, called KPFK to arrange a visit and was introduced to the Pacifica Radio Archives. Because of this work and the extensive list of people I have interviewed over the years, Brian invited me to do the interviews for the Redefining Black Power project. Through this book, we delve into the role of the activist from different perspectives; the legal system, the media, religion, the economy, green politics and emotional justice.

SFBG: Was there an interview from the book in which your subject’s answers deeply surprised you?

Joanne Griffith: It was Dr Vincent Harding, the man behind Dr. Martin Luther King Jr.’s “Beyond Vietnam” speech that surprised me the most. A true veteran of the civil rights movement, he made the point that the election of President Obama was never the goal of the movement; instead he prefers to call the work “the movement for the expansion and deepening of democracy in America.” Put this way, it made me realize more than ever, that the work we do today is not in isolation, but part of a wider movement, stretching back all the way to slavery. And the work isn’t over.

SFBG: Who should read this book? How should it be used?

JG: Use it as a conversation starter to discuss issues in your own community. Parents, use it as a way to engage your children in history. Students, use it as a resource for papers on race and the Obama presidency. Most importantly, everyone, share your thoughts at www.redefiningblackpower.com. This book is not the end of the project; we’re only getting started.