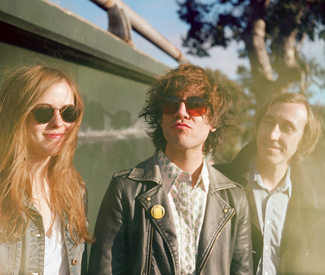 The next morning at 11 a.m., the traveling Burger pen would play a pre-South By Southwest Burger blowout. Then it was off to Austin for the official SXSW showcases. A few more shows along the way, and now shattered fragments of the unofficial posse will hit the impressively titled Burger Boogaloo fest in San Francisco this weekend.

It’s a mix of Burger bands and acts that play the fall SF festival, Total Trash Fest (some are one in the same). The Boogaloo began when Total Trash organizer Marc Ribak contacted Burger last year with the idea and it snowballed organically from there, says Bohrman.

It’s no huge surprise that Ribak, who is also a member of Rock N Roll Adventure Kids, and the Burger dudes hooked up — they have similar styles and lots of crossover acts.

“Music in general is a huge web — everyone is connected. That is my favorite part — who produced what, who recorded what, what bands everyone was in before,” Bohrman says. “To just be following the web, to be creating our own web, has been really amazing and awesome.”

Burger began as a way for Bohrman and longtime pal Lee “Noise” Rickard to put out their own music, Thee Makeout Party — a bedroom rock band formed in Anaheim in 2001. The label really started in 2007 when Bohrman and Rickard were cruising around in nearby Fullerton, Calif. one day talking about putting out a record for another friend’s band, Audacity. They decided to put it out, and thus an indie label was born. Burger has since dispersed 50,000 cassette tapes from more than 200 bands, and released over 15 LPS.

In 2009 Bohrman was hoping to tour with Thee Makeout Party but his job wouldn’t let him go. He quit, cashed out his 401k and funneled it back into the label, also purchasing a storefront in Fullerton with Brian “Burger” Flores, which would become the Burger Records store. It’s naturally the buzzing hub of the empire.

Whenever Vermont-born, LA-based King Tuff (aka Kyle Thomas, also of Happy Birthday) visits the store, he says he essentially walks away with a new record collection. “They’ve created a family — I go down to the record store and just hang out. It’s really like we’re all part of something.”

While King Tuff is officially signed to Sub Pop — which he also describes as having a familial atmosphere — he also is a part of the greasy outstretched arms of Burger (it put out his limited, personalized LP Was Dead). While the acts may be loosely tied together as friends, there’s no set of rules dictating what makes a Burger band.

“We’ve been successful by putting out stuff we really love, not beholden to any genre. This is our life. We can do whatever we want. There’s no ceiling above us. We can do anything, even if it seems impossible,” says the endlessly upbeat Bohrman.

His voice slightly raising, he adds, “The music means something to us. When we hear music it’s not ‘are we going to be able to sell this in a commercial’ or something. It’s about people making awesome music, not selling the songs for a Pepsi commercial.”

That’s how King Tuff grew up making music as well, without the predetermined rules of industry. He recalls his dad bringing home a guitar one day when he was in fifth grade, picking it up, and learning to play. “I was never interested in learning covers, and I never took lessons.” That improvisational spirit shows in his brief, freaky jams with surf-tinged psychedelic guitar and nasally intonations; it’s waves of stringy hair and rattling bones, jittery lyrics like those in “Bad Thing” off his upcoming self-titled release, “when I play my Stratocaster/I feel like an innocent kid/But when I’m looking in the mirror/Remember the bad things I did”

You can hear some of these same freaky-jittery qualities in the heaping mess of acts playing the Boogaloo in SF this week, and for that matter, Burgerama, another like-minded, Burger Records-endorsed fest happening concurrently down south. On top of all the fests, Bohrman and Co. are still producing cassettes (“Cassettes are handy, they’re like little business cards, they’re durable and cheap to make and buy.”) and running a successful little shop.

“It’s been a dream come true, but it’s still so much work. We just keep piling it on for ourselves,” Bohrman sighs. “It’s hard building a legacy.”