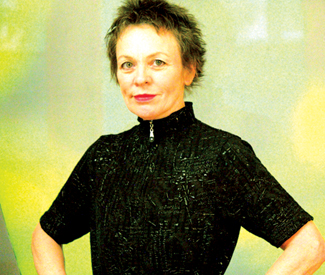 MUSIC When I spoke with art legend-cult hero Laurie Anderson — known for her experimental music involving invented instruments and poetry — her soothing manner caught me off guard. She’s critical, yet positive; accomplished, yet humble. She’s also somewhat of a Zen goddess (although she’d probably dislike that tag).

The lasting impression of her visit to Hope Cottage, a retreat tucked into the pastoral hills of the Green Gulch Farm Zen Center in Marin County, will bring Anderson to the 142 Throckmorton Theater this week for a conversation with San Francisco Zen Center’s senior dharma teacher, Tenshin Reb Anderson. The event directly benefits the restoration of Hope Cottage — a Bay Area refuge that has recently fallen into fiscally prohibitive disrepair.

San Francisco Bay Guardian: What drew you to the Hope Cottage restoration project?

Laurie Anderson: Hope Cottage itself. It’s such a beautiful place. I went there with my dog, and it was sort of an experiment to see if I could learn to communicate with her better. I heard dogs could understand 500 words, and I thought, ‘I wonder if I go to an isolated place and spend a lot of time with her, we can learn to talk?” It was a lot of fun.

SFBG: How did Buddhism become an important part of your life?

LA: I first started doing meditation in the ’70s, and it was just a way to train my mind to not be so crazy. I realized a lot of painful experiences are stored in the body in a coded and interesting way and that when you meditate, you can find those places. I found that really fascinating and helpful.

SFBG: Do you have any advice for people interested in getting into Buddhism? I’ve tried to meditate, but I can’t sit still for long enough.

LA: It’s very difficult to do. Then you realize if you try and break it down into smaller pieces, it becomes a little bit more possible. We live in a culture that’s so obsessively dedicated to getting stuff done. The last time I was out at dinner, I realized, we were all reading our emails! I said, ‘Read [your] last two emails. Let’s see what we’re spending this time doing.’ We did, and they were idiotic. I thought, ‘Whoa, this is what I’m giving up human contact for?’ You have to be really careful about that stuff. It can eat you alive.

SFBG: What have you been up to artistically?

LA: Right now, I’m interested in painting — something I hadn’t done in a very long time. I started just making a lot of music and films. One of the reasons I came back to [painting] is because of scale. It’s really fun to work with physical things that don’t necessarily fit on your computer screen because we pretty much live in a world of screens, and you think, ‘If I’ve seen it there, I really understand it.’ And that’s not true in the world of painting.

SFBG: What made you transition from fine art to performance art in the first place?

LA: I like stories, so I was trying to record things and put them into talking sculpture boxes or something, and I thought, ‘Wait a second. Why don’t I just say them?’ One of the great things about the so-called multimedia artist is that you can do a lot of different kinds of things and no one can say, ‘You’re a painter, you shouldn’t be writing a novel!’ So, it gives you a little more freedom to stay out of your box because, you know, artists just get put into boxes and are supposed to stay in them.

LA: Well, I don’t know that I have because it’s difficult to move from one thing to another. You can try, but here come the art police saying, ‘Stop doing that! Why are you painting? You’re a filmmaker! Where’s your sense of propriety?’ You’d think when you live the life of an artist, you live the life of freedom, but it’s not quite like that.

SFBG: So, what projects do you have in the works?

LA: I’m working on a book of stories, an exhibition of paintings, a new show — a bunch of different things. It’s fun to work on them all at once.

SFBG: And you recently performed a show in Taiwan? How was that?

LA: I can’t say I speak Mandarin at all, but I found it really exciting to work with a translator. You know, English is such a complicated language that you can write one thing and it means five things, so when it’s translated into another language, particularly Mandarin, you have to choose which one of those things you really want to have emphasized.

Spending this last week in Taiwan, I realized how completely different their culture is from ours. But, if you can make a joke in Mandarin and people laugh, then it is sort of one world, you know?<0x00A0><cs:5>2<cs:>

AN EVENING WITH LAURIE ANDERSON AND TENSHIN REB ANDERSON