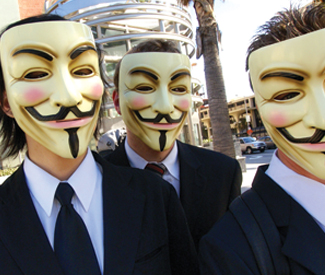 There have always been journalists and activists devoted to safeguarding the free flow of information, but the age of the Internet has brought a new set of opportunities and challenges — and a new generation of loosely affiliated online enforcers collectively known as Anonymous.

This network of so-called “hacktivists” from around the world organize operations ranging from physical protests to cyber attacks on corporate websites, involving anything from small groups carrying out someone’s idea to large groups using downloaded software to launch sophisticated attacks on high-profile villains or in defense of embattled heroes.

“We are Anonymous. We are Legion. We do not forgive. We do not forget. Expect us,” is a common tagline members of the group use in announcing its campaigns, often through YouTube videos and accompanied by imagery of a suit with a question mark for a head or someone wearing the Guy Fawkes mask popularized by the film V for Vendetta, with its theme of the masses rising up against injustice, driven by the power of basic ideas about justice (see “Remember, remember the 5th of November,” 11/1/11).

The idea of the online community rising up in collective action under the banner of Anonymous first appeared around 2003, but it really caught on and went viral in the last few years, first when Anonymous organized global protests outside Church of Scientology offices in 2008 and again at the end of 2010 when Anonymous defended Wikileaks’ release of secret diplomatic cables, shutting down the websites of Visa, Amazon, PayPal, and other companies that cooperated with the U.S. government in trying to freeze Wikileaks’ assets.

Here in San Francisco, Anonymous helped organize and coordinate the waves of protests directed at BART in August 2011 after the agency shut down cell phone service to try to disrupt a protest of the latest fatal shooting by a BART police officer. It was through those protests that some of the earliest organizers of Occupy San Francisco say they met and began working together, and Anonymous has shown strong support for the Occupy movement.

So, for this year’s FOI Issue, we decided to chat up an Anonymous member who is active in the group’s discussions on its Internet Relay Chat (IRC) channels, which are hard to find and prone to being shut down whenever someone fears security has been breached. The following are excerpts from that interview:

SFBG Is there a philosophy behind the work Anonymous does?

ANON You should really ask the hive mind. We are all Anon, not just a single person. But I will answer you. There are a few things that bind all of Anon together: Justice, freedom, personal joy. We just want to live our lives normally and happily, and we believe there is a power stopping us from doing so, so we decided to band together and do something about it.

SFBG We’ve written a lot about Occupy and it’s the same thing: Everyone can only represent themselves.

ANON Occupy is the next step, I believe. But that’s just me. Occupy is the forum where people gather transferred into the real world. It’s just one manifestation of the hive mind in reality. There may be another one in the future.

SFBG How is organizing with Anonymous different from organizing in the real world?

ANON Safer I suppose. Convenience. We are only at the mercy of what’s out there in cyberspace. We aren’t going to be beat down by a cop who has gotten drunk on power. In the real world, it’s dangerous to gather in numbers. It’s come to a point where even a little dissent under the First Amendment can turn you into an “enemy” of a country you love so much.

Anon, we are people. We come together. We feel like doing something, we do it. We separate; it’s not always the same people. There is very, very, very little organization.

SFBG How does Anonymous tend to organize? Are raids the most common form of political protest?

ANON Raids can be and cannot be, depends on your mood. Sometimes it is, sometimes it’s not. I have personal views on raids as a protest. But all I can say to that effect is, it is simply one means of a protest. There is no damage. Just an online sit-in.

SFBG Can you describe how that process works, in which some ideas turn into action and some just remain ideas?

ANON People just agree on it, or talk about which is a good idea and which is a bad one. You see it every day on the IRC channel, for example. The bad ones we disagree on. We all input into one another’s conversation. Even if our idea is wrong and we see truth in another, there is no judgment for being wrong.

SFBG What about people who aren’t great with computers or would have no idea how to find this chatroom. Would they be helpful? Would you want them to get involved?

ANON There are Anons everywhere. They talk to people and show them how to get here. I’ve showed people and others in this room have showed people. And this is just one congregation. There are many. Yes we want more people involved. We want the average Joe to be involved. You don’t need computer skills to be a part of anonymous. Just ideas, or questions. Just wanting to search for the truth of the world.

SFBG Does Anonymous have ideas and faith everyone in the group believes in?

ANON No. There are some ideas, but no faith. Faith, I believe, is really personal. But ideas, yes, we have many. And everyone ideas are important, whether they are brilliant or stupid, because they are another person. I guess respect and appreciation for other people for who they are is something we all agree on.

SFBG Websites targetted for recent raids have included those of the Vatican, AIPAC. How would you describe the pattern or category that most targets fit into?

ANON I guess I could say, corrupt. And there is proof of corruption. We don’t ever move without proof. But other than that, I am not at liberty to say.

SFBG It’s not based on corporate greed or crimes?

ANON I am really not at liberty to say. Anons come from all walks. We attack what we think is wrong, as a collective. It doesn’t always have to be corporate greed. It has to be crime. Personally I don’t care how greedy a company is. But when they do something wrong, I react. I’m sure there are some like minds in Anon, but I can’t speak for everyone.

A good example is back when PayPal, Mastercard, and Visa refused to release funds to Wikileaks. The money belonged to Wikileaks and the middle men would not release it. The money was donated, and they refused to release it…We saw it as wrong. It also hurt the free flow of information, of revealing what’s going on behind closed government doors. Who are they to decide those things should be kept secret? The people want to know and they should know. I suppose this brings us to another of Anon’s ideas that we mostly believe in, transparency.

SFBG Is there anything that should be kept secret?

SFBG What about personal lives of government officials?

ANON Of course that should be kept private. But when it involves the rest of the country, we are at an impasse. If they want certain details kept private, fine by me. But if they want to make back door deals, that is wrong. People should know what the government is doing. The only place where secrecy can be defended that I see at this moment is military defense, but even that can be easily corrupted. So we want to know.

SFBG What about Bradley Manning’s alleged leaks? Those were about the military.

ANON Personally, I think there is a danger. But as a whole, we want to know. Because secrets left in the hands of a few can become corrupt. We should all understand one another.

It sounds like an ideal, but universal brotherhood, why is it so far off a thought? Why can’t we all just understand one another instead of going out and fighting? A lot of wars in the past have had many secrets, many back door dealings, many deaths that could have been avoided. If people just knew everything that happens all the time, if people just knew the truth, wouldn’t we care more?

SFBG Care more about what?

ANON About others. We are human, we laugh, we love, we share joy, we stand by and help people. This type of society is separating us, the Internet unites us. It’s what being a human being is about. We are a whole as a species, not an individual,

SFBG A sense of community is an important part of it?

ANON I don’t know, but I suppose it does hit our need for belonging. It’s just one place we belong. A community is the side effect I think of just coming together and sharing ideas. Not a bad side effect, but a side effect nonetheless

SFBG How does the concept of diversity factor into this? It could be all old white men in Anon and no one would know, but that could still affect what ideas come out.

ANON Well, because personally I am not old or white — as to my gender, I’ll keep that anonymous — and I am a part of it. I share ideas. I couldn’t care less. It’s the ideas that unite me to other Anons. Some ideas do separate me from some, but there is middle ground everywhere. And true news and an open mind, I believe, can help people find middle ground.