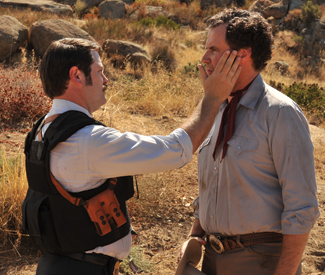 FILM You gotta love a guy who is willing to poke fun at his man handles. But the consistency with which Will Ferrell is willing to drop trou has had even Terry Gross wondering, what’s with the vast expanses of exposed carne asada, dude?

Ferrell’s new Casa de mi Padre — a Spanish-language jab at telenovelas, spaghetti-burrito westerns, and just plain low-budget moviemaking, circa the early 1970s — is no exception. It, er, climaxes with a sweet, sweet love scene, complete with close-ups on rumps.

“Well, that was always in the script — that was literally written in the stage direction: lots of butts. Way too many butts. And that made me laugh, if that was going to be our big crescendo lovemaking scene,” Ferrell says gamely. “Of course, lit beautifully with soft lenses and elegant tracking shots and dissolves.”

Tanned, gold-tressed, and outfitted in a gingham shirt and khakis, the actor resembles the tall, well-groomed human incarnation of a Steiff teddy bear. He also comes off as one of the nicest every-guy movie stars around — the kind that justifies the response you get when you tell someone you’re interviewing Will Ferrell (inevitably: “Omigod, I love him!”)

Maybe that appeal has to do with a willingness to embrace the painfully awkward. Anything to heighten the comedy of the moment, he explains, but also, “I think we’re so body- and image-conscious in this culture, and there’s so much emphasis on staying in shape, looking good, plastic surgery, this, that, and the other, that it’s just kind of my protest against all of that. It’s just, that’s what real bodies look like, and if mine happens to look funny, then that’s good, too.”

The latest challenge in a long line of actorly exercises and comic gestures — from his legendary stint on Saturday Night Live and his Funny or Die videos, to his long list of comedies probing the last gasps of American masculinity, and such serious forays as Stranger Than Fiction (2006) — is Casa de mi Padre. Here Ferrell tackles an almost entirely Spanish script (with only meager high school and college language courses under his belt) alongside Mexican superstars Gael García Bernal and Diego Luna and telenovela veteran Genesis Rodriguez.

The entire project, directed by Matt Piedmont and written by Andrew Steele, sprang from Farrell’s noggin. “I had this idea for the longest time, just from watching telenovelas,” he recounts. “It’s one of those things where you’re cruising around the dial, and you stop, and you watch it for four or five minutes, and it’s like, my god. It’s way over the top, but it was so funny to put myself in that world. I’ve never seen that before and I thought, wow, it would be a unique opportunity to take someone from American comedy and have them commit to speaking Spanish. That could be a cool movie.”

So Ferrell worked with Patrick Pérez, who translated the script from English to Spanish, before the shoot and then during the production, driving to and from the set every day, going over lines and working on pronunciation. “It was a little bit crazy — a lot crazy,” Ferrell confesses. “But it was so much fun. I don’t know if I’ve ever had a more fun yet stressful experience.”

All of which led to almost zero improvisation on the actor’s part; plenty of meta, Machete-like spoofs; and a new twist in the world of Ferrell’s films, which seem to all share a glee at poking holes in American masculinity. Yes, Casa punctures padre-informed transmissions of Latin machismo, but it equally ridicules the idea of a gringo actor riding in and superimposing himself, badly or otherwise, over another country’s culture.

“That theme of the macho Americans, ‘USA! We’re number one!’ has been so fascinating and such a great thing to make fun of. That we think we’re the best,” Ferrell observes. “I’ve always been fascinated with that level of ego.”