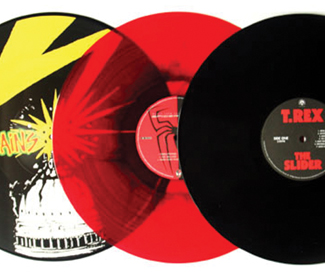 MUSIC In today’s modern music world, when iTunes and MP3s have dominated the mainstream market, and digital distribution is now the norm, a lot of vinyl aficionados wax nostalgic about the thrill of buying a new record, pulling out the disc, checking out the gatefold art, reading the liner notes, and enjoying a multifaceted musical experience.

Although vinyl records obviously never really went away, the quality of releases declined steadily over the years as consumer demand waned and the number of manufacturers around the world dwindled. But that void has been filled by — among other indie labels — local imprint Pirates Press Records. The independent manufacturer and record label has been reissuing Cock Sparrer’s older records; it also released a live LP/DVD, Back In SF, recorded in 2009 at the Pirates Press fifth anniversary party at Great American Music Hall.

Eric Mueller, 31, started Pirates Press in 2004 out of a love for vinyl, after he grew disillusioned with the way he saw another manufacturer he was working for treating their clients and employees.

“I decided to take my business and hard work and put it elsewhere, and did it with people who were of like-minded motivations,” says Mueller in his office in Potrero Hill, surrounded by an array of records and posters that Pirates Press made. He added, “We’re all super big vinyl nerds — it’s fun to make records, and we enjoy collecting the products that we make.”

That mindset, that a record doesn’t have to simply be a medium by which one listens to music, is palpable when browsing through the company’s releases. Brightly colored vinyl, picture discs, and even specially-shaped records — designed locally, and manufactured at a special pressing plant in the Czech Republic — display the label’s rich artistry and imaginative outlook on the industry.

“We’ve developed a lot of new products and technologies — we have proprietary software and hardware that allows us to cut records in a completely unique way from every other manufacturer,” says Mueller.

Another example of the company’s innovation is its current focus on flexis — thin, flexible discs that were popular inserts in magazines and other publications in the past, but have mostly ceased to be made. Thanks to three years worth of work by Pirate Matt Jones, 29, advances in materials and manufacturing have helped Pirates Press make flexis that sound far superior to those of the past — the company is even starting to make paper postcards with grooves that play music.

The label, which pressed nearly 1.75 million records last year, has certainly grown since it began as a bedroom operation, but the initial goals remain the same: try to make the process as easy as possible for all involved — something Mueller proudly stands behind.

Mueller is also proud of the artists that Pirates Press Records is releasing: punk icons such as Cock Sparrer along with up-and-coming local bands.

“It’s like ‘punk rock Robin Hood’ in a sense,” Mueller says. “I can make money pressing records for everybody under the sun, big label, small label — and turn around and take some of our profits and reinvest them into music that everybody in the office stands behind.”