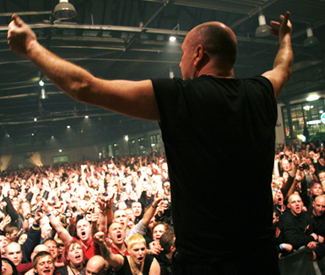 MUSIC While it may not be a household name in the mainstream music world, Cock Sparrer has been one of the most beloved and influential bands in punk rock for four decades and counting.

Hailing from the East End of London, childhood friends Colin McFaull, Mick Beaufoy, Steve Burgess and Steve Bruce — who all remain members of the group today, along with Daryl Smith, who joined in 1992 — formed the band in 1972.

I first encountered Cock Sparrer blasting out of a stereo at a friend’s house in high school during the mid-1990s, and became an immediate fan of its powerful, sing-along anthems propelled by simple, yet infectiously catchy and memorable melodies and hooks. This is all with lyrics that — while written about growing up working class in England — anybody who grew up in a similar environment could relate to regardless of geography.

A few years after I was bitten by the Sparrer bug, it was announced that the band would be coming to the United States to play a few shows, something it had never done before. One of those gigs in 2000 was at the Great American Music Hall in San Francisco, so I made the trek up the coast from Santa Cruz with a big group of friends, and we were not disappointed — it was an amazing experience, a huge sing-along that felt more like a giant party than paid concert.

Two return shows in 2009 in the city delivered the same adrenaline and endorphin rush, as did the one I flew to Las Vegas for last year. Local fans can rejoice again, as Cock Sparrer will be gracing us with its presence at two special 40th anniversary shows at the Warfield, co-headlining with Rancid, which will be marking its 20th year.

“We wanted to celebrate our 40th birthday with some special shows and when the opportunity came up to return to San Francisco, we jumped at the chance,” singer Colin McFaull told me from his home in England. “The city holds a special place in the history of Cock Sparrer and we love playing there.”

McFaull points to the fact that band was born out of a group of friends, and that they all remain close, as one of the main reasons that Cock Sparrer has managed to survive for so long, and outlast many of its punk contemporaries.

“We’ve always maintained that we are mates first and band second. We tend to do things at our pace and on our terms. Someone once described us as ‘the biggest little band you’ve never heard of’ and we like that.”

Forty years ago, when the group first got together, this frame of mind was in place — it informed the naming of the band. “We wanted to have a name that was synonymous with where we came from — it’s just an old East London term of affection and means ‘friend.'”

Despite the fact that Cock Sparrer has influenced generations of streetpunk and Oi bands, and the group plays to sold-out crowds when it does venture out to perform live, all the band members still have regular jobs back at home in England — which McFaull says he is perfectly fine with.

“It would be possible to earn more from the band but that’s not really what we’re about — we’ve never taken ourselves too seriously, there are no egos in Cock Sparrer, we wouldn’t allow it. We don’t believe in putting on rock star airs and graces.”

“We’re the sort of band that you’ll find in the bar of the venues we play chatting to fans and on the odd occasion even buying the beers.”

With Rancid and Factory Minds