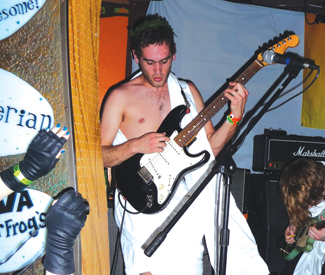 MUSIC On my first foray to Florida, I’d be checking into a hotel in Miami’s South Beach for a night then immediately embarking on the Carnival Imagination for the second annual Bruise Cruise to Nassau, Bahamas.

Over the next three days I’d witness a pole-dancing waiter, seasick garage rockers, and a bachelorette party that could easily be recognized by excitable shouts of “woooo!” Indeed, some of this was expected as part of the cruise culture that had mockingly seeped its way into both my reality and that of about 500 others. Together we’d bear witness to what at heart was a music festival where bands, usually in the cruise-ship lounges, gave their all. Apprehensive at first, I was ready to submit to a bizarre and unlikely voyage.

“I’d hug you, but I just barfed all over myself,” was the first thing Shannon Shaw said to me from the point of take off. Slightly worse for wear from a late night and pre-party performance where she joined Ty Segall in a cover band called the Togas, she and Segall’s drummer Emily Rose Epstein rolled in with instruments and prepared to check in. Later I’d join them for a cafeteria-style lunch and listen rapt during their stories of touring Europe: apparently German prostitutes have turf wars and badass outfits.

The Bay Area presence on the Bruise Cruise was heavy and I was genuinely thrilled to take it all in. Before I could see Thee Oh Sees, but not before a double rainbow mystically appeared during our safety briefing out on deck, the Dirtbombs had the first crack on the Xanadu Lounge’s stage. That’s when it hit me.

The first rough waves became apparent. I joined seemingly unlimited punk-rock paparazzi near the front. The entire audience was swaying, but not necessarily to the music. It was every bit as disorienting as a drug experience. The band ripped through its recognizable hybrid of Detroit rock and soul while a pina colada quelled my nerves.

Thee Oh Sees charged through a 45-minute set in typical electrifying fashion and I caught up with band member Brigid Dawson afterward. She said the camaraderie amongst our local music scene was one of her favorite things about it. “We’re just lucky. We have a lot of great bands right now. There are a lot of us here,” she said.

After confiding to her that I nearly had a panic attack from the vertigo, she recommended fresh ginger or Dramamine. Nonetheless, I was feeling better and it was time to experience what Carnival calls “fine dining.”

This was a more overt example of the Bruisers — if not easily identifiable by their tattoos, then by the fluorescent green wrist bands — co-existing with the normals, aka common cruise ship goers, for a unique mealtime experience. Once you managed to get the meal down (I didn’t hear too much praise for the fare and my fish was rubbery) before you knew it, T-Pain’s “Apple Bottom Jeans” was blaring while the mostly male waitstaff danced suggestively. Right before this, a call and response announcement was made that, “Whatever happens on the ship, stays on the ship!”

Other highlights included the Bruise Cruise Dating Game, followed by Vockah Redu’s request not to label him “sissy bounce” as he got a blow-up doll in a memorable display of athleticism before snagging one of his hair extensions on a stage fixture in a whirlwind of choreography.

Day two left Bruisers to their own vices for relaxation and an opportunity to explore Nassau. Strange Boys’ Philip Sambol, who wears a toga well, and Reigning Sounds’ Lance Wille rounded out the aforementioned cover band performing searing renditions of ’60s psych nuggets. Fanaticism trumps criticism as I thought their set blew Soft Pack’s and Fucked Up’s away. I thoroughly enjoyed listening to the Toga’s versions of “Helter Skelter,” “Teenage Kicks,” “96 Tears, and even a Pleasure Seekers cover, of course sung by Shaw.

By Sunday morning we were back on international waters and the waves were noticeable. Quintron hand delivered non-drowsy anti-nausea medication to a fellow rocker. Meanwhile, Miss Pussycat’s “Puppets and Pancakes Breakfast” was a hit.

I somehow missed Kyp Malone from TV On the Radio’s performance in which he announced Whitney Houston’s death. Shortly after, San Francisco’s Mikal Cronin took the stage and delivered a solid performance with Segall doing double duty on guitar.

Things reached a fever pitch when an open bar was called during Quintron and Miss Pussycat’s energetic set. Then a feather-adorned King Khan & the Shrines followed as the final live act.

In one of the last dance opportunities aboard the ship, Quintron DJ’d a Swamp Stack Dance Party mixing Archie Bell and the Drells’ “Tighten Up” with the infectious Bohannon beat.

Three days on a cruise ship is ridiculous enough, but adding the Bruise Cruise to the mix is insane. You meet people, you make friends, but you’ll be happy to see your next show back on land.