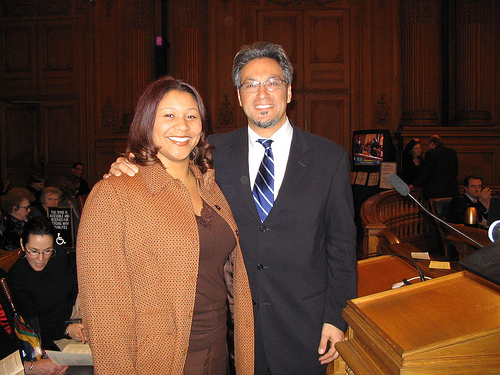 San Francisco’s political lines are in the process of being redrawn. That’s true literally, with the current reconstitution of legislative districts based on the latest census, but it’s also true figuratively: old alliances based on identity and ideology are being replaced with uncertain new political dynamics. And nowhere is that more true than in District 5.

In a recent Guardian, we explored the implications of Sup. Christina Olague’s dual (and potentially dueling) loyalties between Mayor Ed Lee, who appointed her to the job, and the progressive political community with which Olague has long identified. Those seemed to play out yesterday when Olague bucked progressives to be the sixth co-sponsor of Sup. Mark Farrell’s proposed charter amendment to repeal ranked-choice voting for citywide offices.

Already, many of her progressive constituents – even those who have strongly supported her – have been privately grumbling that Olague hasn’t been accessible and expressing doubts about her ability to lead one of the city’s most progressive districts. Olague, who initially returned our calls immediately but said she’d have to get back to us about supporting Farrell’s legislation (I’ll add an update if/when she calls back), adamantly denied that she’s had a slow start.

“We’ve been working with constituents constantly,” she said, rattling off a list of nightly meetings. “I’m in the community all the time, getting coffee with folks…We’re working on multiple issues here.”

Michael O’Connor – who owns The Independent and other businesses and who ran in D5 in 2004 and may run again this year – supports Olague but questions the conventional wisdom that her progressive roots and mayoral support make her a lock for reelection this year.

“Olague is an awesome person and she would be a great supervisor in District 9,” O’Connor said, citing her strong ties to the Mission District and work with the Mission Anti-Displacement Coalition. “But she’s very beatable in D5 because she doesn’t have the deep connections to the community.”

That’s a belief that is shared by others, including London Breed – the executive director of the African American Art & Cultural Center for the last 10 years – who jumped into the race last week and threatened to cut into Olague’s support among Mayor Lee’s supporters.

With Attorney General Kamala Harris and other Lee supporters by her side, Breed cast herself as a more authentic and grassroots representative for the district where she was raised. Or as Harris said, “London understands the challenges and strengths of the district. She is, bar none, the best voice for District 5.”

Left unsaid was the split that her candidacy created among supporters of Lee, whose ascension to Room 200 was engineered largely by former mayor Willie Brown and Chinatown power broker Rose Pak. Brown (along with some of the city’s most influential African American ministers) strongly backed Breed for the D5 appointment, while Pak wanted her ally Malcolm Yeung, although she reportedly got behind Olague in the end.

Breed told us that she was supportive of Olague and that “I’ve been adamant about people giving her a chance and working with her.” But she said that it’s already become “clear that she just doesn’t have what it takes and was probably not going to get there,” based on “the feedback and phone calls I got with the experience people had in meeting her.”

“She’s familiar with planning, but not necessarily with the neighborhood and all its community groups,” Breed said. As for crossing Mayor Lee with her decision to run, Breed told us, “This was a hard decision for me to make because I work with many of these people and have good relationship with him.”

Progressive D5 candidates, such as City College Board President John Rizzo, are waiting to take advantage of votes on which Olague breaks with the progressives to carry water for the mayor. As he told us, “The mayor doesn’t get to make this decision, it’s the voters of this district that will decide.”

Like Breed, Rizzo also emphasized his long ties to the district. “I respect Christina and like Christina, but my connections are very deep,” he said, citing his 26 years of living and working as an environmental activist in the district. “I have a record of going out and taking the initiative and making things happen.”

Thea Selby, president of the Lower Haight Merchants and Neighbors Association, has also been running an active campaign for the D5 job, including highlighting Olague’s split loyalties. “She literally switched camps to help chair the Run Ed Run committee,” she told us. Julian Davis, who ran for D5 supervisor in 2004 and has been rumored to be mulling another run, said that it’s disconcerting just how many elected officials in San Francisco started off with the advantage of being appointed to the office: “It’s not participatory democracy the way we envision it.”

Selby and others will be closely watching how Olague votes this year, and trying to differentiate when those votes are significant (such as being the swing vote to place the challenge to RCV on the ballot) or not (including Olague’s early vote to override Lee’s veto, which fell two votes short of the eight needed). “We need to look and see how she votes on things – and when it matters and when it doesn’t,” Selby said.

Yet already, even before the really big and controversial votes like the upcoming 8 Washington and CPMC projects, Olague is feeling the polar tugs on issues such as bicycling. Many bike advocates are mad that Lee has delayed promised bike lanes on Oak Street and with a rash of tickets that cyclists on the Wiggle have received.

“I’ve long been an advocate of biking, but I know there are issues related to parking in the neighborhood,” Olague told us, straddling the issue. “Parking for some reason is a very controversial issue in the city.”

And where does she come down on the stepped up enforcement of bikes rolling stop signs on the Wiggle? “I want to sit down with the Bike Coalition and see what they think,” Olague said.

Meanwhile, Breed – who is widely considered a political moderate, which could cause her problems winning in D5 – is also trying to position herself as more independent than Olague. “I’m about being progressive,” she told us, citing her recent hiring of a case worker at the AAACC to help young African Americans work through barriers to success. “To me, that’s what being progressive is.”

Breed readily acknowledged her early political support from Brown, who appointed her to the Redevelopment Commission when he was mayor, but said that she would still take a tough stand against Lennar and other developers to ensure the needs of current San Franciscans are being met by new projects.

“I’ve told people, this does not mean you have my support,” Breed said of her political contributors and her support of Lennar’s massive redevelopment of the southeast part of the city. “As my grandmother used to say, all money ain’t good money.”

On Breed’s entrance into the race, Olague told us, “It was expected, so I’m not surprised.” Olague said that she’s begun to set up her election campaign, but that most of her focus has been on getting up to speed at City Hall and in D5: “I’m just trying to focus on the work of the district.”