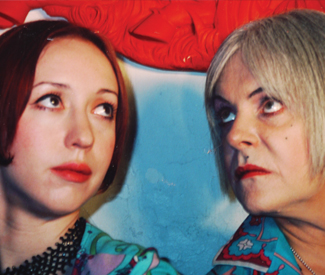 FILM It’s hard to imagine taking on the controversial subject of genre-defying performance artist and musician Genesis Breyer P-Orridge and finding a hitherto-unexploited angle of approach — but Marie Losier’s delicate filmic collage of an artist as an elder pandrogene is full of whimsy and surprise. Losier’s portraits in film of other counter-culture figures, most notably both Mike and George Kuchar, helped shape her into the ideal candidate to tackle filming P-Orridge and her late, great life partner, Lady Jaye Breyer P-Orridge, over the course of several years, documenting their partnership and their pandrogeny project for posterity.

SFBG There’s a whole backstory about how you two met, that you stepped on Gen’s foot at a party, but how did the relationship develop from there?

Marie Losier It was immediate in the sense that I had seen Genesis reading poetry and songs with Thee Majesty [the night before]. I was kind of shy, and I said, “I really loved what you did,” and she looked at me with her big smile and her gold teeth appeared — and I was like, “Wow, that’s beautiful!” And we just spoke shortly but it was very tender and I felt it was very unusual because of the coincidence of timing, and she said, “You can write to me,” and gave me her card, and I emailed her. That was the beginning, for me, of a great adventure. I had no idea about the pandrogeny project except that I was discovering [Genesis and Jaye’s] resemblance and their love, and that’s when I started filming, without knowing that this would become the main subject.

SFBG How much of the film is your footage?

Losier The only archival footage was this tiny minute of William Burroughs, one minute of Gen in Throbbing Gristle, and this really great footage of Coum Transmission where Gen is really young. Then, the archive of [P- Orridge’s children] Genesse and Caresse singing “Are You Experienced?”, and a little tiny image of Jaye performing when she was much younger in New York City.

SFBG That moment when they are in the alley, dressed up in leather, and Gen has the little Hitler mustache?

Losier Sorry, yes, this is footage that Bruce LaBruce gave me. That was interesting because I would not have staged that, but it showed Jaye in a way that I didn’t have.

SFBG One thing that strikes me is that there’s quite a large chunk in the middle in which Jaye does not appear. I wonder if you had originally intended to interview her more about her past and her art? Losier Yes, but Jaye was a lot more shy, or a lot more fleeting in front of the camera, so I spent more time, in a way with Gen. But even if you don’t see her as much in the film, she’s very present. S/he never dies because even to the end she’s still there, and also you feel her in the atmosphere all the time through the film. But it’s true I had less footage of Jaye, and it was only when s/he passed away that I realized I didn’t have enough to make her own full story, but in a way that also made sense. She was very kind but also kind of wild, more secretive than Gen, so it also corresponded to her personality.

SFBG Were you ever intentionally trying to go for a cut-up feeling or technique while you were filming the film, or trying to shape it?

Losier To be totally honest, it’s really the way I edit. If you see my short films, they are all made this way because they are all shot with non-sync sound, 16mm, three-minute rolls of film … so it’s already a collage. I also always mix between the surreal aspect of tableau vivant, and the construction of daily life. I think with Gen and Jaye I found the symbiosis of the perfect cut-up couple to match how I work, and how I build a story.

THE BALLAD OF GENESIS AND LADY JAYE opens Fri/9 in Bay Area theaters.