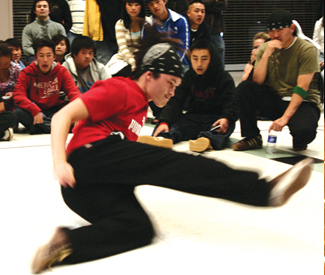 Among B-Boys gives outsiders an hour-long, respectful immersion in the lives of Hmong breakdancers, here “getting lost” in their impressively athletic moves and speaking for themselves, away from the flinty-eyed filter of Gran Torino (2008). In his quest to follow the Velocity/Soul Rivals and Underground Flow crews, Woon takes his camera from Oklahoma to Left Coast exurbia where the kids are attempting to dream with acrobatic handstands, freezes, and crazy-fancy footwork — and finding their efforts rewarded with trophies.

Their triumphs in gritty gyms and community centers are made that much more poignant in the context of their parents’ memories of war, displacement, and poverty. The elders’ stealth contributions to the CIA’s shadowy adventures in Laos casts a pool of lingering darkness on these hip-hoppers, who are striving to carve out a life for themselves while coping with the unique challenges that the Hmong have encountered in the states. As Joua Xiong, the rare B-girl in the Soul Rivals Crew, explains, “Hmong mean ‘the Free,’ and that’s basically what we are: we don’t have a certain country, but we don’t really know our original customs because we’re so mixed up. We have a lot of Thai, Lao, Chinese in us, and we’ve been running away so much from people trying to destroy our customs and make us conform with them.”

Cast away in a semi-rural Merced, Fresno, and Sacto, these kids appear to be finding another kind of freedom. “It’s not just breaking,” says Soul Rivals’ Kyle Vong. “It’s the culture of hip-hop — it’s about teaching yourself to understand life in general and expressing yourself.”

The awkward slackers and damaged hipsters of The Crumbles seem to be worlds away from the humble, proud B-boys of the Central Valley: theirs is a sun-strafed, paved-over Los Angeles habitat of coffee shops, taco trucks, bookstores, budding filmmakers, and living room-bound band practice. Darla (Katie Hipol) is slouching nowhere fast when her zany, charismatic cool-girl chum Elisa (Teresa Michelle Lee) enters the picture, looking for a place to crash.

Elisa’s wacky, erratic, and unreliable, but she’s also capable of generating real excitement — and a mean little keytar hook — and the girls’ band, the Crumbles, gets off the couch and threatens to get all involved to bust out of their shells. Though director Boch never quite dips into the deep background of his characters’ various dysfunctions — the threatened readings of Darla and Elisa’s psychic friend never quite sheds light — the first-time feature filmmaker has a real feel for the drifting, up-for-anything quality of Cali 20-somethings and an appreciation for their highs and lows that makes this familiar, loving, lets-put-on-show-kids update compelling.

With kindred ultraviolence vet Martin Scorsese throwing himself into his own kiddie roller-coaster of a cinematic ride with last year’s Hugo, it makes some sense that Takashi Miike — whose 2010 13 Assassins might have bested both Ichi the Killer (2001) and 1999’s Audition for sheer bloodletting — would enter the children’s field with such gusto. Manga fans will appreciate Miike’s broadly farcical, spoofy élan with comic book touches — down to the freeze-frame mucus drips, the CGI hatched-background stills denoting way-ramped-up action, and fourth-wall-bust-outs/pop-up trivia interludes by your “friendly ninja trivia commentator.”

Rantaro — your archetypal geek toddler, complete with thick glasses and bad haircut — has left the family farm and been sent off to ninja nursery school to learn all about deadly boomeranging stars, big-headed villains with testicular chins, and ninja master-slash-hair stylists. Does Rantaro, er, find himself amid the rigors of class, attacks from dastardly ninja outfits, and a final challenge that has him literally biting the dust? And does it matter when Miike digs in with such glee to lampoon the samurai genre, and kick up dust with the ankle-nibblers in this insanely comical alternate universe of ninja mini-mes?

SFIAAFF Documentary fans, prioritize Give Up Tomorrow, Michael Collins’ probing examination of a high-profile murder case in the Philippines. If the Paradise Lost films got your blood boiling, expect to rage even harder at the unbelievably shifty way the events detailed here unfolded.

As with the West Memphis Three, the crime at Tomorrow‘s heart is horrific: in 1997, two sisters in their early 20s were kidnapped, raped, and murdered. Or were they? Only one body was found, and it was never quite confirmed that the dead woman was actually one of the missing sisters. Of course, that didn’t stop authorities (almost all of whom had ties to a local drug lord, who was also connected to the victims’ family) from fingering a group of local teens, including Paco Larrañaga — who became the case’s main target, despite the fact that dozens of his culinary-school classmates swore he was with them, hundreds of miles from the crime scene, at the time of the alleged murders.

Give Up Tomorrow offers a searing study of a corrupt court system, and the heartbreak that happens when a cause célèbre falls victim to the short attention span of the international activist community. Without spoiling all of its twists and turns, know that this story is better than any fictionalized crime drama, and more powerfully wrenching for being true.

Other docs worth checking out include Mr. Cao Goes to Washington, an insightful look at the American political system via Joseph Cao, who was the first Vietnamese American elected to Congress. But that wasn’t the most unique thing about him: he was a Republican, elected amid post-Katrina disarray in one of New Orleans’ traditionally African American and staunchly Democratic districts. S. Leo Chiang’s film follows Cao as he makes hard choices in the year leading up to his battle for re-election, including voting first for, then against, President Obama’s health care reform bill. (Reason for the switch: he’s passionately anti-abortion.) Even if you don’t agree with his views, Cao puts a human (and surprisingly honest) face on the great divide between the political parties in this country.

More hopeful is No Look Pass, Melissa Johnson’s quite enjoyable documentary about first-generation Burmese American Emily Tay, a basketball superstar who turns pro after graduating Harvard (eat your heart out, Jeremy Lin), and, oh yeah — happens to be a lesbian. No Look Pass also screened at the San Francisco Independent Film Festival, and it’s not hard to see why it appeals to a wide range of audiences: Tay is an inspiring figure on the court, and endearingly awkward off it, especially when trying to relate to her deeply traditional parents.

Even more uplifting, and perfectly compressed at 39 minutes, is Lucy Walker’s Oscar-nominated The Tsunami and the Cherry Blossom, which examines the “beauty and terror” of nature, as perceived by Japanese survivors of the recent earthquake and tsunami — and the spiritual significance of the cherry blossom, which is shown to be a key element in the country’s healing process.

Genre fans! I Am a Ghost, the world-premiere latest from prolific local H.P. Mendoza (2006’s Colma: The Musical), starts slowly but — holy ghost! — stick with it, and you’ll be shriekingly rewarded. And another recent IndieFest selection, Marlon N. Rivera’s satirical The Woman in the Septic Tank, returns to delight another wave of crowds with its tale of three ambitious filmmakers (and a hell of a leading lady) determined to make the most popular Filipino movie of all time. Best line: “Fuck Cannes, bro! We’re talking Oscars!” (Cheryl Eddy)