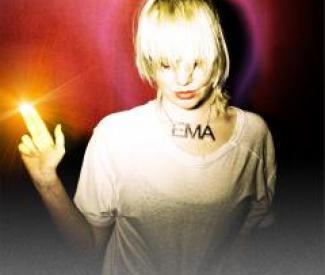 No one likes to be shushed. The most intense shushing I ever endured was at the Independent, during an Owen Pallett show. I was talking to a friend as the lights went down, when the woman standing in front of me turned around, stuck her finger closer to my mouth than hers, and said “shush.” Maybe it was because Pallett is associated with Arcade Fire and plays violin – two things that demand musical respect, right? – but considering that the dude hadn’t even picked up his instrument yet, and we were standing back under the balcony, I thought the least this stranger could do was let a guy finish his thought. That said, I would have preferred all the preempting, anal shushers in the world to the shitheads at the EMA show last night.

The girl to my right, perched on a speaker with her feet on the stage, who kept hitting on guys under the guise of insisting on telling them that what they were about to see, seeing, saw, was “the most amazing thing ever.” Adoration and high praise that did not stop her from constantly asking to borrow camera phones to record videos, until the point that they demanded them back. (“Can I just email myself the video?” ”Uh, sure.” “OK. How do I do that?”).

Nor did it stop this super-fan, who works in advertising (of course) from shouting nonstop requests for “Hearts on Fire,” which EMA’s Erika M. Anderson found as perplexing as I did. “Do you mean ‘Soul on Fire’?” Anderson asked. “No, Hearts on Fire!” “Uh, I don’t know that one.” This, combined with a bro calling out “Reptar! Reptar!*” nonstop, caused Anderson to reply, “I think you guys have the wrong night.” When the brave Popscene cameraman tried to shush (in this case deservedly, right near the front of stage and throughout the whole performance) said bro’s nonstop yammer, his response was, “I’m sorry, man.” [Pause for a beat]. “Except that I’m not.”

Now EMA doesn’t exactly demand respect, and isn’t dainty.** (Quote: “I’m a lady on stage, so I want to spit and burp.”) She does have a violin player, who did open the set with that relatively austere instrument, although here less a classical influence than an experiment in electric noise, like ringing feedback. But considering that so much of her album from last year, Past Life Martyred Saints – an experiment in lo-fi versus hi-fi – involves contrasting quiet, soft moments with loud, harsh ones (particularly on songs “The Grey Ship” and “Marked”) EMA does occasionally seem to suggest that you might want to shut the fuck up. Anderson is originally from South Dakota, and I don’t usually interpret the line “fuck California” in a straightforward, hostile manner, but when she got to it at the end of her set, it was a sentiment I was ready to get behind. No one likes to be shushed, but some people deserve it.

*Reptar was the band that was supposed to open the night, but whose van broke down en route from L.A., leaving the crowd at Popscene stranded with the DJ and likely drinking extra while waiting for something to entertain them on stage.

**I wish you could see her red, “hipster haircut” (compliments of Portland, where “the dream of 2003 is alive”) or her extra large Looney Tunes Taz t-shirt, but camera fail.