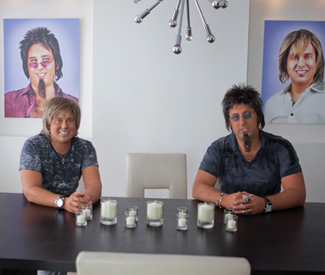 FILM It’s almost impossible to describe Adult Swim hit Tim and Eric Awesome Show, Great Job!, but “cable access on acid” comes pretty close. It’s awkward, gross, repetitive, and quotable; it features unsettling characters portrayed by famous comedians and unknowns who may not actually be actors. Tim Heidecker and Eric Wareheim, who are much more low-key than the amplified versions of themselves they play on the show and in the new Tim and Eric’s Billion Dollar Movie, discussed the spoils of cult fame the morning after a recent screening in San Francisco.

“Seeing the last ten minutes with our hardcore fans — that was the best, because they’re laughing at everything,” Wareheim says. “Versus, we just came from the Sundance Film Festival, and there were good crowds, but there were a lot of people who didn’t know us. It takes awhile to adjust to what we do, like a learning curve.”

Though it opens theatrically this week, Billion Dollar Movie has been available On Demand since the end of January.

“The idea is to get it out to as many people as possible, especially people who won’t be able to see it in theaters, since it’s a limited theatrical release,” Wareheim explains. “But I also think that by getting it out there [early], our fans are talking about it, and they’ll go again in the theater.”

So, how do you transform something comprised of bite-sized insanity into a feature-length film? “Early on, we made a choice not to do a sketch movie, or just make a long episode of the show,” Heidecker says. “We felt that the pacing would never sustain itself. We tried to pace it in a way that the craziness would be there, but it just wouldn’t be coming at you so rapidly. But still, some people are saying that it’s completely exhausting. For us, we feel like we scaled down, but that might not be the reaction of the man on the street.”

And though Billion Dollar Movie contains its share of boundary-pushing gags (literally, you will gag), Heidecker and Wareheim’s humor also springs from their deliberately crappy production values, inspired by commercials, TV outtakes, and promo videos — and necessitated by their own low budget (title notwithstanding). Still, Heidecker sees the movie as a turning point for the pair.

“We’ve been playing with that aesthetic for awhile now, and it is getting a little redundant,” he says. “As in any kind of aesthetic trend, you’re gonna run out of ammunition. I think in a lot of ways, the movie moves past the aesthetic [of the TV show]. We use it in certain places where it’s appropriate, but it wasn’t like, this is all we do. You gotta have other tools in the toolbox.”