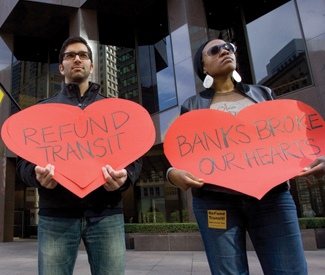 This story has been edited

Bay Area activists, fueled in part by the Occupy movement, have recently taken stands against police brutality, for the rights of the homeless, against the corporate power of banks, and much more. But, arguably, nowhere has the movement been more successful than in the fight against foreclosures and evictions.

With the support of Alliance of Californians for Community Empowerment (ACCE) and the Bayview Foreclosure Fighters, several Bayview residents whose homes had already been sold continue to occupy them, and in some cases sales have been rescinded. Occupy Bernal has used civil disobedience to postpone six housing auctions, keeping their neighbors in their homes that much longer. They secured a meeting with Diana Stauffer, Wells Fargo Home Mortgage senior vice president, and David Campos, District 9 supervisor, to delay foreclosure proceedings.

But the activists are pushing for a full moratorium on foreclosures and evictions in San Francisco. Such a moratorium is not without precedent. In recent years, sheriffs have stopped evictions and foreclosures in Wayne Country, Michigan; Cook County, Illinois; Butler County, Ohio; and Philadelphia County, Pennsylvania.

When Cook County Sheriff John Dart imposed his moratorium in 2010, he said, “I can’t possibly be expected to evict people from their homes when the banks themselves can’t say for sure everything was done properly. I need some kind of assurance that we aren’t evicting families based on fraudulent behavior by the banks.”

San Francisco seems ripe for a similar stance, as Assessor-Recorder Phil Ting recently released a report revealing widespread lawbreaking in foreclosure proceedings. The report found that 84 percent of foreclosures in San Francisco over the last three years involved faulty paperwork, some of it amounting to fraud.

Representatives from the District Attorney’s and the City Attorney’s offices told the Guardian that they are concerned about the report. These bodies may be starting the process of further investigating findings. Last week, Sheriff Ross Mirkarimi, whose office carries out the county’s evictions, said he has begun an initiative to collect and analyze the city’s foreclosure data.

But Mirkarimi’s hands may be tied. As he told Ann Garrison of KPFA radio Feb. 25, “I don’t have the latitude or discretion, much as I would like, because there would need to be a change in state law that empowers municipal sheriffs to be able to use that discretion.”

Occupy Bernal formed just a couple months ago, but it has emerged as a powerful advocate for homeowners facing foreclosure. The neighborhood-based branch of the Occupy movement chose to focus specifically on preventing the evictions of Bernal Heights residents, where over 100 homes face foreclosure.

They kept the pressure up Feb. 25, when a group of supporters convened at 1090 Chestnut Street, the residence of John Stumpf, the CEO of Wells Fargo. That bank owns the majority of mortgages on Bernal homes facing foreclosure.

The protest wasn’t meant to block the street and no one tried to enter the building where Stumpf owns three of the 14 floors. But police decided that the group of about 150 warranted blocking off the entire block to traffic, to the annoyance of many neighbors.

“You collected $43.7 billion in taxpayer money and have since made record profits at the expense of low-income communities, while repeatedly breaking your legal and moral obligations as a creditor. You have failed to comply with loan modification requirements under your own lending agreements,” said a blown-up “foreclosure notice” outside Stumpf’s home.

In the spirited street theater scene, activists dressed as an auctioneer and a larger-than-life John Stumpf played out a fake auction of Stumpf’s property.

Dexter Cato, a father of four whose wife was recently killed in a car crash in the midst of months-long loan modification proceedings, faces foreclosure from his Bayview home of 40 years.

The crowd then proceeded to chant this address: the San Francisco Hall of Jusice and County Jail.

“We understand that some of our customers are going through difficult times during this economic recovery,” said Jim Foley, president of Wells Fargo’s Greater Bay Area region, in a press release responding to the Feb. 25 protest. The company plans to hold “Home Preservation Workshops” in Richmond March 7 and 8 to help homeowners facing foreclosure.

Public officials may be a long way from locking up CEOs for foreclosure fraud, but some have taken notice of complaints against the banks. On Feb. 2, the Berkeley City Council voted not to extend its contract with Wells Fargo to manage $300 million in city assets, citing its foreclosures on city residents.

On a national level, activists have been successful in persuading people to transfer their money to local banks and credit unions in recent months. Javelin Strategy and Research came out with statistics that 5.6 million Americans have switched bank service providers in the past 90 days, three times the normal transfer rate. Bank Transfer Day in early October was specifically cited as the trigger by 610,000 of those people.

The recent $25 billion settlement between the five largest banks and attorneys general in California and other states over mortgage fraud made big headlines, but activists note that it allocates a measly $2,000 to some people who have lost their homes to foreclosure. Occupy Bernal’s Buck Bagot said people need more protection from powerful banks. “Banks suckered people into this stuff, and they have made billions,” Bagot said. “We’re not saying people shouldn’t have to pay off the money they borrowed, but it took two to tango.”