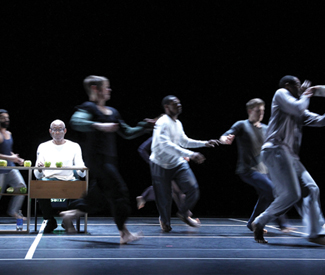 
DANCE This past weekend two master choreographers, each with more than 30 years experience, still managed to surprise us with fresh goods in their dance bags.


Ohad Naharin’s Batsheva Dance Company has a well-deserved reputation for physically lush though highly disciplined choreography. Again presented by San Francisco Performances, Batsheva brought the 2007 Max, whose name may be derived from Naharin’s pseudonym of "Maxin Waratt" as the work’s composer — or simply is an abbreviation of "maximum."


What packed in the audience, which included many dancers, was the Bay Area’s first public opportunity to observe "Gaga" in action. Naharin developed this dance technique in the 1990s while recovering from a back injury. Influenced by yoga and improvisation, this new road to expressive potential has developed an almost cult-like following, in part perhaps because it can only be learned from those accredited for teaching it. At the very least, that is new in contemporary dance.


Max, though fabulously performed by an ensemble of five men and five women, looked only partially successful. Naharin’s coupling of explosive individuality with strict unisons works as well ever. But this piece’s primary satisfaction came from watching individual dancers so clearly listening to themselves and each other, and then translating the resulting sensations into unadorned and spare movement. Even at their most flailing and angular, they proposed stillness and vulnerability. The jerkiness and matter-of-factness in much of the choreography suggested avoidance of transitions, which might be partially responsible for the impressive clarity of Max‘s intent.


The regimentation of Naharin’s unisons, while implying a sense of community, often looked disturbingly forceful. Max had plenty of those. The family portraits made you want to become a hermit. In its more percussive moments, Naharin’s score of chanting, babbling in made-up languages, and falling water sounded too much like strict commands. But it was in its overall trajectory that Max fell short. The emphasis on stasis within the dance itself — despite its vigorous individuality and countdown of accretions in its latter part — did not sufficiently take into account theatrical time.


Early in his career, Bill T. Jones, and his late partner Arnie Zane, pioneered the use of text in dance. At the time, they shocked some, delighted others. Jones has ever since worked to find structural formats with which to employ both of these languages. In his latest endeavor, Story/Time, he has created one of his most delightful pieces yet. In this delicious though quite serious 70-minute entertainment, Jones talks, the dancers dance. Both do it well.


Acknowledging a debt to John Cage, who used a similar format in his 1958 Indeterminacy — stringing together randomly-chosen, one-minute stories — Jones assembled a collection of anecdotes, many of them (no surprise from this artist) autobiographical. Then he and his company developed the choreography that stormed, slithered, and leapt around him as he sat center stage, the fulcrum of the action.


With his massive legs bracing a simple table, Jones looked like one of Michelangelo’s prophets. Employing his beautifully modulated and rich voice to marvelous effect, he carefully controlled the timing with pauses, silences, accelerations, and suspensions. Here, the choreographer was also a first-rate musician.


Jones’ words originated in real-life observations, musings, opportunities for name-dropping, family history, and, perhaps an urban myth or two. Into the core of these often humorous accounts, Jones also placed a dark, dramatic meditation on death. The tales occasionally left the audience hanging with unanswered questions. Some, probably too many, depended on a punch line to make their point.


Story kept viewers on their toes, trying to figure out whether the detailed, chock-full-of-ideas choreography swirled by independently, was engaged in a conversation with Jones’s text, or was acting out a narrative. What was certain: the work got its power from affirming life in all its messiness. It was in the text, the individual dances, the communal lines, and even the double roundelays that opened and closed these well-told tales.