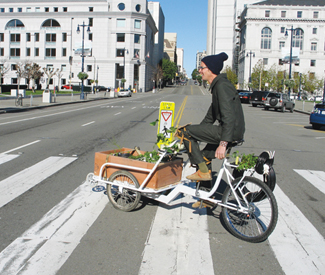 VISUAL ART Artists are makers, though rarely of history. But Fernando García-Dory and Amy Franceschini, two internationally recognized artists, seem to have a gift for it. “Perhaps,” García-Dory says, “when you start with a long perspective on history, you start to make history as well.”

At the David Brower Center’s Hazel Wolf Gallery, their joint show “Land, Use” presents work that is whimsical and futuristic, yet rooted in traditional agricultural values. It’s like Disney’s Tomorrowland — but on an urban farm, where wheelbarrows are pedal-powered. Or on the rolling green pastures of Spain, where sheep wear GPS transmitters around their necks.

Franceschini is one of San Francisco’s own. Her Victory Garden project in 2007 caught the fancy of SF City Hall, with pieces like Trike — a part-cycle, part-wheelbarrow, designed to contain all the supplies necessary to build a small garden. Soon the city began encouraging its residents to grow food, as it did in World War II. City Hall was decked out in raised garden beds, and residents throughout the city began their own vegetable patches.

García-Dory, from Madrid, has worked extensively with the dwindling Basque shepherds of the Pyrenees, where they have lived for centuries. His images and films portray white-haired men stacking golden cheese in ancient caves, or facing the wind, shearing one of their grim-faced flock.

The images come from the Shepherds School he created, and from his World Gathering of Nomadic Peoples (2005), in which shepherds and goatherds around the world came together to talk about their way of life, which has become so rarified in these modern times.

García-Dory’s work, in part, uses new technology to protect mobile pastoralism, as it’s called. His piece Bionic Sheep sits in the foyer of the gallery. The device emits ultrasound waves to repel wolves, as shepherds in Spain are no longer allowed to kill them to protect their flock. It also has a GPS so shepherds can keep track of their flock without being chained to the pasture. “They can stay at the bar, and have another beer,” Dory explains.

Adds Franceschini, “The role of art for us is, in part, utility. It has this negative connotation in the art world, but I think for us it’s important for the work we’re doing to be useful.”

Their first collaboration, Shepherd’s Wagon, a Blueprint, is “like the blueprint for a molecule that was sent on the Voyager shuttle to Jupiter,” says García-Dory. “It’s a way of saying, ‘Here, it’s a model, and it can be reproduced.'”

A canopy reaches out over the gallery, mimicking the awning of a shepherd’s wagon, where they sleep. Wooden chairs and a communal table fold down from the wall. As part of the installation, Franceschini and García-Dory invited young farmers, shepherds, and naturalists to sit together beneath their fragile roof. The forum’s purpose: to discuss how to balance the environmental concerns of naturalists with those of farmers and pastoralists, and forge a new network for social activism.

The gallery still holds some of the collective energy of the group. Remnants of their brainstorm litter the gallery like leaves blown over a sidewalk — a chaos of hopeful thoughts and ideas. Phrases like “We all need to come back to understanding the Farm Bill,” and “Let’s Shadow Each Other Voluntary Exchange Program” hang from the walls.

“Promoting a gathering as we did, it’s a way for us to be close to the people and have the direct communication that very often we lack in our lives,” says García-Dory.

“I haven’t been involved in food politics and land use in the last two years in the Bay Area,” Franceschini says. “For me, it’s a check in. Here’s all the people I’ve met from the Victory Gardens, here’s people I’d like Fernando to meet.”

Although the Bay Area is a hotbed of environmentalism and the slow food movement, awareness of pastoralism is low. “Dory’s reminding us of the history of the Basque sheepherders and the culture that brought shepherding to the American West,” says Brittany Cole Bush of Star Creek Ranch.

In the East Bay hills, Basque and Peruvian shepherds, along with young shepherds like Bush, use sheep and goats to reduce fire hazard, target invasive plants, and encourage native grasses to grow. “These animals are helping to revitalize the lands, and at the same time they’re producing a local grass-fed product that can be taken to market,” explains Bush.

Adds García-Dory, “Maybe sheep are the new celebrity, or should be.”

The Blueprint isn’t finished yet. “The people [at the gathering] said they would like to keep meeting and working, and that was really very encouraging for us,” says García-Dory. “We hope that the heritage of small farmers and shepherds can be a point of anchor for a new movement.”

Such a hope, though ambitious, seems realistic, given their past work. García-Dory’s World Gathering of Nomadic Peoples created an international, politically active community of shepherds that continues to work together. His Shepherds School has graduated 100 people. And Franceschini’s Victory Gardens live on — 10 of the gardens planted from the original 18 still exist. The city of San Francisco, which discovered through the project that people needed to learn how to grow food again, continues to fund educational programs like Hayes Valley Farm.

Although their pieces have created a lasting impact, Franceschini insists that much of that impact is due to the people around her. “An important part of what Fernando and I do is using the community around you to organize and activate ideas. That’s a message I’m always trying to tell my students. Your friends and your closest colleagues are your allies. I think sometimes you don’t see the potential in front of your nose.”

Other pieces on display include Franceschini’s This is Not a Trojan Horse, as well as short films and other artifacts documenting the Victory Garden, Shepherds School, and World Gathering.