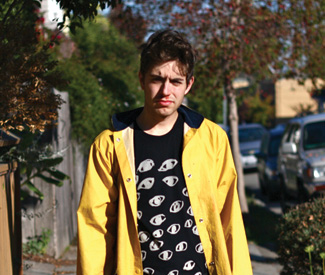 MUSIC Waiting for his coffee at Cafe Divis, Ezra Furman (who performs Sat/11 at Hotel Utah) flips through the latest issue of the Guardian. “I’ve been meaning to do more drugs,” he says, pointing to the cannabis column, Herbwise. The wheels in Furman’s head seem to always be in motion; there’s a constant mischievous look in his eyes. We’ve met here to discuss the most recent product of his overactive imagination — his solo debut, The Year of No Returning, released on Tuesday through Furman’s own Kinetic Family Records.

Making records is by no means unfamiliar territory for this San Francisco-via-Chicago transplant. After Furman’s band Ezra Furman & the Harpoons formed in the dorms of Tufts University in 2006, they released three studio albums and completed several tours throughout the United States and Europe. As the title suggests, however, The Year of No Returning is in many ways a departure for the 25-year-old musician.

Abandoning the comfort of recording live with the band in lieu of endless “tinkering” at Studio Ballistico — which is in a Chicago attic above his old apartment — Furman lovingly assembled these songs piece by piece. “It’s more like a Russian doll,” he explains, “cause you can find the first piece that was there.” Though a guitar remains his primary songwriting instrument, for his solo effort Furman often swapped the Harpoons’ standard rock’n’roll set up for instruments like an upright bass, cello, violin, clarinet, and saxophone.

“Bad Man” features a brooding Furman backed by piano reminiscent of early Tom Waits, and the rollicking chorus on “Sinking Slow” is Beatles-esque. These nods to great songwriters of decades gone by are no coincidence. Some of his first memories are “running around” to the Beatles, and howling along to Warren Zevon’s “Werewolves of London.” Now all grown up, Furman can be heard howling and snarling on the retro power pop track “That’s When It Hit Me.”

Furman began emulating his heroes long before he picked up a guitar. “When I was 10 or 11 I used to just, like, make whole albums,” he says. “I would make [them] up in my head and write on a Microsoft Word document. I knew how they all went and I would go through the lyrics when I was alone with the door closed, and just kind of sing them to myself. They’re all Beatles and Billy Joel rip-offs.”

Although it’s not uncommon to catch glimpses of Bob Dylan or the Violent Femmes’ Gordon Gano in Furman’s songs, he has different tools at his disposal than his predecessors. “I don’t need the Internet / I don’t need TV,” he declares on the sunny album closer “Queen of Hearts,” but in 2009 Furman took full advantage of modern day accessibility for a special project. Each copy of the bootleg Harpoons album Moon Face came with a personalized track for its recipient. “I was just writing so many songs at the time that I didn’t know what to write them about anymore,” he says. “So I asked people what they wanted songs about. And they had some good ideas.”

For Furman, The Year of No Returning isn’t just a title, it’s a way of life. “I’ve been doing a lot of things just ’cause [they] seem risky,” he tells me. “And that just becomes enough reason to do it.” These risks include leaving Chicago behind to make a new home in San Francisco, and taking a solo tour of Europe last November. “[I] was like, I can fucking do this,” he says. “I can just be a force of nature on my own.”

“It gives a feeling, that phrase Year of No Returning, of changing your life,” Furman says. “You know, having a year when you do everything differently. I guess I’ve had a year like that.”

The Year of No Returning is available at www.ezrafurman.com

With Clouds & Mountains, and Debbie Neigher