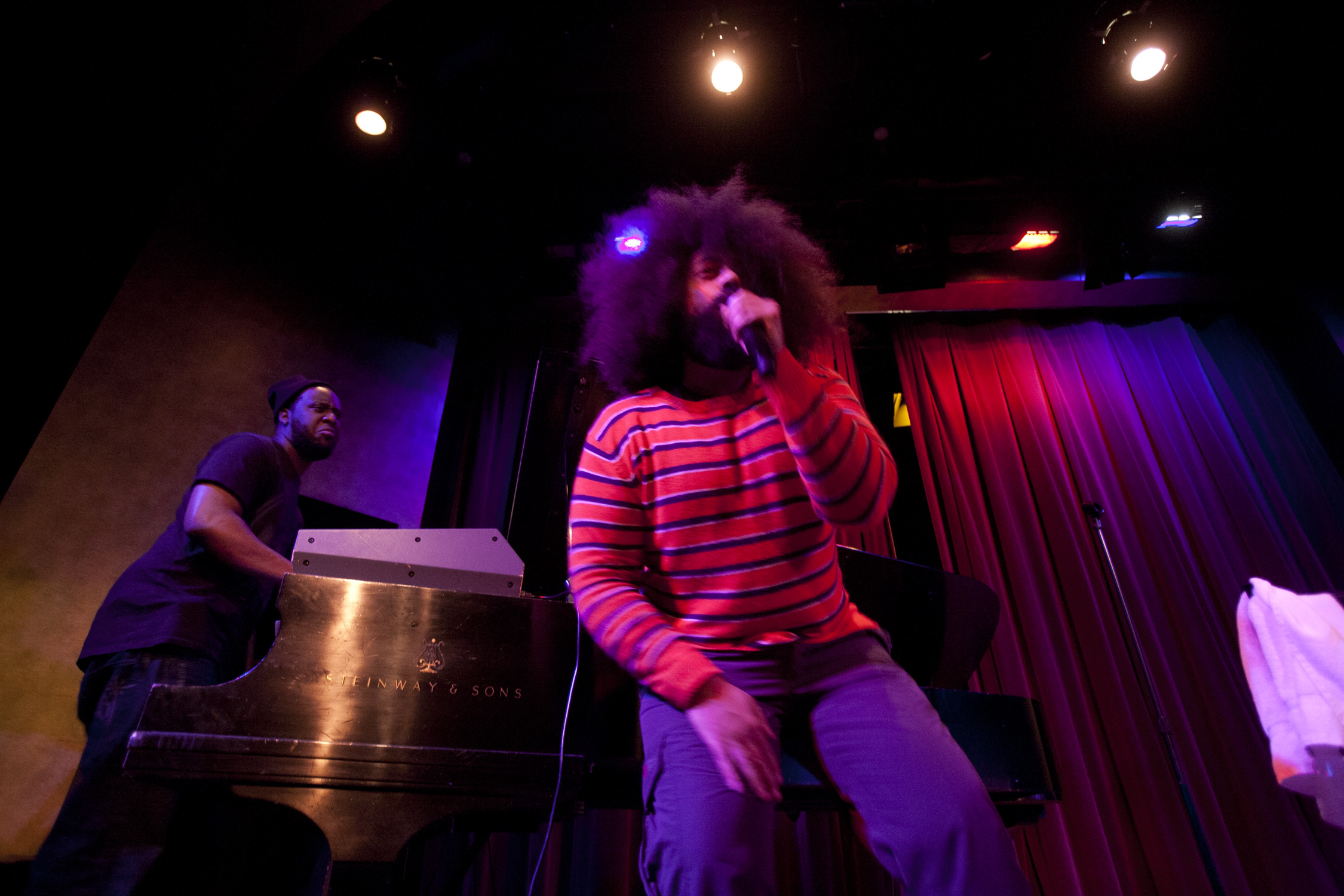 When Reggie Watts first came to my attention, through a series of appearances on Conan O’Brien’s show a few years back, I didn’t know where to place him. My first instinct was to lump him in with the trend in music – particularly indie rock –  around the looping pedal where solo artists including Owen Pallett and tUnE-YaRds could layer mic samples atop one another during a live performance to get a larger, simulated band sound.

In Watts’s case he seemed to be to be combining musical styles including beat boxing to a comedic effect that picked up a tradition that was part Michael Winslow’s SFX, and part Andy Kaufman and Steve Martin’s anti-humor. Still, Watts resists categorization and besides the opportunity for a good pun, SF Sketchfest’s Reggidency, a four night series of shows, was an excellent chance for Bay Area audiences to try and figure out what the hell the performer does.

To get a sense of just how different Watts is from everyone else in comedy, you don’t have to look much further than Garfunkel and Oates, the opening act at his Mezzanine show on Wednesday. Garfunkel and Oates’ Riki Lindhome and Kate Micucci – two banjo and guitar strumming women with an appealing cuteness that screams sitcom – specialize in musical comedy. And they do it well, in songs about bad handjobs, smug pregnant women, and bad/bold booty calls. Each bit from the riotously funny duo had a clear comedic concept and tight musical package.

That same night Reggie Watts played a lot of songs, I’d say a larger proportion even than the first night at Yoshi’s, the “Just the Music” night where – ironically – he got involved in more characters and monologues. But if you asked me what the songs performed at Mezzanine (a Massive Attack themed venue according to Reggie) were about, I honestly couldn’t tell you. Not because I wasn’t paying attention, but because his songs generally aren’t about anything. Sure they involve ideas, concepts, and word play, but it comes in a stream of conscious manner; the songs are less neat little objects as much as platforms for Reggie to riff on whatever he wanted.

A night later, following a deadpan comedic introduction by Reggie that seemingly went over most of the Yoshi’s Oakland crowd Thursday night, jazz pianist Robert Glasper took the stage to open that show alone. Playing a large Steinway piano that dwarfed Watts’s Roland Fantom X7 keyboard, the music initially sounded completely different from what I’d heard from Watts the last two evenings, but as I listened I started to pick up what was going on, Glasper playing a foundation of deep bass notes, a gentle um-un-ah, while going to work over the top of it with playful flourishes. The effect was unique (when Glasper reached a certain intensity someone in the otherwise silent crowd ejaculated “Yes!” rather than exploded in laughter) but the method of improvisation, music or comedic, was the same.

Earlier that day, before the performance, while he was getting ready to drive around Berkeley to find a “Michelin joint” for lunch, Watts told me that he had never worked with Glasper before, and little preparation had been involved for the show. It was of little concern. “I’m not really too worried,“ Watts said. “He’s a jazz guy and has to mix improvisation anyways. He has a totally great ear. I think we’ll come up with something great, it should be fun.” That night Watts emerged on stage dressed in the same red striped sweater from two night before, but with a new gruff voice that was pure jazz man. “I have an original piece I’d like to perform for you tonight. I wrote it in ‘Nawlins in 2004. It’s called ‘Non-Equilibrium’ and it’s about the situation going on…in Kansas.”

During one of their early songs together, Glasper took a break from playing to lean back, place a on hand on the floor and a foot on the rim of the grand, posing for a photographer with an annoying flash. Watts on his own has no problem creating dialogues with alternating voices, but with Glasper he found a willing partner to joke with, whether a fake studio control room exchange, or hollowed between-song banter.

Their first song together, which started out as a gentle “Wind Beneath My Wings”-esque ballad and transformed into some gospel soul, had Watts busting out some of his singing chops. As he held one big cry while modulating the sound by shaking the microphone back and forth, it was clear how talented as a singer he is. (On top of previously being a member of numerous musical projects including the Wayne Horvitz 4 + 1 Ensemble and Maktub, Watts also released a fairly straight forward, funky electronic soul solo album, Simplified, in 2003, entirely distinct from his later comedic album Why Shit So Crazy? in 2010.) No joke, dude has pipes. The actual lyrics, when they are more than just sounds, are essentially cliches – maybe you’ll come back, the things we said – just allusions to a situation and no details. But the song itself sounds full.

“What do you want to do next?” Reggie asked after the song concluded. A dead-pan Glasper responded, “Something that has to do with…there’s a lot of stuff going on all over the world.” “Got it,” Reggie said quickly, starting up a steady bass beat. The track was mellow, but soon Watts was busting out every cheesy, cheap, and tinny pre-programmed effect on his comparatively tiny keyboard. Soon the two got into a karaoke jam session, covering Billy Joel’s “Piano Man” and Bonnie Raitt’s “I Can’t Make You Love Me.”

Watts doesn’t necessarily need accompaniment. This was clear on the last night of the Reggidency, when he was scheduled to improvise an original score for a silent film. In a characteristic screwball move, though, Watts selected not a pre-sound, Silent Era title, but a more modern film with the sound on mute, in this case Ridley Scott’s visually decadent, otherwise vacuous 1985 fantasy film Legend. With an actual silent film there are title cards for the story and the band just has to play the score, with this choice, Reggie was tasked with filling in all of the missing audio, including the introductory narration for the overly long post-Star Wars opening text (which he breathlessly sped up, deflating the gravitas), the original Tangerine Dream score, forest animal sounds, and the actors’ dialogue.

Watts replaced the husky voice of Mia Sara (Ferris Bueller’s girlfriend, Sloane – I don’t know why she wasn’t in that Super Bowl commercial either) with a ditzy whine and dubbed Tom Cruise as an appropriately doltish bumpkin, all while juggling original songs with descriptive lyrics like “the engine of reality is based out of conflict.” The whole thing was a technological and musical feat as much as a comedic one, although at times in part because of the venue’s sound system but also the number of layered elements, the audio was a bit muddled and Reggie’s voice hard to make out.

Even when he’s on a comedic roll, or when the sound is perfect, Watts can be hard to follow. Dana Carvey did a song once called “Chopping Broccoli,” a parody of pretentious musicians and their tendency to sound like they are just making up words to the songs as they go along. Whether he’s building a song atop a beat or doing a character, Watts seems to chop a lot of broccoli on stage, although the content frequently goes in less mundane, more psychedelic directions.

Watts introduced a song at the Mezzanine as “The Hall of Kings” and explicitly said it was about Egyptians taking credit for structures built before them (a topic of interest that he referenced previously as well – a rare instance in which he repeated something during the Reggidency.) When he started singing, however, it’s in a drawl, and the topic is roosters and TV. TV gets transformed into TB, tuberculosis, and soon, in his farmer voice, Reggie was singing about wanting to be next to potatoes.

By the time I figured out what the hell he was going on about, Watts went onto the next thing, musically shifted the quaint shuffle beat into slowed down hip-hop, added some wobble and made it dubstep. In the back of the room, where I seemed to be surrounded by increasingly distracted drunks and some rote club goers not interested in keeping up with the act, I started to feel strained, confused, wondering if I’m still tuned to the right reality. Almost on cue, Watts simplified things, as he hooked up an mp3 player, turned on Phoenix’s “If I Feel Ever Feel Better” and began dancing; it was a hilarious bit of purely physical comedy that was the exact opposite of the heady bit he was doing moments before.

I’d been wondering about the line between the inane and the insightful, and when I spoke to Watts between shows I ask if he’d consider being described as “unintelligible” as a compliment or an insult. “It’s totally complimentary,” Watts responds. “I like to mess around with the ideas, there are certain things you don’t have to hear clearly and sometimes a little concept here or there is nice for suggestion and then you can go on the nonsense trail again.”

It feels like Watts – who seems to have found a perfect niche in performing – is capable of doing anything on stage. For all the characters he does, and the range of subjects and styles he covers, Watts never appears mean, cynical, or harsh. (Someone before the last show on Friday even described him as lovable, a word not typically reserved for comedians.) Sometimes it’s a trick – a sort of cognitive short-circuit – as when he started the Mezzanine show by mouthing words but only audibly saying every third or fourth – but never a joke played at anyone else’s expense. Asked if there was any appeal to simply messing with people, Watts refused: “I don’t like to fuck around with people where I’m taking advantage of them. I want them to join in and try to provide opportunities for them to join in on the conceptualization.”