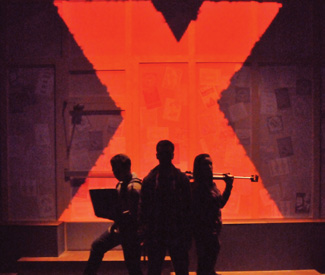 THEATER It’s a rare thing, really too rare, to find an audience eagerly erupting into political discussions between acts of a play. But that’s what Little Brother inspires, and in an unaffected way, without pretension or unwelcome goading. It’s too cool, confident, and contemporary for that. After all, the night I saw the play — adapted by director Josh Costello from the 2008 teen novel by Canadian sci-fi author and activist (and co-editor of Boing Boing) Cory Doctorow — was just one night after Occupy Oakland tried to convert a vacant building into a much-needed community center for the needier of the 99 percent. That didn’t go too well. The street clashes with shock-trooping Oakland police forces led to something like 400 arrests before the night was over.

That latest incident, in an ongoing resistance to systemic and overweening injustice, resonated effortlessly with the proceedings onstage at Custom Made Theatre. There, on an intimate thrust stage, three sharp young actors (Daniel Petzold, Marissa Keltie, and Cory Censoprano) smoothly embodied a fleet series of characters in a story pitting a group of Mission District high school teens against the Department of Homeland Security. The battle takes place in the aftermath of a terrorist attack that levels the Bay Bridge and unleashes an all-out totalitarian crackdown by the federal government. It’s a dramatic, humorous, irreverent, and urgent story all at once. While far from a perfect play (dramatic consistency and verisimilitude are stretched a bit thin by the end), Little Brother is probably the most exciting thing on stage just now, alive like few other productions in its response to the present moment.

While DHS is synonymous with Big Brother throughout, and for good reason — the agency is at the forefront of a total invasion of American private life and the Gitmo’ing of American teens — it can also be understood at times as a synonym for the state at large, from high school vice principals on up. As main character Marcus Yallow (a bright, engaging Petzold) explains in an early address to the audience, he’s a senior at a San Francisco public high school. Even before the Bay Bridge attack, “that makes me one of the most surveilled people in the world.”

Before being transformed into an all-out revolutionary by his violent, extra-constitutional encounter with DHS, Marcus and buddy Darryl (a sharp and versatile Censoprano) are fun-loving rebel hackers and gamers often on the receiving end of unwanted attention by the usual authorities. In an early scene, an inept school administrator interrogates Marcus, believing him, correctly, to be the hacker menace “w1n5t0n” (though, hilariously, pronouncing the handle literally instead of the intended “Winston”). Marcus outwits him, and the administrator loses his grip on the free-roaming online hooligan who, among other things, has handily derailed the “snitch tags” the school plants in library books to track the students.

At this point, Little Brother bears a striking similarity to The North Pool, Rajiv Joseph’s psychological two-hander set in a vice principal’s office after school, which had its premiere last year at Palo Alto’s TheatreWorks. But Joseph’s battle, while resonating with a larger political and historical context, ultimately remains more personal than political. Little Brother moves via the next terrorist attack into the realm of all-out political crisis, as short a distance from here as that may seem, and in this way resists reducing its themes to merely personal terms, highlights a tension with the personal throughout — even as it cleaves to a familiar coming-of-age narrative involving Marcus and girlfriend-coconspirator Ange (played compellingly by Keltie).

Costello shrewdly emphasizes this tension in his staging, which begins with the three principal characters recreating the story for a video cam so that it can be posted online. As Marcus begins a first-person account, his cohorts interrupt him almost immediately. “Dude, you can’t make it all about you,” says Darryl, with good-humored conviction. “It’s too big.”