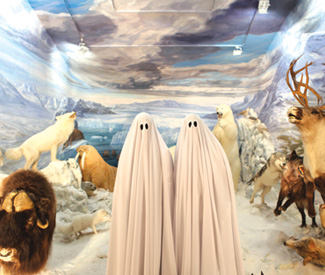 FILM This year’s San Francisco Independent Film Festival kicks off with a film that knows exactly what time it is: 4:44 Last Day on Earth.

Abel Ferrara’s latest imagines what the end of the world might be like for a volatile Lower East Side couple — he’s an ex-junkie (Ferrara favorite Willem Dafoe), she’s a young painter (Shanyn Leigh, Ferrara’s real-life companion). The film’s title refers to the predicted instant that an environmental catastrophe will completely dissolve the ozone layer, but 4:44 is mostly set indoors, specifically within the headspace of Dafoe’s character. It’s a gritty film that veers between self-indulgence and stuff that honestly seems pretty practical (sure, there’s a lot of Skyping, but if the world were ending, wouldn’t you?); as far as inward-looking disaster movies go, anyone planning an apocalypse film festival could double-bill 4:44 nicely with 2011’s Melancholia.

IndieFest is not an apocalypse film festival, per se. You could choose to have a jolly old time; there’s a power ballad sing-along, and even a flick called I Like You. But the selections for sick puppies are truly, truly outstanding this year. Personally, I recommend going as dark as you can possibly stand.

Start your journey with Michael R. Roskam’s Bullhead, a Belgian import that just scored a Best Foreign Language Film Oscar nomination. The five-second description of this film, which is about a cattle farmer who injects both his livestock and his own body with illegal hormones, doesn’t do it justice. Who knew there was such a thing, for instance, as a “hormone mafia underworld”? While some of Bullhead‘s nuances, which occasionally pivot on culture-clash moments specific to its Belgium setting, will inevitably be lost on American viewers, the most important parts of the movie come through loud and clear, and you won’t soon forget them.

Also memorable is Snowtown, another standout Australian crime film on the heels of Animal Kingdom (2010). While Snowtown — whose vérité shooting style recalls Andrea Arnold’s films about desperate living amid Britain’s council estates — isn’t quite as exportable as Animal Kingdom, it is just as uncomfortably tense, and features a teenage protagonist struggling to survive amid close-to-home evil. It’s based on the real-life case of Australia’s worst serial killer, and follows the gruesome facts quite closely. The film has a lot of characters that come and go without much explanation or introduction, which starts to seem deliberate after awhile. Fortunately, the core cast is magnetic. Remember 2005’s Wolf Creek? Snowtown is just as intense.

Still have a lust for blood? Of course you do. British director Ben Wheatley made a splash with 2009 gangster drama Down Terrace; he’s back with much buzz surrounding Kill List, with a review in the IndieFest catalog citing it as “the number one horror film of the year.” I’d hate to hand out that accolade so early in 2012, but this hired-killer-down-the-rabbit-hole tale is indeed worth considering.

Of course, there’s more to horror than guts and torture; if you need a reminder as to why, check out the festival’s pair of home-is-where-the-creepy-is films from Austria, Beside My Brother and Still Life. Beside My Brother‘s set-up — an emotionally disturbed father pretends his twin sons are the same person, and forces them to live as such, a practice they maintain into adulthood — is more promising than its payoff. Remember how in Dead Ringers (1988), the doppelganger bros were gynecologists? Here, they’re painters, and pretty bland ones at that. Far more harrowing is Still Life, about the irrevocable damage wrought by a father’s single, horrible revelation. First-time feature director Sebastian Meise manages to distill the complete crumbling of a seemingly normal-ish family into a slender, wrenching 77 minutes.

Speaking of harrowing, there’s nothing scarier in all of IndieFest than the early scenes of documentary Last Days Here, made by Don Argott and Demian Fenton (directors of 2009’s excellent The Art of the Steal). The film alights upon Bobby Liebling, dubbed the “godfather of doom” for his forty-plus year stint fronting legendary band Pentagram, as a fiftysomething crack addict living in his parents’ basement. Last Days Here is both heartfelt and gloves-off; it’s also blessed with having one of the most unbelievable comeback stories at its core (not a spoiler if you keep abreast of Bay Area concerts; Pentagram’s played here several times in recent years). It, like many of the films discussed here, has a distributor and will be coming around after IndieFest, but I implore you not to sleep on this one — even if you don’t love heavy metal, but especially if you do.

Less successful but no less intriguing is Atlanta oddity Snow On Tha Bluff, which is somewhere between an old-school ethnographic film — like, Robert Flaherty old — and self-aware product of the YouTube generation. The opening and closing scenes are obviously staged, as a drug dealer named Curtis Snow steals a video camera and decides he’ll make an autobiographical movie from the footage he collects. What’s between those bookends is what appears to be an authentic record of life in Snow’s crime-infested neighborhood, complete with drive-by shootings, home invasions, run-ins with the police, copious drug use, etc. Why any of the involved would allow their faces to be shown on camera while, say, firing a non-street legal weapon into a rival’s home is the film’s biggest mystery; its biggest accomplishment is obscuring the obvious lines of demarcation between what’s real and what’s not.

To end your IndieFest experience on a slightly uplifted note, you will have to die — or at least be cool with hanging out with the ghosts in Finisterrae, the first feature from Catalan artist Sergio Caballaro.

Expressing themselves via droll, post-production “dialogue” (in Russian, subtitled in English), the newly-deceased, sheet-wearing duo decides they would like to live again. A-journeying they go, following the wind and encountering an array of strange characters, including enough taxidermied animals to make Chuck Testa‘s head spin. Finisterrae starts slow but builds to glorious, gorgeously filmed and supremely weird heights. Hippies beware.