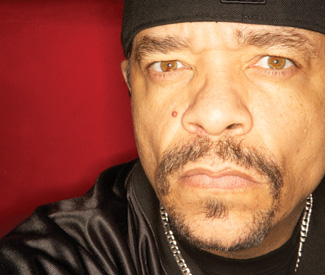 MUSIC From the start, Ice-T was a versatile chameleon, the product of an integrated culture, and a student of the marginalized.

Born in New Jersey, raised in the Crenshaw District of LA, he joined the Crips then pursued the army to pay his bills. His career was blazed in rap, though he once flipped the game to heavy metal. Multifaceted talent that he is, Ice would later grow even more famous on television.

It’s no surprise, then, that he now adds the title of director to his resume, with the debut of his first documentary, Something From Nothing: The Art of Rap, at this year’s Sundance Film Festival. The feature length endeavor is the pioneering artist’s tribute to the culture that bred him, beat him, and made him who he is; it’s a culture he feels is slowly slipping from his grasp. It’s a story as much about the traditions of hip-hop as it is a fervent call to action, told through the eyes of its maker and his impressive posse of friends.

The premise, nevertheless, is simple: this is the story of hip-hop. “It’s a lot of life lessons because you’re not only hearing about rap, but experiences and struggles,” explained Ice during a one-on-one breakfast interview at The Lift in Park City, Utah. He was present for the screenings, along with Grandmaster Caz and Chuck D, both of whom appear in the film.

Other notable feature players include Eminem, Dr. Dre, Kool Moe Dee, Kanye West, Royce da 5’9,” Common, Rakim, KRS-One, Bun B, and Snoop Dogg. “You’re hearing people who you thought woke up successful talk about how they thought about quitting, how they had to find their voice,” Ice said. “I wanted to catch these guys when they were vulnerable, to show they’re real people, and that success doesn’t come without some blows.”

Ice got into rap initially to avoid falling back into gang life, first experimenting with turntables while enlisted in the military. Musically, he made his name as an underground artist before signing with Warner Music/Sire Records, and eventually winning a Grammy for his song, “Back On the Block.” He would follow such success with a branch into acting, currently starring in the primetime series, Law & Order: Special Victims Unit. And while his schedule is more than demanding, he found time between shoots to direct this documentary, a film he believes had to be made to challenge the fallacious imagery of hip-hop in American culture.

“This movie is not about the money or the cars, it’s about the craft,” he says. “The only questions we get asked by the press were, you know, ‘Who are you having sex with?’ ‘How high do you get?’ ‘Who don’t you like?’ They don’t care about your work…I wanted people to see the hip-hop I know, not the hip-hop that’s been given out until now. You’re getting this image that’s not real.”

Something From Nothing begins on the streets of New York, and follows the beat to the sunny coast of Los Angeles. Interviewing the gamut of rap’s finest, Ice catches his friends at the record store, in the studio, on their patio and at the diner. They eat; they smoke; they talk hip-hop. Some, like Kanye, freestyle for the camera; others spit the rhymes they can’t get out of their heads.

In one of the more poignant scenes, Ice speaks with Eminem about his toil to commit to the trade amidst extreme discouragement, and the moment he realized it was his raison d’etre. Equally surreal, the filmmaker travels to Dr. Dre’s lavish estate in the Hollywood Hills, where the two converse about the late, Tupac Shakur.

Because the name ‘Ice-T’ signifies authority, the strength of this film is his access to the inside, exposing tales most people would never have a chance to hear. He hits on every shade of the genre, from gangster rap to native tongue, the poetics of Q-Tip to the in-your-face anarchy of Immortal Technique.

Introducing the film at Sundance, he described his impetus as a dissatisfaction with the current state of hip-hop, and an earnest aim to improve the situation.

Later, he elaborated. “To me, the most pinnacle moment in the movie was when Mos Def quoted Q-Tip saying ‘rap is not pop; rap never had pop ambitions.’ It’s a counterculture. Now it’s become pop, and how you gonna get mad at the kids? They want to eat; they want to make money; they want to live. If you ask me what my dream is, I would love to see a 19 year-old Public Enemy come out of nowhere; I would love to see the new 18 year-old Ice Cube just come kick in the door, and start telling motherfuckers, ‘Fuck the bling, this is what’s good. Let’s talk about Obama, let’s talk about Occupy Wall Street. Let’s go in.'”

He added, “It will never get radio play, but I believe if a young group of kids really nailed it, they could get a movement going. And it’s needed. I took Rage Against the Machine out as my opening act, so of course I want to see that. The terrain is wide open.”

It’s rare to catch Ice-T without his signature shades, and somehow it’s obvious he truly is the OG he claims. Yet his inner sincerity and passion show through in this project, an ode to the first platform to ever give him a voice. He sold the rights to film after the Sundance showings to The Indomina Group for worldwide distribution; a theatrical release is planned for summer.

“Music has that power to give people emotion, and that’s what’s lacking right now,” he reiterated. “They’re not using art form at full power. They’re just rubbing the surface of it.”