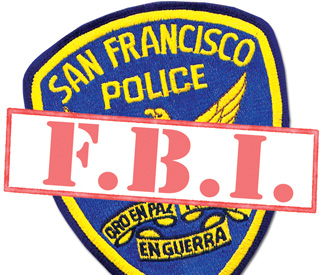 Sup. Jane Kim has introduced legislation to the Board of Supervisors calling for a re-examination of the San Francisco Police Department’s participation in some aspects of the Joint Terrorism Task Force, which was created by the Federal Bureau of Investigations to do domestic surveillance.

The proposed ordinance would prohibit the SFPD from working with the JTTF to collect intelligence on individuals in the absence of criminal wrongdoing, which has been a concern of civil libertarians since last year when a secret memo revealed that local officers were under FBI command and not bound by local and state restrictions on such surveillance (see “Spies in blue,” 4/26/11).

Kim said the ordinance was necessary to ensure the “requirement of reasonable suspicion before we do any type of investigation of criminal activity. And we don’t base it on ethnic identification or religious practice as some of the members of the community have been experiencing the last couple of years.

“Our office is sponsoring this because many members of the Arab, Asian and the Muslim community worship in the district and own many small businesses,” she said.

Critics of the relationship between local and federal law enforcement agencies, facilitated through participation in the JTTF, have long raised concerns about racial profiling and unnecessary spying ordered at the federal level, and carried out by SFPD inspectors assigned full time to the task force.

However, because the SFPD inspectors assigned to the JTTF work under the direction of the FBI, the local regulation and control of law enforcement is effectively limited in JTTF investigations.

“It’s important that a clear prohibition against policing based on race, ethnicity, national origin, or religion applies to all of our officers, all of the time,” said John Crew, police practices expert for the Northern California chapter of the American Civil Liberties Union. The ACLU is one of more than 30 civil rights and community organizations participating in the Coalition for Safe SF, which helped develop the proposed ordinance.

According to the coalition, current rules prevent the SFPD from barring its inspectors assigned to the JTTF from joining FBI agents in collecting intelligence on San Franciscans without any “particular factual predication.”

“The purpose of this legislation is to restore local control, civilian oversight, and transparency over the SFPD’s participation in FBI intelligence-gathering,” stated attorney Nasrina Bargzie of the Asian Law Caucus, which is part of the coalition.

The coalition was a major participant in the San Francisco Human Rights Commission hearing in 2010 on the issue of baseless spying and racial profiling in JTTF investigations. The result was a comprehensive report, endorsed by the Board of Supervisors last spring.

But in 2011, the ACLU and Asian Law Caucus learned that key protections for civil liberties — including civilian oversight of intelligence activity and safeguards to limit intrusive tactics — were thrown out the window and replaced by a secret Memorandum of Understanding with federal law enforcement in 2007.

Under the MOU, SFPD paid officers work out of the local FBI office. The secure nature of their work means they must seek federal permission to even talk to their superiors in the SFPD about their work, effectively removing them from the local chain of command. Despite mandated requirements on local law enforcement, the MOU does not allow for any civilian oversight of the work of officers assigned to the JTTF.

San Francisco Chief of Police Greg Suhr said he believes that the concerns have already been addressed. In his first days in office, Chief Suhr issued a binding Bureau Order #2011-07 setting forth the requirement that officers comply with local standards.

An excerpt of the order reads, “SFPD officers shall work with the JTTF only on investigations of suspected terrorism that have a criminal nexus. In situations where the statutory law of California is more restrictive of law enforcement than comparable federal law, the investigative methods employed by SFPD officers working on JTTF investigations shall conform to the requirements of such California statutes.”

“With this Bureau Order, the language of the 2007 Memorandum of Understanding no longer applies and SFPD personnel are bound by the provisions of the 2011 Order,” SFPD Public Information Officer Albie Esparza told the Guardian.

But Crew said that as long as the MOU between the SFPD and federal law enforcement remains in place, Suhr’s order at best creates contradictory policy. “The Memorandum of Understanding is a binding legal contact with the federal government. Which do you think will take legal precedence when it comes up against a local police chief’s departmental order?” said Crew, who urged the department to clarify the matter by withdrawing from the MOU, a step the SFPD has thus far been unwilling to take.

A letter from Sept. 28 of last year to Coalition for Safe SF from FBI Special Agent Stephanie Douglas regarding the contradiction clarifies the matter. “I do retain the right to assign FBI JTTF cases,” states Douglas, who goes on to assert it is she who makes the confidential judgment of which cases fall afoul of the state and city rules and which do not.

After years of intelligence-gathering authorized under a secret memorandum, public mistrust in the SFPD’s relationship to federal law enforcement persists. Kim says she believes the proposed ordinance will still help make San Francisco safer. “It increases the trust of the community members that are working with public safety in reporting, and in cooperating around many of the actual criminal activities that might be going on in the city,” she said.

The proposed legislative approach of regulating the scope of local participation in federal JTTF work is not unprecedented. The city has the option of terminating the MOU with 30 days notice, a step that the city of Portland, Oregon has taken to prevent its police force from spying on citizens in violation of local and state law.

In December, the city of Berkeley suspended its agreement with the Northern California Regional Intelligence Center (an arm of the Joint Terrorism Task Force) as part of a broad review of that city’s relationship to other local and federal law enforcement agencies (see “Policing the police,” 12/13/11).

Kim was joined by Sups. David Compos and John Avalos in sponsoring the ordinance. Supervisors are expected to vote on the whether to adopt the ordinance this spring after the measure is heard by the city’s Public Safety Committee following the normal 30-day hold. The measure seems to have the support it needs to pass the Board of Supervisors, but it remains unclear whether Mayor Ed Lee, who did not answer our inquiries, will sign it.