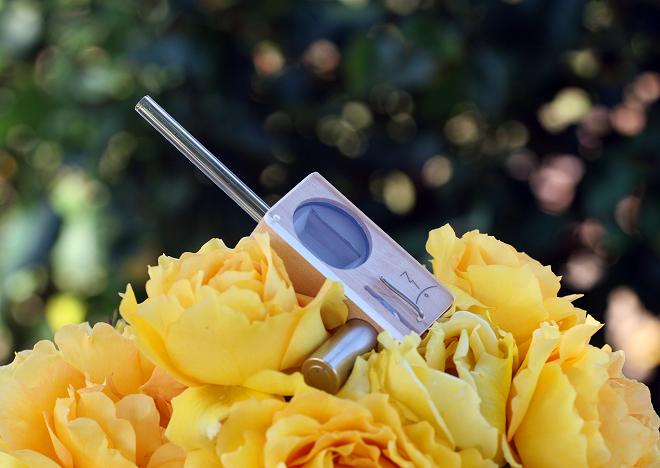 HERBWISE I am not given overmuch to squealing over technology, particularly weed technology. Over the past few months I have sampled candy cane-flavored rolling papers, a cannabis aphrodisiac shot, the Ziggy Marley-endorsed Marijuana Man comic book.

Mind you, I’m not complaining. But –- minus perhaps Humboldt Hemp Wicks –- none of those products have found their way into my everyday retinue. Until, that is, the subject of last week’s Herbwise, Randy Thompson of the vaporizer website Puff it Up, introduced me to a singular machine.

The Magic-Flight Launch Box is a thing of beauty. A clean maple wood box barely larger than a matchbox, it makes the black plastic tabletop models I once associated with vaporizing look clunky, wasteful. Vaporizing, university studies show, cuts down on the lung-coating tar that results from pipes and joints. Plus, it imparts a much cleaner marijuana taste –- perfect for the scores of cannabis connoisseurs who are popping up across the Bay Area.

Operating the Launch Box is simple. Insert the glass mouthpiece into the small round hole, a battery (two lithium batt’s and a recharger come with the starter kit) into the large round hole, press down for about five seconds, and inhale. No wall jack, no noise, no black plastic. The back of the box is engraved with a manifesto on what love is.

Obviously, hippies made it. Namely, a one Forrest Landry, who in a recent phone interview with the Guardian explained that the Launch Box’s ingenious design is a reflection of a New Age philosophy he’s cultivated over decades.

He says the internationality of the product extends to the mindset of the company’s staff, who convene in a workshop located just outside San Diego. “Working with these tools is a kind of meditation. Doing this kind of work allows for an expanded awareness. You’re not aware just of how the tool is cutting the wood.”

Once an East Coast software developer, Landry changed careers upon his migration to California (to follow a lady love, he tells me). “I was thinking about what community of folks I want in my life.”

The answer was cannabis folks –- or more accurately, herbal folks, since the Launch Box can be used to ingest other plants like St. John’s wort (a useful tool for fighting seasonal affective disorder) and tobacco. Magic-Flight plans to start selling its own herbal blends in the next few months that can be vaporized solo or with cannabis.

The last thing that Landry wants is for Magic-Flight to be considered an activist company –- but that’s not to say that there’s nothing the federal government can learn from his philosophy.

“We’re not trying to shift the laws or policies per se, but we’re promoting the idea that love is enabling choice. We’re hoping the government realizes that enabling choice is a good thing.”