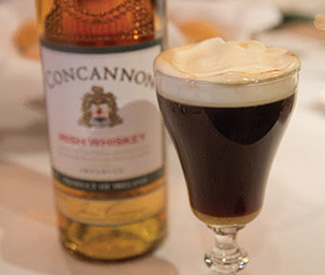 APPETITE An Irish whiskey with a Bay Area connection… Livermore, to be exact? It’s true. January saw the release of a brand new whiskey, not a common occurrence in Ireland. What better way to initiate this new release than with a Bon Vivants party?

My recent travels through Ireland, particularly exploring whiskey production in County Cork (from pot still beauties like Redbreast to mass production Jameson), amplified my love for the smooth pleasures of Irish whiskey.

Cocktail and event gurus the Bon Vivants (www.facebook.com/thebonvivants), a.k.a. Josh Harris and Scott Baird, throw some of the most memorable parties I’ve ever been to. The Concannon Fighting Irish party was no exception. Think unmarked Mission warehouse, rousing traditional Irish band, and two boxers pounding it out in a clandestine brawl for multiple rounds. (Yes, there was blood).

Meanwhile, pours of Concannon (www.concannonvineyard.com) — the name means “wisdom without compromise” — flowed neat over hand-chipped ice, in Irish Coffees or punch. Filling up on corned beef sandwiches, we were a happy lot, transported to another time and place: boxing matches of decades ago.

What about the whiskey? It’s as smooth and supple as you’d expect an Irish whiskey to be, but not because it’s thrice distilled, like a number of popular Irish whiskeys. Concannon is actually twice distilled at Ireland’s Cooley Distillery (www.cooleywhiskey.com) by master blender Noel Sweeney, who blends all Cooley whiskeys. I appreciate minimal distillations, since it simply means more of the original flavors are left in the spirit rather than stripped out of it.

Made from locally harvested spring barley and blended with French corn distilled in a column still (again, unusual for Irish whiskey), the whiskey is distilled in copper pot stills, then aged a minimum of four years in Heaven Hill bourbon casks.

After a rousing release party, I spent the next day in Livermore at Concannon Vineyards as part of a press tour, lingering over Irish breakfast and Irish Coffees, made with Concannnon whiskey, naturally. We were joined by the winery’s fourth generation vintner, John Concannon, and Cooley’s global brand ambassador, John Cashman.

John Concannon regaled us with stories of the Concannon family’s immigration from Ireland to California, the winery’s history dating back to the 1800s, and how it survived Prohibition by being one of the only wineries designated to make altar wine… yes, religion kept them alive. The unexpectedly swank but relaxed atmosphere at the winery is well worth visiting, which includes a tasting room, restaurant, and wine bar pouring more than 50 wines by the glass.

Concannon whiskey is an obvious step above other Irish whiskeys in this price range. Smooth and affordable ($24.99 a bottle), caramel and vanilla notes from bourbon barrels hit the nose. To taste, there are apples, gentle spice, and golden raisins with a silky, oak finish. And that Bay Area connection creates an immediate bond.