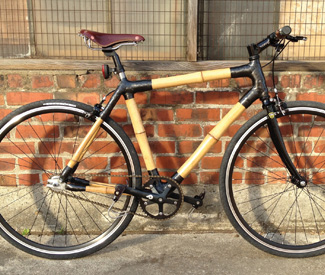 DIY has long been an integral part of San Franciscan culture. Underground music venues, art cars, pop-up food trucks — San Franciscans have been crafting their own good times for years. And while the concept of creating and customizing your own bike isn’t new, a bike studio in the Tenderloin is putting a lightweight, environmentally-friendly spin on it.

Bamboo Bike Studio, started in 2009 by three Brooklyn-based bike obsessives, gives patrons the opportunity to build a safe, quality, visually-striking bike from the ground up by attending one of its weekend workshops. (Kits start at $459.) The shop uses bamboo — a plentiful, regenerative material — harvested from the Yucatan Peninsula.

While the concept of creating a bike from scratch may seem like a tall order, the friendly, committed staff makes the bike-building fun and fascinating. (For those without a lot of time to tinker, the studio also offers a steel frame option that only takes about four to six hours to complete.)

Worries about the legitimacy, safety, and durability of bamboo bikes can be assuaged by a quick test-drive and conversation with someone who has either built one or ridden one. The bikes come in a variety of different sizes and with a variety of fixtures and are exceptionally smooth and strong. They are also pretty light and easy to take care of, perfect for commuters. And if you ever have a problem with your bike, you can always drop into the studio and get it fixed.

“It was intimidating for me before I built them,” says BBS co-founder Justin Aguinaldo, a Mendocino County native who originally opened the shop in Brooklyn, but moved it here in 2009. “I can understand that. But actually, we are specifically looking to help people who are not already experienced builders because the empowerment from building your own things so exceeds the part of being afraid. It’s something that everyone can enjoy and benefit from, which is what we build our program around.

Aguinaldo, a longtime bike messenger, never seems far from two wheels. “I ride a bamboo bike mostly because it’s incredibly comfortable. I use other bikes, but I mostly ride bamboo. I don’t use it for racing or working, but just day-to-day and functionality-wise, it’s really enjoyable and reliable.”

When you walk into the Tenderloin BBS studio, it’s clear that the DIY ethos is as integral to the shop as the bikes themselves. From the homemade tool racks to the not-yet-completed shop sign that is being worked on by an employee, nearly everything (save for the foosball table) was built by the studio workers from scratch. As someone who struggles to tie their own shoes, just being in the place was inspiring, and the process of building my own bike was, well, enlightening.

“DIY has always really appealed to me,” studio worker Erik Castillo said. “You don’t have to go get a fancy bike and pay for the brand. You can get just as good a bike here — whether it’s the steel frame ones or the bamboo ones. The actual bamboo bike is just one of our ships that we use to get where we’re going.”

That’s what’s really interesting about the studio — that its goal is not even necessarily to get you on their bamboo wheels, but to spread bike culture in general. In 2010, the founding members of the studio even traveled to Ghana to help open up a bamboo bike factory to serve those who couldn’t afford expensive rides.

The shop is also committed to integrating into the Tenderloin, and building a inspiring, positive haven in a community that is short on such places. Spend a half an hour in the unpretentious studio, and you’re liable to meet a cast of characters including bike messengers, regular citizens working on their bikes, and Tenderloin neighbors.

“It’s not closed off to anyone,” Castillo explained. “It’s totally open to everyone. If you need help, we are here for you. But if you want to just hang out, you can do that too. Everyone is welcome.”

“If just owning a bamboo bike was the end goal, we’d just build them for you,” Aguinaldo told me. “For us, it’s about empowering more people and providing people with the value of creating your own thing. The bike isn’t the end goal. It’s about building it, riding it, learning from it — seeing how it affects everything else in life.” *