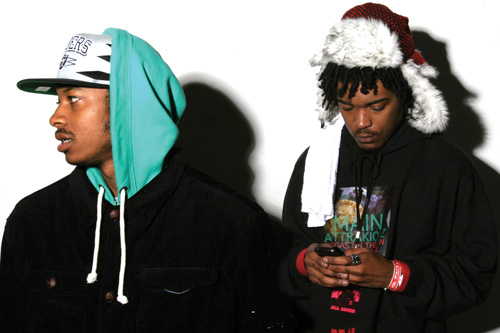 Why is Oakland’s Main Attrakionz (www.mainattrakionz.com) on the rise? It’s because everybody’s talking about it, and with good reason. Last year’s massive 808s & Dark Grapes II mixtape wowed the underground hip-hop world, and with every passing month the act — rapper-producer Squadda B and rapper Mondre M.A.N. — catches the attention of yet another publication, and yet another rising producer — there have been collaborations with A$AP Rocky, Clams Casino, Kool A.D. of Das Racist and Danny Brown, among others.

The cloud-rap duo got a write-up on the Guardian’s Noise blog in December in which writer Frances Capell effused, “Main Attrakionz is carving out its own place in hip-hop by pioneering a new sub-genre” and later, “a refreshing realness runs throughout Main Attrakionz’s lyrics.” In 2012 there will be solo mixtapes from both rappers, along with the collaborative effort Bossalini’s & Fooliyones. With all this skill and regard it’s easy to forget how young the crew really is, it got its start in high school — way back in 2007.

Description of sound: Really can’t describe it. All of our music sounds different.

What do you like most about the Bay Area music scene: The fact that only we know what they talking about.

What piece of music means the most to you and why: The beat to “Da Art of Storytellin” by Outkast featuring Slick Rick, produced by Mr. DJ. It just reminds me of my childhood staying up to watch Rap City countdown and the song was usually number one. Whenever I hear the beat, I think of the puppets in the video.

Who would you most like to tour with: Lil Wayne; as far as performances go, he’s gotta be the top rapper who been performing 10+ years. I wanna learn how he stays ready and energetic for all these years.