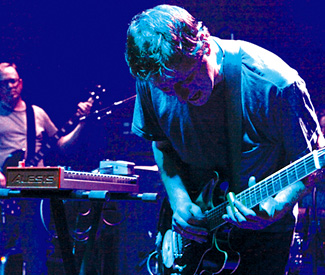 MUSIC “I don’t know if you’ve ever been in a geodesic dome,” says drummer-guitarist Andy Duvall, formerly of Zen Guerilla, and currently one third of the improvisational space rock outfit Carlton Melton. “But if you stand right in the middle, there’s a sweet spot.”

Carlton Melton records all its stripped down, lo-fi material in a dome house located a few hours north of here, though the three mainstays — Duvall, Rich Millman, and Clint Golden — call Oakland and San Francisco home. As for their process: “We just go up, hang out, and record all weekend. It’s very sloppy in many ways but I’ve always been a fan of slop. I think perfection can be a little boring.”

During recording other musician pals drop in and out. Live, the trio switches up the instrumentation mid-set. Duvall, a gifted, frenetic drummer influenced by Colm Ó Cíosóig of My Bloody Valentine among others (“[He’s] completely overlooked when people talk of their brilliance”), added guitar to his repertoire for Carlton Melton. The band will again show its live prowess locally this Saturday at El Rio.

In the few years since the vocal-less act formed in 2008 — I use “formed” tentatively, as it was more of a natural progression than the word implies — it’s released a cluster of DIY material on indie labels and its own, Mid-To-Late Records. There was the initial, 2008 “Live in Point Arena” CD-R, an Empty Shapes split LP, another split with Qumran Orphics and a few seven-inches on SF’s Valley King Records and the Irish Trensmat Records (which specializes in “transmitting drone, noise, oscillations and grooves”), both in 2011. In 2012 they’ll put out yet another long-player (already recorded), likely in spring, and are currently hammering out the details for a European tour.

Last year also saw the release of the swirling, spacey Country Ways LP, a record that begins with the 20-minute titular track, a slow-building stunner of dangling drums and psychedelic guitar with the irregular cosmic zap. A track that seemingly has no beginning or end, with the foggy vortex of pleasing chords hanging on for eternity, it’s trance-like, sensory, afferent. And something clicks when you remember they made this sound while cracking beers amongst friends over a few days in a specially-shaped structure.

The band actually came to be because of the dome. After Zen Guerrilla — a band that, should be noted, amassed many local fans and was a 2001 GOLDIES winner — split up in 2003, Millman was busy raising his two kids. Duvall was happily spending time with his girlfriend and their two cats, Gerard and Cheval. In 2008, Millman called Duvall, and asked if he’d want to start playing again. He agreed but it was mostly to jam with an old friend, the opposite of a definition band. The two, now both 44, who first began creating music together in 1990 when they lived in Delaware, talked to the owner of the dome and said “hey, we’re going to come up and bring some amps and make a bunch of noise at your place, do you mind?”

Back to that sweet spot — it naturally enriches sound. “If you’re talking, your voice just instantly amplifies. Same thing happens with music, you’re playing guitar and it’s just swirling around in the dome. It’s sort of ideal for psychedelic music.” says Duvall in a phonecall from his home in Oakland.

That first night up north was magic. They realized they needed name. Duvall, with all his genial charm recalls the conversation then whispers “Carlton Melton.” Melton was a cool guy he knew from junior high in Delaware, a real bad-ass. Strangely, Millman, who went to another school, also knew Melton in Delaware — they’d played one another in football. Years later, Duvall and Melton happen to meet another dude named Carlton Melton, and that last bit of coincidence seems to have sealed the name’s fate. “It’s bizarre but it really fits the band. I just hope the guy from Delaware’s not offended, because we named the band after him for all the right reasons.”

With Feral Ohms, and Glitter Wizard