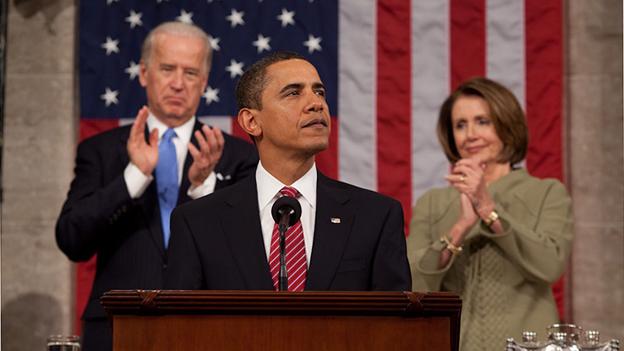 President Barack Obama has a choice for how he uses his State of the Union speech this evening. He could follow the advice of Blue Dog Democrats like Mark Penn, who wrote in The Hill today that Obama should avoid “rhetoric that could be interpreted as class warfare.” Or he can find his inner populist and give the speech that the 99 percent needs to hear by announcing that the rich and the Right have already declared that war, and now he intends to win it on behalf of the people.

I’m rooting for the latter, but fearful that Obama is no William Jennings Bryant – or either of the Presidents Roosevelt – and that he is just not up for seizing this moment and going to war with the powerful plutocrats who are ruining this country.

But there are signs that Obama is at least prepared to “double down on taxing the rich,” as the Christian Science Monitor put it today. Certainly, all signs indicate that he will at least raise the economic inequity issue again tonight, and it’s a positive sign that the invited audience will include Debbie Bosanek, the secretary to billionaire investor Warren Buffet that he famously complained shouldn’t be paying his same tax rate. Certainly, Obama intends to push for his “Buffet rule” that would tax investment returns as income rather than at lower capital gains rates.

But those sorts of reasonable arguments aren’t enough. Obama has been calling for higher taxes on the rich throughout his presidency, albeit never as forcefully as he did on the presidential campaign trail in 2008. And since then, he’s repeatedly betrayed that pledge in cutting deals with Republicans in Congress, exacerbating historically high concentrations of wealth and betraying his own stated principles.

The Occupy movement and most of the left – and even segments of the Tea Party right that complain about the economic elites – no longer trust Obama and the Democrats to fight for the interests of the commoner. We’ve become cynical about putting any hopes in a president poised to shatter campaign fundraising records this year.

Yet as Obama prepares to run for reelection against either a vulture capitalist or hypocritical moralist – both of whom will be openly shilling for the 1 percent – he should realize that it’s both good policy and good politics to capitalize on the opportunity that the Occupy movement has opened up, join the class war, and help us finally win it and seize the resources we need to deal with this country’s myriad problems.

Today’s Chronicle includes a front page story about Rep. Nancy Pelosi’s hopes that Democrats will pick up the 25 seats needed to retake the House of Representatives this year – along with analysts poo-pooing that possibility. The only hope they offered for Pelosi’s plan is a meltdown by the Republican presidential nominee.

But that sort of clear contrast between Democrats and Republicans won’t simply happen on its own, it is something that Obama and the Democrats will need to force by finally relying more on populist ire than using campaign contributions from the wealthy to tarnish their opponents. Simply winning the presidential election won’t help Obama break this country’s political gridlock, he needs to make this race about the undue power of the rich and the Right and win it on those terms.

Pelosi acknowledged that her best hopes for gaining a substantial number of Congressional seats are in California, but they don’t seem to realize that the real potential here is with changing the political dialogue and tapping the 58 percent of California voters who said in a November Field Poll that they agree with the economic critiques that sparked the Occupy movement (and even higher percentages have supported taxing millionaires). Even those who didn’t join the Occupy movement agree with its basic analysis that the few are exploiting the many.

There is a simmering populist discontent that will play out in unpredictable ways this year. And it’s possible that many of the left will never trust Obama until his deeds finally match his words. But there is no larger mainstream political podium in this country than the State of the Union speech, and if Obama misses this opportunity to declare his allegiance with the 99 percent – and his willingness to fight for us – then we may all just be in for the nastiest yet most meaningless presidential election in modern history.