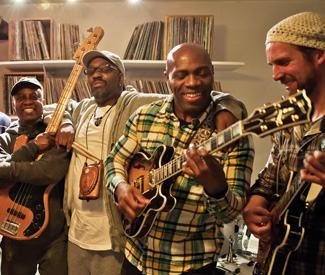 “The music was written by Fela, so if you were good enough, you could add to it, and he wouldn’t say anything. But if you were not good enough, he’d say, ‘This is the line,'” explains Odukogbe, 49, by phone from Berkeley where he now lives. “Afrobeat is a written music — you can’t add to it. You can add if you know your instrument, and it’s sweet enough, then you can go there.”

Fortunately the Lagos, Nigeria, native — who as a child was inspired enough by Fela’s hits to take a wood plank, hammer a nail into it, and pretend it was a guitar — was good enough to take his liberties on guitar on legendary Fela albums like Teacher Don’t Teach Me Nonsense, Beasts of No Nation, and Underground System (all Barclay; 1986, 1989, and 1992). “[Fela] was anxious to meet me [after he got out of prison], and when he saw me, he was so happy — he said, ‘I have a guitar player that’s really good!,'” recalls Odukogbe, who joined Fela’s band in ’85. “One day I said, ‘Fela, I want to take a guitar solo. He only allowed horn and keyboard solos, and he said, ‘Yeah, go ahead,’ and I blew his mind. He was so proud of me.” Odukogbe appears with kindred Fela player Baba Ken Okulolo at a “Fela Kuti Extravaganza” dance party at Cafe Du Nord Jan. 28.

The guitarist played with Fela for five years before deciding to take his chances in the U.S. where a so-called world music movement was catching fire with the success of Nigerian juju master King Sunny Adé, Le Mystere des Voix Bulgares (Nonesuch, 1987), and Brazil Classics 1: Beleza Tropical (Luaka Bop, 1990). Now, with publications such as The New York Times trumpeting an “African invasion” in indie rock and a fascination with African music takes hold once more — morphed and bent to new ends by performers ranging from Vampire Weekend to Dirty Projectors to this year’s Pazz and Jop poll-topping tUnE-yArDs — the time seems right to revisit Fela’s legacy.

Long before African outfits like Tinariwen and Blk Jks threaded rock ‘n’ roll guitar into indigenous rhythms, and hipster-cred comps such as the Ethiopiques and Congotronics series touched down stateside, Fela was hybridizing jazz and highlife with a potent dose of James Brown-style funk, a black power sensibility (not for nothing did he dub himself the Black President), and a driving thirst for justice, even after being jailed some 200 times, suffering at the hands of soldiers (the wounds Fela revealed when he dropped his trousers in the 1982 documentary Music Is the Weapon are heartbreaking), and undergoing a level of government harassment and abuse that would break most mortals. It all appeared to climax in 1977 after the release of his military-mocking 1977 LP Zombie (Barclay) and the subsequent invasion of his Kalakuta Republic commune by soldiers, which led to the death of his mother and the beating and brutalization of the performer, his family, wives, and friends.

Though mainstream superstars Will Smith and Jay-Z threw their producing weight behind the recent Tony Award-winning musical production of Fela!, it’s tough to imagine an artist quite like Fela in today’s music scene, fighting back from the top of the pop charts, occupying the public imagination with his radical politics and spiritual beliefs, and speaking his mind, loudly and outrageously. Still, Fela’s story and music speak louder than ever, especially in the context of indie’s less-than-political appropriation of African sounds, the recent SF run of Fela!, the 2011 rerelease of Fela’s Universal-controlled albums in North America by Knitting Factory Records, the upcoming film directed by artist-filmmaker Steve McQueen, and continuing tide of injustice in Nigeria, where weeks of protests continue over fuel prices and the country has undergone its worst oil spill in a decade.

“The thing that’s most interesting about Fela’s music is how traveling and seeing other cultures, going to the United States, and getting familiar with American music and James Brown and American politics inspired him to fulfill his own roots and look back on himself and to really see these international forces as part of his background and his own culture,” observes Will Magid, 26, who organized the Fela dance party and has played with Odukogbe and Okulolo. Magid’s own forthcoming debut album promises to mix Kuti’s influence with Balkan, pop, and funk sounds. “We need more people who are like that and who are speaking up.”

El Cerrito-by-way-of-Nigeria bassist Okulolo played with Fela as well as King Sunny Ade and has performed with Odukogbe in the Kotoja, the Western African Highlife Band, and the Nigerian Brothers. Magid’s friend and mentor since the two met through Okulolo’s son at UCLA, the musician sees “Fela Kuti Extravaganza” as a teaching opportunity.

“Fela was a great musician, and his music will never die,” says Okulolo. “I think it would be a good idea to continue educating people about his music and how beautiful it is. I worked with [Fela] briefly, and I know the man well, and so many bands are playing Afrobeat now — generally the music needs to be out there.”

“It has funk; it has jazz; it has an African beat; it has everything,” he continues. “It’s our opportunity to showcase it to as many people as we can and make it valuable, to put it in a category that someday will be what reggae is today.”

And during hard times, we can all learn something from Fela, his still-vibrant music, and his way of moving, fluidly and artfully, through oppression, through pain. “There’s this element of social consciousness, of people dancing and then hearing about these oil spills,” muses Magid of the upcoming dance party. “It’s a different kind of dancing when you’re dancing through suffering.” *