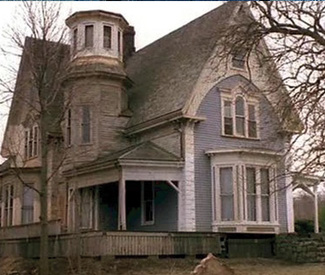 TRASH It takes a certain kind of sicko to fall in love with Italian horror, what with all the oozing maggots, spurting jugulars, WTF plot twists, weird zooms, jarring musical cues, and supporting characters who do completely bizarre things that are never explained.

Sickos take note: Yerba Buena Center for the Arts is screening an uncut 35mm print of Lucio Fulci’s 1981 The House By the Cemetery. HUGE. Within the gore-splattered Fulci canon, House is maybe not as well-known as 1981’s The Beyond, 1980’s City of the Living Dead, or 1979’s Zombie (which made a recent local appearance thanks to Blue Underground, the cult champions also responsible for this showing of House). But it’s no less essential or enjoyable than the others, despite suffering from one nearly insurmountable flaw. (More on that that in a minute.)

House‘s story is actually pretty straightforward, as Fulci flicks go. After a mysterious murder-suicide claims his colleague, professor Norman Boyle (Paolo Malco) uproots his family, including wife Lucy (Fulci scream queen Catriona MacColl) and young son Bob (Giovanni Frezza), from New York City to small-town Massachusetts, where he plans to finish the dead man’s research. Fate or something worse means the Boyles will be bunking in “the Freudstein place,” a notorious mansion once occupied by “a certain Dr. Freudstein — a turn-of-the-century surgeon with a penchant for illegal experiments.” Uh-oh. That the family is merely renting this sinister abode is ignored by the film’s ad campaign: “Read the fine print. You just may have mortgaged your life!”

That may be so, but the truth is Bob’s dubbed-over voice is the scariest thing in this movie. Among the House DVD extras is an interview with a grown-up Frezza; the first thing out of his mouth is an apology. (His later filmography includes Lamberto Bava’s ludicriously amazing 1985 Demons, so he’s off the hook as far as I’m concerned.) It’s a distraction that elevates Bob from a mere rip-off of the kid in 1980’s The Shining, an obvious House influence, to eardrum-torturing moppet from hell.

Fortunately, the rest of House is weird enough to cushion this sonic godawfulness, or at least blunt it a bit; it helps that the other kid in the movie — Silvia Collatina as Mae, the Scatman Crothers to Bob’s Danny Torrance — sounds perfectly normal. There are plenty of juicy bits for Italian horror geeks, including Ania Pieroni as a creepy, glaring babysitter (doing a slight variation on her creepy, glaring Mother of Tears in Dario Argento’s 1980 Inferno) and Carlo De Mejo (star of City of the Living Dead) as a helpful librarian. The traditional Fulci cameo casts the director as Dr. Boyle’s bow tie-wearing academic peer, uttering the immortal line “I adore New England!”

Speaking of, the titular house actually exists, though it’s not actually located by a cemetery as advertised. Also the setting for Umberto Lenzi’s 1988 Ghosthouse (sickos know Lenzi’s name well, thanks to grindhouse nuggets like 1981’s Cannibal Ferox and 1980’s Nightmare City), it’s the historically significant Ellis House in Scituate, Mass. No word, however, if the arts association that now maintains the property accommodates curious horror fans — or if the basement décor is still keepin’ it funky.

THE HOUSE BY THE CEMETERY