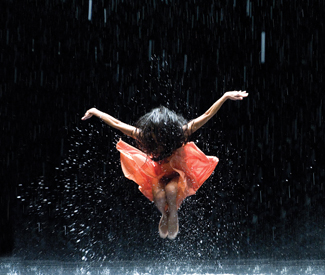 FILM/DANCE Watching Pina Bausch’s choreography on film should not have been as absorbing and deeply affecting of an experience as it was. Dance on film tends to disappoint — the camera flattens the body and distorts perspective, and you either see too many or not enough details. Avatar (2009) certainly didn’t convince me that 3D was the answer.

However, improved technology gave Wim Wenders (1999’s Buena Vista Social Club; 1987’s Wings of Desire) the additional tools he needed to accomplish what he and fellow German Bausch had talked about for 20 years: collaborating on a documentary about her work. Instead of making a film about the rebel dance maker, Wenders made it for Bausch, who died in June 2009, two days before the start of filming.

Pina is an eloquent tribute to a tiny, soft-spoken, mousy-looking artist who turned the conventions of theatrical dance upside down. She was a great artist and true innovator whose thinking was crucially shaped by her work in the 1960s with Antony Tudor and the team of Donya Feuer and Paul Sanasardo.

Wenders’ great accomplishment in this beautifully paced and edited document is its ability to elucidate Bausch’s work in a way that words probably cannot. While it’s good to see dance’s physicality and its multi dimensionality on screen, it’s even better that the camera goes inside the dances to touch tiny details and essential qualities in the performers’ every gesture. No proscenium theater can offer that kind of intimacy.

Appropriately, intimacy (the eternal desire for it) and loneliness (an existential state of being) were the two contradictory forces that Bausch kept exploring over and over. There is something absurd about the way her dancers never tire of being curious, silly, cruel, childish, hysterical, loving, and angry. The nobility and desperation comes from not giving up.

By taking fragments of the dances into the environment — both natural and artificial — of Wuppertal, Germany, Wenders places them inside the emotional lives of ordinary people (subjects of all of Bausch’s work), where there is room for a man with rabbit ears to ride public transportation and couples make love at intersections.

In Bausch’s work, sets — deluges, walls that crumble, hippos, mountains, floors made from dirt, grass, and carnations — are the obstacles that challenge and dwarf the dancer. Wenders chose his outside “sets” brilliantly to similar effect. Many locations are huge: gyms, factories, convention halls, and quarries — and the performers are clearly strangers.

The 3D technology Wenders uses rarely jumps out at the viewer. Instead, his space has a sheen and glassy quality that is non-realistic; it seems to pervade the whole film even in its more conventionally-shot sequences. While it’s good to see dance’s physical multidimensionality, perhaps even more satisfying is Wenders’s juxtaposing of different senses of dimensionality into a coherent whole that I suspect Bausch would have approved of. It’s the artifice and not the realism that makes Pina the fine work it is.

Before her death, Bausch had chosen four choreographies as the film’s core material. They were excellent picks, though it’s curious that three of them are quite early while Vollmond is her last complete work, more in the genre of her later “travel-inspired” pieces. Perhaps she meant to tell us something. Café Mueller shows a young Bausch in a dreamy, nightmarish labyrinthine environment; The Rite of Spring starts her investigation of male-female struggles; and Kontakthof is a work about the eternal mating frenzy as danced by her own company, a group of seniors, and an ensemble of teenagers.

Not pre-planned, however, was Wenders’ brilliant decision to include “interviews” with the dancers. They silently look at the camera but their grief-stricken faces speak of loss, loneliness, and a sense of abandonment. They were thinking about Bausch’s death, but perhaps also about her work. *