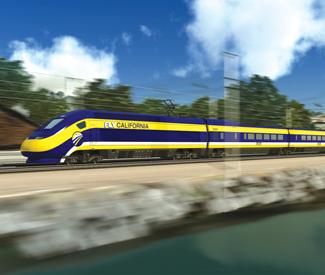 California Gov. Jerry Brown this morning used a big portion of his annual State of the State speech to promote the construction of a high-speed rail system for California – a project that has been under attack by conservatives, as we reported in this week’s paper – chiding those who believe the state can’t do big things anymore.

“Contrary to those declinists, who sing of Texas and bemoan our woes, California is still the land of dreams,” Brown said, a theme that he developed and returned to throughout his speech, calling them “critics who fantasize that California is a failed state.”

Instead, Brown optimistically called for California to take on big projects, singling out high-speed rail, the conversion to sustainable energy sources, and a major water project that will address environmental issues in the Delta and the needs for drinking water and agricultural uses.

But it was the high-speed rail project, for which the Legislature must approve the issuance of bonds this year, that Brown used to make his strongest statement against retreating from big ideas, noting that California can’t simply build enough new freeway and airport expansions to handle a growing population.

“Those who believe that California is in decline will naturally shrink back from such a strenuous undertaking. I understand that feeling but I don’t share it, because I know this state and the spirit of the people who choose to live here,” he said.

And he exhorted Californians to remember the past as they plan for the future: “Critics of the high-speed rail project abound as they often do when something of this magnitude is proposed. During the 1930’s, The Central Valley Water Project was called a ‘fantastic dream’ that ‘will not work.’ The Master Plan for the Interstate Highway System in 1939 was derided as ‘New Deal jitterbug economics.’ In 1966, then Mayor Johnson of Berkeley called BART a ‘billion dollar potential fiasco.’ Similarly, the Panama Canal was for years thought to be impractical and Benjamin Disraeli himself said of the Suez Canal: ‘totally impossible to be carried out.’ The critics were wrong then and they’re wrong now.”