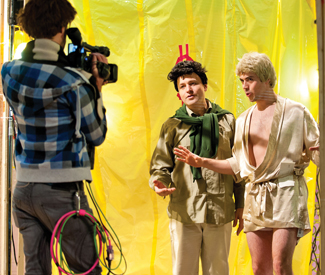 THEATER The shows have been as varied and changeable as the weather this January in New York City, where the annual conference of the Association of Performing Arts Presenters (APAP) acts as catalyst for, by now, no less than four new-work festivals in the realms of theater, dance, and contemporary performance.

Near the beginning of the month, it got cold enough at night to make your nose hairs chime like little Christmas tree bells. “Every time you sneeze,” a friend explained to me, “a whole shitload of angels get their wings.”

This cheerful seasonal exchange took place in the Lower East Side during a frigid tromp to American Realness, a three-year-old festival offering a vital focus on contemporary dance and performance. Spread across three stages at the Abrons Art Center, American Realness is the brainchild of Ben Pryor, the festival’s 29-year-old curator and producing director, and once again features an eye-catching list of leading and emerging artists.

Indeed, 2012’s 11-day program (Jan. 5-15) is really pulling out the stops. Performances I’ve seen thus far have run a wide gamut, in every way, but have consistently attracted capacity houses to American Realness’s intriguing blend of the known, infamous, and brand new.

In addition to full-blown productions, the festival has added a new free series this year, “Show and Tell,” offering an opportunity to hear artists discuss their work or to glimpse work-in-progress. One recent afternoon was given over to a three-way discussion among songwriter and performance-maker Holcombe Waller, Cynthia Hopkins (at Yerba Buena Center for the Arts recently with The Success of Failure (Or, the Failure of Success)), and Miguel Gutierrez (last seen locally in July at the Garage with his solo, Heavens What Have I Done) about contemporary song-based performance. The Bay Area’s Keith Hennessy was on hand a couple of days earlier to discuss his collaborative project, Turbulence: A Dance About the Economy, which just had a two-night showing in December at CounterPulse. (Hennessy also premiered Almost, a “spontaneous performance action,” during the last week of the festival.)

Those three initial shows together sounded an eclectic key that has been sustained throughout. The cold weather not so much. A few days later it was unseasonably warm. People tried to act concerned about it. Surely this was another sign of impending climactic collapse. But it was just too nice to care very hard about why it might be wrong.

The relaxed mood encouraged by the sudden warming trend was further augmented by an intimate little walking tour called Elastic City. Artists Todd Shalom and Niegel Smith conduct small groups of people around the grounds of the Abrons Art Center, training everyone’s attention, with a gentle and inviting playfulness, on the smallest and most quotidian details imaginable — with low-key but delighting results. A passage down one maintenance hallway, for instance, was an invitation to notice any little detail that caught the eye and stimulated the imagination and to share it with anyone around you, turning the seemingly bare walls into a topography that might have given a 16th-century explorer the chills, or … a woody. At one point, our guides led us outside barefoot onto the wide concrete steps in front of the building, for what was no doubt originally conceived of as a brief but striking encounter with the winter elements. Everyone stood there comfortably, however, thankful for the temperate bath of fresh air. “Yeah, it’s not very cold,” agreed Shalom. “Actually, it’s not cold at all.”

A couple more memorable moments as of this writing: Daniel Linehan spinning in a circle for a very long time, declaiming, “This is not about anything” — and variations on that theme. The young choreographer-performer (who’s worked with Big Art as well as Miguel Gutierrez, among others) delivered these poetically schematic lines at intricate length, in a voice precisely doubled by an offstage “doppelganger” piped through a nearby speaker, demonstrating a fairly wowing memory and focus, while alternating both the speed and shape of his whirling form to create a kinetic sculpture of transfixing beauty.

The stunning solo Not About Everything faltered only momentarily for me, when Linehan, pulling out and “reading” a self-conscious letter about his own art and practice from his pocket, shifted from mathematical-geometric abstraction to the all-too-specific. It was an almost rude awakening from a kind of syntactic ecstasy — the motive, unmooring meaninglessness of the mantra — back into the semantics of worldly and solipsistic concerns. It was saved ultimately by a combination of Linehan’s acuity and alacrity as a thinker and performer, however, and it was as fine, moving, and memorable a solo as any seen thus far.

Ann Liv Young presented a desultory piece called Sleeping Beauty Part I that held few surprises for anyone remotely familiar with her work. But the audience was caught off guard at one point at least, as Sleeping Beauty, having completed a Showgirls-style dance of seduction, pleads for understanding from her Prince Charming (a blowup doll sitting in the first row of the packed Experimental Theater). At that moment a soap machine above the stage suddenly erupted with a noisy rush of air and fluff, casting a snow-like arc of fine goo down onto the heads of maybe a third of the house, producing amusement and irritation in more or less equal measure. Only one patron actually got up and left. The rest sat stoically, trying to stifle coughs and sneezes for the next 20 minutes as the finer, mistier particles of whatever is in that stuff began lining breathing passages.

The remainder of the show was given over to an invitation to have your Polaroid portrait taken with the Sleeping Beauty (two bucks a pop). There were enough takers to drag this process out about half an hour. Then the performers left the stage. More ALY concessions were on sale as you exited.