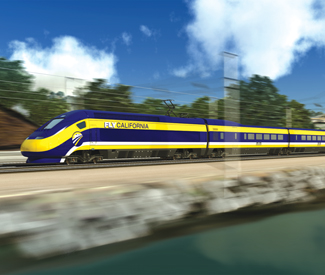 After weeks of attacks from critics of the high-speed rail system now being built in California — a campaign that even came home to San Francisco City Hall last week, when Sup. Sean Elsbernd challenged Mayor Ed Lee on the issue and called for a hearing — Gov. Jerry Brown and other supporters have stepped up efforts to keep the train from being derailed.

With seed money from a $10 billion bond measure that California voters approved in 2008 and an initial federal grant of $3.3 billion to help build the Central Valley section of the track, the California High Speed Rail Authority is working on construction of a bullet train that would carry riders from San Francisco to downtown Los Angeles in about 2.5 hours, traveling at speeds of up to 220 mph. That project is slated to cost nearly $100 billion, and the next phase would extend service to Sacramento and San Diego.

But Republicans in Congress and the California Legislature began to balk at funding the project last year. Earlier this month, a report by the California High-Speed Peer Review Group recommended that the Legislature indefinitely delay issuing $2.7 billion in rail bonds, citing the uncertainty of future funding sources and problems with the project’s business plan.

“It does not take a rocket scientist to see the future of high-speed rail is in serious doubt,” Elsbernd said at the Jan. 10 Board of Supervisors meeting, where he used the monthly mayoral question time to ask Lee, “What is Plan B with Transbay Terminal if the high-speed rail money does indeed go away? What do we do?”

The Transbay Terminal is now being rebuilt downtown. The first phase includes a $400 million “train box” being built with high-speed rail funds, and the next phase will require billions of dollars more to build train tunnels into the station from the current Caltrain terminus at 4th and King streets.

“I’m committed to seeing the full implementation of high speed rail, which includes having a northern terminus at the Transbay center,” Lee replied, refusing to entertain the idea that the bullet trains won’t be coming into San Francisco, a stand he communicated to state officials in a recent letter. “I want to state my unwavering support for the notion of high-speed rail. It is the future of transportation in this state.”

Lee acknowledged that cost estimates for the project have gone up and there are uncertainties over future funding, but he said the state will need to make the investment either way. “California is growing and those people need to move up and down the state. The question is do we make transportation investments on bigger, wider highways and airport runways? I’d say no, that this perpetuates a car-dependent culture.”

Instead, Lee says the state must find a way to build high-speed rail, whatever the obstacles. But Elsbernd called for a hearing on the issue before the Board of Supervisors, telling the Guardian that he supports the project, “but high-speed rail is in trouble and we need to acknowledge that.”

Meanwhile Gov. Brown — who has rejected calls to delay issuing the rail bonds — was working behind-the-scenes to get the project back on track. Sources say he asked for CHSRA Executive Director Roelof van Ark and CHSRA Board Chair Tom Umberg to resign, which they did at the Jan. 12 meeting, with Brown appointee Dan Richard becoming the new chair.

Richard and fellow new Brown appointee Mike Rossi spearheaded the creation of a proposed new business plan for the project that was unveiled in November. While it addresses some of the criticisms of the project, it raises fresh concerns about whether the bullet trains will arrive in Transbay Terminal.

In fact, it calls for high-speed rail service to end in San Jose, where S.F.-bound riders would have to transfer to Caltrain, largely to placate citizens and politicians on the peninsula who have objected to trains rocketing through their communities and filed lawsuits challenging the project.

“That business plan is unrealistic and unreasonable,” said Quentin Kopp, the former state senator from San Francisco who authored of the original legislation to create high-speed rail and has helped shepherd the project. He said having to transfer twice from S.F. to L.A. would discourage riders and hurt the project.

Kopp isn’t a fan of the Transbay Terminal rebuild, which he derides as “a real estate project” because its funding plan relies on significant private residential and commercial development; he’s called for the trains to stop at the current Caltrain station for financial reasons. But Elsbernd — who also chairs the Peninsula Corridor Joint Powers Authority, which operates Caltrain — wants to ensure the Transbay project is completed and worth the investment.

“I’m terrified that we continue moving along and then we end up with that being just a big, beautiful bus terminal,” he told us.

Adam Alberti, a spokesperson for the TJPA, said California needs to have improved rail service to handle a growing population and the Transbay Terminal is being build to accommodate that, whether it be Amtrak, Caltrain, or high-speed rail trains coming into the station.

“We are steadfast in our belief that it makes sense to have high-speed rail in California,” he said. “When it does happen, we will have the infrastructure already in place to receive it.”

Furthermore, he expects that the CHSRA business plan, which is the subject of a public comment period that ends Jan. 17, will extend the service beyond San Jose. “They’ll lose significant ridership and revenues if they don’t bring it into San Francisco,” Alberti said.

“What is the alternative if we don’t do this? California will grow by 10-20 million people in the next decade. There’s no way we could build enough freeways and airport expansions to handle that,” Leno told us. “I don’t think we have the option not to make this work.” Leno also said he was pleased to see top political leaders stepping up to defend the project: “I’m impressed by the governor’s steadfastness, as well as President Obama’s stand. Leadership from the top is important, particularly during difficult times like this.”