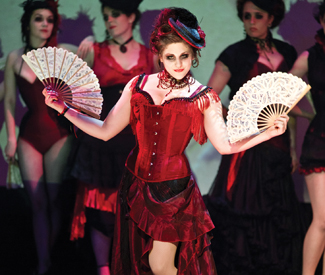 SUPER EGO Wax up your handlebar mustache, dust off your stripy topcoat, burnish your steampunk petticoats, and oil those wheezy accordions: The Edwardian Ball, that phenomenal annual gathering of exquisitely decked-out freaks, is back for its 12th installment of mannered mayhem. This time it aims to quell any kvetching about crowding by stretching itself over five official local events (and a satellite ball in Los Angeles next month). But the Fri/20 World’s Faire and the Sat/20 Ball itself will still be the main attraction for thousands of Friends of Ed.

Where did it come from, the distinctly San Franciscan style that the Edwardian Ball represents, the curious — and, in some pale lights, socially conservative — amalgamation of circus revivalism, steampunk mechanicals, Wild West gumption, burlesque peekaboo, 1990s anarcho-sincerity, and more than a hint of Burning Man fairy dust? The ball itself, launched in 2000 by Justin Katz of “premiere pagan lounge ensemble” Rosin Coven and Mike Gaines of the neo-cirque Vau de Vire Society, delectably conflates affection for Edwards Gorey, author, and Windsor, British king, producing a turn-of-the-last-century high-brow goth fantasia that’s impossible to resist. There’s more than a hint of Burtonesque Scissorhands-worship in there as well, bringing our Ed count to three. (Check out my revealing interview with founder Katz.)

Like absinthe, the ball’s drink of choice, I savor this native subculture most in small, strong doses — sometimes its sheer mass can overwhelm, and its style seems always in a state of coalescence rather than expansion. (An Edwardian Ball in 2112 would, and probably should, be much like the one this week, hover-bikes notwithstanding.) That’s why the ball’s a perfectly cromulent occasion to check in on the dark-eyed, ruby-red, velvety feast of one of our essential undergrounds. Promenade, anyone?

BENEFITS FOR DJ TOPH ONE Beloved “wino” Toph One got struck while riding his bike by a hit-and-run driver on Sun/8 and was hospitalized with a broken pelvis and internal bleeding. The DJ, bike activist and annual AIDS Rider, and party promoter (of the incredibly long-running Red Wine Social and Pepper) is OK and in good spirits now. And the great Bay Area nightlife scene is banding together once again to help out a friend in need. There are going to be two big benefits — all proceeds going to Toph’s bills — that are also serving as major bay talent summits. One’s at Public Works (Fri/20, 9 p.m.-3 a.m., $10. 161 Erie, SF. www.publicsf.com) with J-Boogie, Jimmy Love, Matt Haze, Pleasure Maker, E Da Boss, Chris Orr, and many more. The other’s at SOM (Sun/22, 8 p.m., $10–$20 but no one turned away. 2925 16th St., SF. www.som-bar.com) with Billy Jam, Sake One, DJ Pause, Rolo 1-3, Rascue, Jah Warrior Shelter Hi-Fi, and tons more. Get well soon, buddy — and anyone with information on the crime please call the anonymous police tip line at (415) 575-4444 or send a tip by text message to TIP411.

One day, I will write an entire book about French techno polymath Laurent Garnier’s seminal 1993 “Acid Eiffel,” a monumental track whose throbbing chords (not quite nabbed from Mr. Fingers), squiggling acid jabs, and cheeky whale-song bass figures pretty much audibly nailed where my rave-fatigue head was at back then. He hasn’t been here in a decade: this time he arrives as part of the trio LBS (Live Booth Sessions) with Garnier DJing and knob-twisting, Benjamin Rippert on keyboards and Scan X on “machines.” They’ll be tearing through a whole host of electronic styles at this installment of the whip-smart As You Like It roaming party (co-produced with Public Works), throwing some brilliant corners on Garnier’s signature ecstatic style. With M3, Rich Korach, Briski, and P-Play.

THE QUEEN IS DEAD

Honey, is she ever! There has actually been quite an uptick in Smiths tribute nights (maybe making up for Morrissey’s string of Bay Area concert cancellations?). And this monthly one, celebrating a year on Saturday, is the Frankly Mr. Shanklyest of them, with a wide range of melancholy jangle-pop tunes and DJ Mario Muse on decks. Unhappy birthday!

The classic Detroit techno Burden Brothers whose seminal “I Believe” and “Black Water” will always get me on the dance floor hollering and waving my arms around like the homosexual muppet I am have been touring successfully. Catch them on the swell Club Six sound system.

Kooky-rad monthly queer and friends party Dial Up dials up a special Friday night with Berlin ‘s Souki, whose deep-but-friendly techno prowess is making recent waves. She’ll be performing a live PA, sure to get funky.

Some great beats have come out of the rounds leading up to this grand wobble finale — nice to see so much local talent holding forth (and stretching the often narrow dubstep definition.) Come jiggle and support finalists Fivel, Taso, and Kontrol Freqs at the new Fuel Lounge (formerly Etiquette).