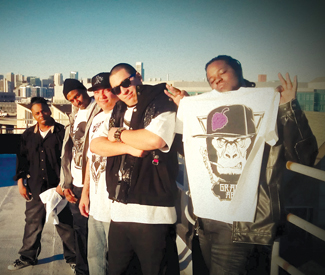 HERBWISE The Kings of Destruction, more popularly known as KOD, were an hour and a half late for our interview. Being that the hip-hop-graff-clothing-medical-marijuana-advocacy collective is from the East Bay and we had arranged to meet at the Guardian Potrero Hill office, I figured I’d better look for them.

I didn’t have to go far: all five of the group’s members who had stopped by were sitting amid SF political activists in the Guardian conference room, mistakenly ensconced in a discussion of the new supervisoral district lines. They’d introduced themselves along with everyone else, but then faltered when the meeting’s facilitator asked to what he owed the pleasure of having Oakland residents at the table.

All good. Soon enough I have Dogz One, Lil’ Zane, Josh, Tase 1, and Don Juan assembled on the roof standing around a picnic table and talking about marijuana. They’ve brought some of their products for show ‘n’ tell; t-shirts emblazoned with characters culled from local marijuana strains. They’ve brought Grape Ape, a gorilla pulling on a joint with a purple berry-emblazoned baseball hat. Another shirt features Chem Dawg, a husky that figures in an upcoming KOD comic book in which the character (Dogz One is his alter-ego) will fight the government’s attempts to keep marijuana from the people. Pending designs include Girl Scouts Cookies, which will feature a woman wearing a midriff-bearing scout uniform in honor of the SF-specific strain rumored to smell of pastries (those buds available locally at the Green Door dispensary).

Kings of Destruction started out as a graffiti crew, and though members still throw up pieces on walls occasionally (“go down around the train tracks, you’ll see some things,” counsels Don Juan) now its focus is on — state — legal activities: music, clothing, and the catalyst for this interview, advocating for medical marijuana. Though I’m unable to hear samples of the tracks before press time, the group tells me members have been in the studio laying down tracks about their medicine, and they hope to join this spring’s Prohibition Tour (www.prohibitiontour.com), a California college event series that plans to raise awareness among students this spring with lectures and musical performances.

“Oakland has been on the forefront of the medical marijuana movement, so we’re trying to keep everything alive so that everyone can keep their medicine,” says Don Juan. Many in the group are patients and growers themselves who naturally find themselves in the activist role around friends and family who don’t use weed.

KOD sees marijuana as a healthy alternative to pharmaceuticals — many of which have adversely affected friends’ lives in their East Bay community. A prime example is bo, as the promethazine-codeine cough syrup that figures prominently in Bay Area hip-hop these days is popularly called. Compared to the dangers of that kind of drug, KOD members say, the federal government’s resistance to legalizing marijuana seems foolish. Not that there aren’t side effects of marijuana: “You might get a little hungry, might go to sleep,” says Don Juan. “You might just lay back instead of getting mad when somebody cusses you out,” adds Tase 1.

In closing, I ask KOD to tell me a story about the group and marijuana. They give each other looks and chuckle. Finally Tase 1 steps up to the plate. “One time, we were going to do something bad. And then we smoked some weed.”