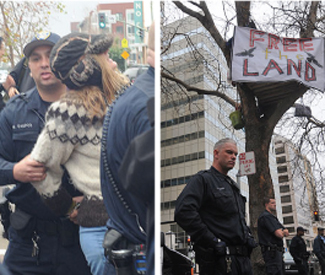 The uneasy relationship between OccupyOakland and the Oakland Police Department has resulted in a troubling spate of controversial arrests recently.

At a press conference last month, Police Chief Howard Jordan stated, “The plaza area outside of City Hall is a public area. We do not have any legal right to remove you if you’re standing there, at any time during the day, if you’re exercising you’re First Amendment rights. If you’re not breaking the laws, we’re not concerned about your presence.”

But now, Oakland police have arrested dozens of people who were doing little more than “standing there, exercising their First Amendment rights” — and one man even faces life in prison for it.

There have been 40 arrests in the last couple weeks, including two incidents at Frank Ogawa/Oscar Grant Plaza. In each episode, police say they were just doing their job, enforcing laws surrounding permit violations. But many supporters and lawyers associated with OccupyOakland say that police have created a targeted and discriminatory campaign to wipe out the movement.

About 100 protesters were present at a permitted vigil on Dec. 30. An OccupyOakland participant had been issued a permit for a teepee and one table, but police showed up at noon to explain that they were in violation of that permit, claiming people were sleeping, eating, bringing in trash cans, and storing belongings in the teepee

Protesters say they were cleaning up the plaza when police started making arrests; police say they refused to comply. But both parties say that the scene turned violent.

“Who instigates the violence? I don’t know,” Matt Perry, a movement supporter, told us. “A cop tells you to back up and you don’t back up, he’s gonna use his baton on you.”

But many of the arrests and citations had nothing to do with assault. Carly says she was arrested for “having a yoga mat under her arm.” She was later charged with obstruction of justice. In an even more puzzling case, 23-year-old Tiffany Tran was arrested and charged with “lynching.”

“The taking by means of a riot of any person from the lawful custody of any peace officer is a lynching,” reads California Penal Code 405a, a felony charge punishable by two to four years in prison.

The law attempts to prevent white mobs from forcibly taking African Americans from police custody to kill them, but police have a history of using it against protesters, stating that anyone trying to stop an arrest is guilty of lynching.

On the fourth day, she was finally arraigned, but prosecutors opted not to file charges and she was released. But Tran said the tactic left her uneasy because prosecutors said charges could still be filed until the statute of limitations expires in a year. As she told us, “Now I feel I can’t go out and express myself as I should be able to.”

When I arrived at 10pm on Jan. 4 to investigate the situation at the vigil, the scene was calm. About 40 people sat and talked, a few worked on computers.

“Some of the people here were arrested mainly for contempt of cop, or being against the government. And then charges of lynching or obstruction of justice were brought after the fact to substantiate an unlawful arrest, to allow the wheels of so-called justice to turn a few more times,” Svend La Rose, an ordained minister and member of OccupyOakland’s tactical action committee, said of the Dec. 30 arrests.

Suddenly, the cry of “riot police!” rang out.

Police cars had pulled up on 14th street, and a line of police exited. In unison, they started advancing, brandishing batons. Many who were at the scene grabbed their possessions and fled. Most just backed away as the cops advanced. A handful stood in front of the teepee, and were arrested on the spot.

Twelve were arrested, including La Rose. Also arrested was Adam Katz, a photographer from the media committee who was documenting events. Katz said that police told him to back up, and when he complied and backed up “probably 50-60 feet,” he was still arrested.

“I took one picture and I was told to back up,” he said. “I repeatedly asked ‘Back up to where?’ as an army of police pushed me out of the plaza. They said, ‘Back up behind the line.’ I kept saying, ‘What line? I don’t see a line.'”

Then there’s Chris, another occupier arrested Jan. 4. According to Katz and other witnesses, Chris had already left the plaza and gone across the street when he was arrested for somehow delaying the police who were trying to clear the plaza.

On Jan. 7, OccupyOakland held an “anti-repression march,” claiming that recent arrests are an overt attempt to repress the movement. The National Lawyers Guild issued a statement demanding an end to the “ongoing violence, harassment, and unconstitutional arrests of Occupy Oakland protesters.”

“There is evidence that would go to show that they were targeting people based on First Amendment activity, and not for illegal activity,” said attorney Mike Flynn, president of the NLG-SF. “Police charged into the plaza and grabbed whoever they could, and also targeted selective people who withdrew and didn’t even linger there.”

But OPD spokesperson Johnna Watson told us these arrests were perfectly legal. “The law allows us to use our discretion,” she said.

A person’s history with the movement is factored into this discretion. Many of those Perry deems “regulars” are, according to the police, “repeat offenders.” As Watson said, “There may be knowledge of a past history, like a repeat offender. If an officer has knowledge that a crime is occurring, has occurred, or is about to occur, we have the right to issue a citation or arrest. If we have someone constantly continuing to break the law, we may not issue a citation.”

In other words, involvement with this political movement can get people arrested who might otherwise not be.

“That police have escalated their attacks on people is pretty disturbing. It looks like they really think they can drive this movement out of Oakland with violence and repression,” said Dan Siegel, a former legal advisor to Mayor Jean Quan who resigned over her handling of OccupyOakland.

Siegel is now representing Marcel Johnson, aka Khali, one of the several protesters arrested Dec. 30, who faces life in prison. A homeless man who became an OccupyOakland regular, Khali was arrested when he tried to hold on to his blanket, which police wanted to throw away, saying that it was unpermitted property.

While in jail, he was charged with felony assault on a police officer, his third strike. A protester called Black Angel who knows Khali said he was transformed by the movement. “He came here and found a family,” he said. “He was like, I’m going to protect this. It gave me some sense of myself.”

But now, Siegel said, “He faces life in prison because of his status of being poor, homeless, and with mental health issues.”

Juries may decide whether OccupyOakland defendants are guilty, but Siegel said the arrests aren’t just: “You still have to ask yourself, why are the police doing this when we have 100 unsolved murders in Oakland?”