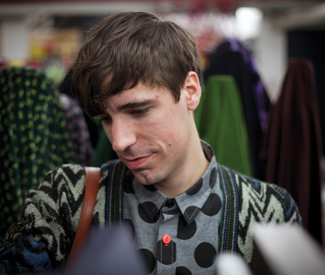 WINTER LOOKS You might have spotted Collin Weber running through the Mission on the way to the Knockout, frantic, with a bag full of satin bows to complete a trio of Sailor Moon costumes. Or perhaps you’ve seen his handy-work elsewhere, in the colorful capes and pointed hats Shannon and the Clams wear in their video for “Sleep Talk” or the sixties striped shifts the Dirty Cupcakes sport in “I Want It (Your Love).”

Weber, a library aid by day and seamster by night, has been creating costumed frocks for an incestuous batch of Bay Area garage rockers for the past two years — Dirty Cupcakes, Shannon and the Clams, Hunx and His Punx, Human Waste — and is open to taking on more acts. ” I think there’s a lot more payoff when you do something and it’s up on stage and out on tour and tons of people see it, and it’s in a music video,” he says leaning against an rack of cloth at Fabric Outlet, “not that I wouldn’t just want to make thing for people to wear. But the costumes are the fun project for me.”

Some of those projects include dinosaur hats, American flag bell-bottoms, gold fake snakeskin skirt and vest combos, and once, for Human Waste, he created full face-masking bodysuits. “The theme they gave me was prisoners on the moon in the future,” Weber laughs. “There’s a whole story behind it, but that’s what I had to go on.”

He created flesh-covering suits, with shiny knee pads and strips of mesh across the mouth and eyes. (Mesh so the band could still see its instruments.) “It’s pretty creepy. The first time I tried it on I was a little scared of my own reflection in the mirror. I think that was a sign that it was going in the right direction.”

I ask if he has his own signature design fixture, something that’s uniquely Weber, and he explains that it can be difficult because he’s often catering to bands’ specific visions, keeping with their imagined themes. Though he says, “one thing that shows up though — and I’ve always been kind of obsessed with — is futuristic, but circa 1960. Special effects, when people tried to guess what people would be wearing in 2012. Shiny, still really mod, but futuristic.” He smiles sheepishly, Queen’s “We Are The Champions” comes pumping through Fabric Outlet’s speakers.

Weber’s style is also influenced by David Bowie circa Ziggy Stardust era, and the designer of those costumes, Kansai Yamamoto. He drops references to the broader glam and loud statement pieces, along with interesting menswear, specifically Comme des Garçons which he describes as “crazy stuff for men that’s just barely wearable.”

His interest in sewing came from a bout of post-college, pre-work boredom while living in Milwaukee. While roommates with Dirty Cupcakes drummer Laura Gravander in the Midwest he learned how to use her sewing machine and begin deconstructing thrifted clothes, doing alterations, and eventually creating his own pieces. He’s all self-taught, and learned through both trial-and-error and diligent YouTube viewing.

Now living in San Francisco (though he moved first with Gravander from Milwaukee to the East Bay), he works shelving books at two library jobs, an aid at the Central Library in Berkeley and a page at the Main Library at Civic Center in SF. He awaits an open librarian position and has kept up the sewing and costume-making as a creative outlet.

Weber mentions that he likes making costumes for bands specifically because there’s a definite deadline: the night of the show. Do or die. He may have been known to run down the street trailing thread, or sew up a piece as the band is about to step on stage, but he also understands the great responsibility of outfitting hard rocking musicians — certain areas must be reinforced, seams must be sturdy because of fierce movement.

And with that comes the punk fate of it all, in sewing costumes for bands, he’s essentially creating what will likely be destroyed. “When you put a lot of work into something, it’s sad to see it get trashed, or blood on it,” says Weber, “but it’s just something you have to take into consideration, whether something just looks nice or whether it’s going to last through rock ‘n’ roll.”