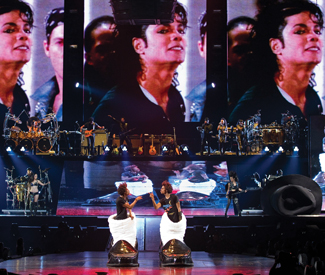 MUSIC There are so many extravagant things you could say about the late King of Pop, our holy father of stage theatrics and sequined gloves, Michael Jackson. The moon-walking man, the storied myth, the embattled legend.

If you want to get at the core of his power, the lifelong devotion of his millions of followers, try to envision a scenario that took place decades ago; look back at a then-12-year-old choreographer named Laurie Sposit, mimicking dance moves in her bedroom plastered with Michael Jackson posters. “I also wanted the red [Thriller] jacket but my dad wouldn’t get it for me, I was traumatized,” says Sposit from a brief stop in Phoenix, Ariz.

Now grown, Sposit has toured the world with the likes of Madonna, Beyonce, and Janet Jackson, but never had the chance to dance on stage with Michael. As of October, she’s been traveling as dance master for Cirque Du Soleil’s newest grand-scale production Michael Jackson: The Immortal World Tour. Says Sposit, “it feels like it came full-circle for me.”

A vibrant, eye-popping mixture of remixed videos, pyrotechnics, elaborate costumery, pulsating live music, breakdancers, high-flying acrobats, and a wealth of that classic Michael choreography (including one routine that appears to be performed in a pair of human-sized black loafers and white socks), The Immortal World Tour reflects, expands, and magnifies the classic Michael Jackson live show — with the expected Cirque flair.

Cirque produced something similarly spectacular with the Beatles catalogue (Love), but this one seems to lend itself even more to the format given the sheer drama of Michael-the-star. Written and directed by Jamie King, the production kicked off Oct. 2 in Montreal and is in the midst of a massive tour, with an eventual, inevitable home in Las Vegas. It incorporates the grand span of Michael’s career; there’s even an accompanying remix album which has been charting since its release in November. It’s all there in the production: Jackson 5 hits, “Billie Jean,” “Black or White,” “Dangerous,” “Thriller” — even “Scream,” the hit duet with Janet. The nearly three hour, approximately $60 million production includes more than 60 performers each night.

One of the production’s youngest performers is 20-year-old Holland-based breakdancer Pom Arnold. In the show, Arnold performs in 10 different numbers and after shows, he says, the dancers often keep moving. They go back to their hotels, order pizza, and dance in their rooms together. “Like breathing for you, is dancing for us,” he says.

A breakdancer since age 10, this is Arnold’s first international production — and by the far the biggest. “I think for many of the dancers this has been one of the biggest productions. It’s Michael. You can’t go bigger, I think, unless you’re working with the man himself.”

The intensity of that comes through in his performance. When Arnold was rehearsing the routine for “Smooth Criminal” with the backing band for the first time, surrounded by other dancers, he was unprepared for the sudden wave of emotion rushing through him. “I got goosebumps on the stage. And that never happened to me before, dancing and getting goosebumps,” he says in a phone call from tour.

Sposit too has felt the connection. As dance master, her responsibilities include overseeing the choreography to help maintain the integrity of the production. During the first two months of the tour, she cried every time the curtain went up, just as she did when she caught Michael’s tour as a tween. It’s a visceral response to seeing the music enlivened once more. “And I also watch the audience,” Sposit says of her nightly routine, “I’ve seen many people cry. It kind of takes them on an emotional journey.” *