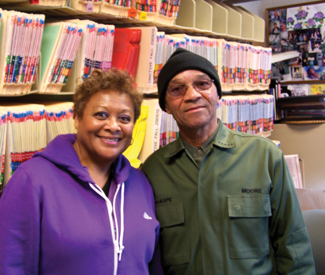 CAREERS AND EDUCATION Wearing a neatly-pressed army uniform in his office at City College of San Francisco Charles Moore, tells a Guardian reporter that he is a warrior for education.

Moore is the recruiter and outreach developer for the college’s Extended Opportunity Program and Services (EOPS) ex-offender counseling program, Second Chance. His team struggles with the fate of underserved refugees from an expanding state prison population (at last count, comprised of 132,887 adults) and the budget cuts that have dug deep into universities and community colleges across California.

Their battle? On a minuscule budget of $150,000 program staff must find a way to help ex-offenders break the incarceration cycle and get a college degree.

And by most counts, they’re winning. Second Chance is fueled by a surprising mix of personal experience, stretched resources, and a steadfast dedication to an underserved student population. It is one of very few such endeavors in the nation.

Moore says one of the recurring problems that ex-offenders face in the school system are Rip Van Winkel moments, inevitable occurrences after years of incarceration. The most minute-seeming technological changes in the world — an automatic-flush toilet for instance, or unfamiliar crosswalk signage — have shaken advisees, sometimes enough to prompt drop-outs.

This kind of culture shock is precisely what Second Chance works to combat, in addition to more traditional academic concerns. Staff wear a number of hats, answering students’ questions about financial aid and programs of study. Peer counselors are also crucial to the program, students who have themselves matriculated with the help of Second Chance and are available to assist those with questions.

“This is a community college,” says Moore. “And we need to be in touch with our community.”

“Second Chance and EOPS really set up a model for similar programs throughout the state and the country,” says Juanita Gray, the program secretary. She has worked from its beginnings as Project Scorpio to the program’s 1981 refashioning under EOPS’ then-director Bill Chin.

Gray remembers the days when inmates would file off the Sheriff Department’s bus and into EOPS, get their handcuffs unlocked, and complete student applications. Nowadays Second Chance, which boasted 120 students last year, sees ex-offenders arrive of their own accord, having already received essential information about the program in prison.

Moore works within Bay Area neighborhoods to spread the word, but more often than not, prospective students seek him out.

“The majority of our referrals come from word of mouth, from within the state’s prison system. People move to the Bay Area for Second Chance,” he says.

Many of the program’s small staff have made it through both a prison sentence and a degree at City College. As Second Chance students they, like their current advisees, received book vouchers, Muni passes, a basic meal plan, priority registration, and advisory support on their journey towards a college degree.

Moore is one of these graduates.

“Those who work in the program are often ‘been there, done that,’ — we understand the struggle of stepping onto a college campus after 25 years in prison,” says Moore.

Like several of his colleagues, Moore passed through California’s penal system multiple times. After one stint, he remembers, “I began to take a serious look at myself. I always had to start over again with nothing once I was released. Things had not changed in my environment.”

But then he found Second Chance. Moore sees the program in stark terms: “education as an alternative to incarceration.”

The program’s staff and tutors say adjusting to a school environment is a major obstacle for ex-offender-students. Jeffrey Masko, who volunteers with eight Second Chance participants each week, tutoring them in English and math, describes the basic challenges for students who are coming from prison time.

“[Second Chance students] sometimes only have one shot, an hour at a library computer, to do their work,” says Masko. “For a lot of these students, there is no ‘later’ — they have to do the work before they get on the bus home, or [maybe if] they have an hour before class [they can do it then].”

If the program’s longevity alone is not enough to prove its effectiveness, statistics help. In the fall 2010 semester, more than 80 percent of students in Second Chance were in good academic standing, according to a 2011 article by program director Ray Fong. Also in that year, students bent on further study transferred to San Francisco State University, University of California at Berkeley, and Mills College.

Second Chancers have gone on to work as drug counselors, social workers, and activists.

“There’s definitely a strange phenomenon [within the Second Chance student body] of giving back,” explains Masko. “Even though they may have spent 10 years in the penitentiary, they look for fields that they can make a contribution within.”

“I haven’t had one person in my office say they didn’t want to give back,” says Moore, “They say it each and every time. And I’m coming up on 15 years.”