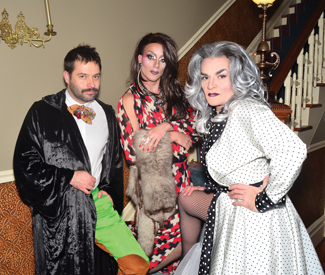 SUPER EGO The slightly “meh” body of 2011 isn’t even cold and already we have two completely ridiculous yet ridiculously adorable, new deliberately manufactured subcultures to pretend argue on blogs about, because who blogs anymore? Seapunks and bronies, yep. I hope they fight, too, because it’d be the 2012 apocalypse in one cute, handy metaphor. Sparkly rainbow annihilation now!

Luckily, both also provide some cotton candy for thought. Bronies (and Pegasisters) are adult fans of “My Little Pony,” spanning the glittery spectrum from dedicated furries to wayward anime admirers. And yes, they dress up, and yes, there was a packed Bronycon in NYC last week. The Brony dance music of choice is variously called rainbowstep, ponystep, or dubtrot, and consists mostly of “My Little Pony”-based samples (“Fluttershy will snuggle you in your sleep!”) laid over basic dubstep tracks.

Many will find this to be divine justice for the much-maligned dubstep genre; I’m fascinated by both the ever-evolving cuddlecore-kawaii movement — humanity is so awesome — and the strange amalgamation of retro commercialism and celebratory fetishism, dancing together to something someone whipped up on a laptop for the occasion.

Seapunk is a bit more complex, a wonderful bit of subcultural engineering masterminded by elfin LA producer Fire for Effect, of underground pop group Ssion, who wanted more environmental consciousness in the club scene. (The original concept came from a “GIF dream” designed by Twitter personality Lil Internet, according to the legend.) Seapunk’s aqueous adherents, mostly in the Midwest but spreading fast — SF just got its first octopussy Seapunk mural at Market and 12th Street — have been characterized as goth mermaids, which certainly captures the look and feel: think turquoise-dyed hair and an embrace of all things oceanic, yay for steampunk jellyfish outfits.

But the whole idea is perhaps appropriately diffuse, nay watered-down: it’s more an “immersive Internet concept” than a pre-packaged lifestyle. And the music isn’t punk at all.

Besides an odd bubbly noise or two, it would be hard to identify any seapunk tracks (by Zombelle, Teams, Slava, Unknown, mostly on the Coral Records label) as anything but deep, dreamy tech house and bass music, a bit drowned-sounding, with those chipmunked rap samples now back in vogue. The lighter side of witch house, maybe.

It’s in the DJ sets, though, that seapunk catches my ear, especially those by Ultrademon. They’re perfectly party-ready, smart but completely nonthreatening, slightly melancholic fun runs you can imagine someone raving out to in a giant polyurethane bubble. But the intermittent, seemingly random fast-slow timeshifts are something more. What if mix tempos could shift suddenly, freely, and often at the clubs — like the currents of our rapidly rising, steadily depleting oceans?

Some Thing turns two: I want to give a special birthday shoutout to one of my favorite weekly clubs, Some Thing (Fridays, 9 p.m.-4 a.m., $7. The Stud, 399 Ninth St., SF. www.studsf.com), which brings a fantastically twisted and hot, hot, hot community of queers and (other) together every Friday for shoestring razzle-dazzle drag shenanigans and afterhours dancing. Helmed by the glorious Glamamore, who celebrates 30 years of drag this year; VivvyAnne ForeverMore, fresh back from dance performances in NYC; and DJ down-E, our king of deadpan cataclysmic retro (why not just throw on some Carpenters occasionally?), this is really one of the hardest working parties in town — no sweat ever shows, though, those seams are seamless. There, you’ll see 10-plus performance numbers covering everything from nonironic Broadway showtune adoration to scandalous punk rock conflagration. Meet me there for a shot or four this Friday — and hit up the Noise blog for my juicy interview.

Look, if you’re in the mood to just rave the fuck out to some good ol’ hardcore electro and minimal techno, you could do far worse than these two French dudes who are not douches, really!

One of the Baltimore’s famed Basement Boys, the energetic house legend welcomes in MLK Day at the soulful Harlum Muziq label monthly, with David Harness and Chris Lum.

HE IS WORKING ME IN THIS CLIP!!