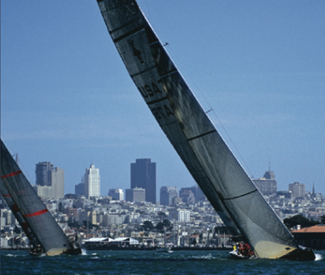 The latest America’s Cup controversy arose with a complaint filed in state court in New York City on Dec. 12, alleging that the Golden Gate Yacht Club (GGYC), defender of the coveted sailing trophy and orchestrator of the prestigious international regatta in San Francisco, unfairly rejected an African American sailing team’s bid to compete as a defender candidate.

In a move that piqued the interest of close observers in the sailing world, the suit also takes things a step farther by challenging the legitimacy of including lucrative waterfront development deals into GGYC’s December 2010 agreement to host the 34th America’s Cup in San Francisco.

The suit invokes a 159-year-old document, the America’s Cup Deed of Gift, drafted after the schooner America won the treasured Cup — affectionately known as the Auld Mug — in a match off the coast of England in 1851. Executed under the laws of New York since the schooner sailed under the New York Yacht Club, the deed establishes the America’s Cup trust, and sets out guidelines that every recipient of the cup must abide by. The suit holds that accepting the cup made GGYC a trustee under the deed, and “each club holds the Cup as ‘trustee for the benefit of all potential challengers.'”

Because GGYC set up its own America’s Cup Event Authority, which stands to profit from San Francisco real-estate development deals without sharing surplus revenue among competitors, the lawsuit charges that the yacht club violated its fiduciary duties as trustee.

“It is clear that GGYC is strictly forbidden from using its possession of the Cup and its attendant duties as trustee … in a manner that directly benefits itself, any of its members, or any third party,” asserts the complaint, filed by Madison Avenue law firm McDermott Will & Emery LLP. “The law strictly prohibits self-dealing by a trustee.”

The lawsuit was filed on behalf of African Dispora Maritime (ADM), a North Carolina nonprofit organization founded by sea captain Charles Kithcart, who developed his skills as a mariner under former America’s Cup sailors and continues to pursue an ambitious dream.

Kithcart says he’s convened a sailing team to compete in the America’s Cup that includes African American Olympian sailors, and held discussions with a prominent Rhode Island yacht designer, David Pedrick, about constructing a qualifying vessel for his team. Pedrick, who’s designed America’s Cup racing yachts before, confirmed to the Guardian that he was willing to work with ADM.

GGYC accepted and later refunded ADM’s $25,000 application fee, but rejected the nonprofit’s proposal to enter the race, saying it wasn’t satisfied Kithcart’s team would have the necessary resources to compete. Kithcart claims to have a fundraising strategy for his America’s Cup bid ready to go, but his anticipated support appears to hinge upon being accepted as an America’s Cup competitor.

“You create a groundswell with the public,” he said. “This is the essence of our organization: It’s going to excite people’s imagination. Money can be generated, and there are people who will fund things.”

Kithcart’s vision extends beyond just racing in the elitist tournament, since that alone “doesn’t fulfill any of the social needs that are not only apparent, but glaring.”

ADM’s mission, he explained, is to train African American youth as competitive sailors, cultivate youth interest in math and science as it applies to nautical skills, and make a splash on the world stage by breaking into a predominantly white sport with a black-led team, á la the Jamaican bobsledders from the film Cool Runnings.

“We can really create inspired minds,” Kithcart said, enthusiastically describing field trips through church youth groups or Boys & Girls Clubs that would educate kids about the history of black mariners and offer the empowering experience of learning to helm a ship. “Our future is the youth.” Moreover, a yacht-building team would be a job-creation engine in tough economic times, he asserted.

The once-debt-plagued GGYC — which rocketed to sailing stardom after billionaire Oracle CEO Larry Ellison joined up, installed his crew members on the board, and clinched the 33rd America’s Cup with his Team Oracle Racing off the coast of Valencia, Spain in 2010 — has approved competitors from France, Spain, Italy, New Zealand, Sweden, China, and Korea for the 34th America’s Cup. The main event, a one-on-one match following all preliminary rounds, is to be held in San Francisco in the summer of 2013.

The foreign teams are known as challengers, but ADM applied to sail as a defender candidate — a U.S. team that would race against Team Oracle in a Defender Series in a bid to represent the U.S. in the 34th America’s Cup.

Under the race protocol drafted by the winners of the 33rd America’s Cup and an Italian team that has since withdrawn as the challenger of record, GGYC stated that it would consider applications from defender candidates. However, it would only accept “those it is satisfied have the necessary resources … and experience to have a reasonable chance of winning the America’s Cup Defender Series.”

Had GGYC accepted ADM’s application to compete, Kithcart’s African American led team would have sailed against Ellison’s Team Oracle crew — a spectacle Kithcart imagines would make fine fodder for national television broadcasts. He remains optimistic that it can happen. “We’re definitely going to get into the America’s Cup,” he told the Guardian in a recent telephone conversation.

That same confidence is conveyed in ADM’s lawsuit. “Indeed, ADM’s application showed that its proposed team quite obviously could beat Team Oracle Racing,” the complaint claims, “and certainly stood a ‘reasonable chance’ of doing so.”

The lawsuit alleges that GGYC ignored Kithcart’s repeated requests to be considered for entry into the competition almost until the deadline last spring, then rejected ADM on an arbitrary and unequal basis compared with its treatment of other competitors.

Three other teams that were accepted as competitors — including Club Nautico di Roma, the challenger of record — have since withdrawn, citing financial problems. The suit suggests these economically troubled teams were accepted as competitors without question even while ADM was rejected, and charges that GGYC made no attempt to determine the status of ADM’s team or fundraising plan.

What it all adds up to, according to ADM’s claim, is breach of contract and a failure to deal in good faith as a trustee. Nor is ADM shy about making demands. The lawsuit asks the court to compel GGYC to accept ADM’s application, reschedule all the planned races in order to hold a Defender Series, cancel the development rights afforded to the Event Authority, and pay ADM in excess of $1 million to compensate for the delay in building its yacht.

John Rousmaniere, an America’s Cup historian who has authored several books about the sailing competition, regarded ADM’s case with skepticism. He seemed doubtful that GGYC could be forced to accept an application from a U.S. team.

“Golden Gate could invite other U.S. yacht clubs to compete for the right to defend, but it has chosen not to do that. Instead, it’s developing its own boat and crew. This is their right under the Deed of Gift,” he said. “The Deed of Gift is very clear — there is no obligation for another American boat to sail.”

He’s also dubious of the charge that GGYC breached its fiduciary duties as trustee by engaging in self-dealing, an argument that could have far greater consequences for Ellison in the long run. A similar dispute arose when the sailing tournament was held in New Zealand about a decade ago, he said, and the exact meaning of “trust” in the Deed of Gift has been debated before in similar arguments. “I don’t think it’s ever been resolved,” he added.

The lawsuit argues that the cup is held in trust for the benefit of all competitors, and that GGYC violated its duties as a trustee when it set up a real-estate deal benefiting its own interests without sharing the wealth. Under the terms of the Host City Agreement, the America’s Cup Event Authority (ACEA) has the potential to lock in leases and long-term development rights for up to nine piers along the city’s waterfront for 66 years, with properties ranging from as far south as Pier 80 at Islais Creek to as far north as Pier 29, home of the popular dinner theater Teatro ZinZanni.

The Event Authority is a California LLC, whose agent for service of process is listed as ACEA board chairman Richard Worth of Lawrence Investments LLC — a technology and biotechnology private equity investment firm controlled by Ellison.

“For the first time in America’s Cup history, it appears that valuable rights generated by a trustee as a result of holding the America’s Cup are being explicitly excluded from the Cup’s net surplus revenue and … being held elsewhere, to the detriment of the competitors,” ADM’s suit alleges.

Rousmaniere says this isn’t the first time a legal argument invoking the Deed of Gift has found its way into court amid an America’s Cup power struggle, and that the issue remains a point of debate. Part from the problem, he believes, stems from the fact that a 21st Century event is governed by a rather vague 18th century document.

“The defender really runs the thing,” he said, referring to GGYC and by extension, the powerful Ellison. The question is, “How much authority is he going to give the challengers?”

“These people have a lot of lawyers working for them,” Rousmaniere observed, referring to GGYC and Ellison’s Team Oracle Racing, which are closely related. “People are taking a big risk here, and they want to be protected. The stakes are so high because there’s so much money involved.”

America’s Cup spokesperson Stephanie Martin referred Guardian inquiries to Tom Ehman, Vice Commodore of GGYC, who communicated with Kithcart about ADM’s application to compete. Ehman, who was taking a holiday in Spain, did not return an email request for comment and could not be reached by phone. However, a statement attributed to GGYC appeared on the blog Sailing Anarchy, which published a report about ADM’s suit.

“GGYC was served today with a complaint filed in the Supreme Court, County of New York, alleging breach of fiduciary duty, among other baseless claims,” the statement noted. “We believe the lawsuit is utterly without merit and that GGYC will prevail.”